Please do not read this angry rant 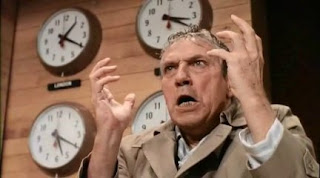 Let me say, at the outset, that I had several good reasons for choosing to take home the PlayStation 3 version of Grand Theft Auto IV, rather than the Xbox 360 version. My PS3 is hooked up to a 26" widescreen, while the 360 is connected to a 20", standard-ratio computer monitor. I just got a Dual Shock 3 last weekend and I wanted to give it a whirl. Shockingly, I have more real-life friends with PS3s than 360s, and I wanted to play with them. And since Rockstar sent one of each to the Phoenix, if I took the PS3 version then my friend at the office could take home the 360 one. All things being equal, it would have been silly of me not to take the PS3 copy.

But all things are not equal.

The ludicrous amount of pre-install time was bad enough. I was willing to put up with it because it was a one-time deal. I am less willing to overlook a non-existent multiplayer mode. For two days running, selecting the multiplayer option has resulted in an error message. I am not alone in having this problem. It seems to be the rule, rather than the exception, for PS3 owners. The biggest game of the year, as shipped, is broken in a big way.

This may not be the game's fault, per se. In fact, it probably isn't. I don't know how the multiplayer archiecture is set up for PlayStation 3 games, but my understanding is that it's not centrally constructed as Xbox Live is (please enlighten me in comments, if you know). Whether this outage is Sony's doing, or Gamespy's, or Rockstar's, or whoever's, it's inexcusable. Was the server load a surprise? Didn't they test this? Didn't they plan for it? How does this happen?

This shows, once again, why early reviews are suspect. Currently, the PlayStation 3 version of Grand Theft Auto IV has a Metacritic score of 100. 100! A perfect aggregate score! And a major component of it doesn't work! (Exclamation points!) Not one of those reviewers had to grapple with the real-world experience of trying to play this game on the PlayStation 3. Their reviews do not reflect the game that was shipped.

Maybe once this gets fixed, the quality of the multiplayer will be enough to make us forgive this little episode. Or maybe, in the rush to anoint TEH BEST GAME EVAR, we're giving ourselves permission to overlook crucial things like poor controls, suspect environmental interaction, and non-existent online functions. This game is fun, and the mission structure is devious in the way it keeps you playing much longer than you intended. I just can't believe amid the flurry of breathless previews and reviews, it never came up until people had already spent their money on the game that it didn't so much work.

But hey, it's Grand Theft Auto! Quit being such a contrarian.
Posted by Mitch Krpata at 9:12 AM

Before you posted this angry rant, I was thinking about your previous post and my Guerilla Reviews suggestion.

It had dawned on me that teh Guerilla Review wouldn't work with any multiplayer game because you would be unable to play online. In fact, I always wondered how pre-release reviews can properly judge the multiplayer component if they're not able to play against the rest of the world. Sure, multiplayer might be great when you're reviewing over a LAN but how's it going to hold up across the globe.

You've made a very good point.

Oh, and in regards to angry blogs, please don't read my last blog either. Except in that I openly abuse someone, somone in power, someone I indeed loathe.

...he wrote, as I unwrapped my just-delivered PS3 copy of GTA 4. Great!

I don't mind the install time, especially if it improves the gameplay. Online multiplayer isn't a huge deal for me, but it sucks that it's not working because I'd at least like to play around with it.

I'm halfway through the install. Now I just hope I don't encounter the Dreaded Freeze.

Fortunately, I haven't encountered the freezing issue, so I have that going for me.

Truth be told, the install doesn't bother me that much, although the game still hitches in places when it's trying to load some data. I don't know just how improved it is over the 360 version. But it's one more problem on the pile with this version.

No freezing so far for me. However....

Rockstar, how effing difficult is it to include an option to invert the camera controls for the horizontal effing axis? Seriously, with all your fancy doodads and whizzbangs and gewgaws, you can't effing include that one basic option? Seriously? That's too much for your army of expert programmers to handle? You should set yourselves on fire. You disgust me and your game sucks and so do you and your children and your pets.

Okay, I have to go meet Niko's cousin at the taxi thing.

Huh, Rockstar are sending me a review copy of the PlayStation 3 version so I'll finally be able to do a direct comparison. If possible, for multi-platform releases, I like to include a short paragraph at the end noting my experience with both versions.

I'm interested now to see how it performs on my console after these issues I've been seeing around.

Well, tonight I'm able to at least get to the multiplayer menu, so that's something.

Im very sure it will be fixed sooner or later. Mine has not yet arrived, but if what you say is true - this flaw is going to be fixed for sure. Perhaps an update?
But tell me -- how is the gameplay? Did it live up to the hype?

Khalfani, I'd have to say no so far. It's certainly good, but it really doesn't seem any different than past GTA games. It has many of the same flaws. But nothing could live up to the hype around this game.

Hey! I know that picture.

"I'M MAD AS HELL AND I'M NOT GONNA TAKE IT ANYMORE."

Anyways, I'm not much of a gamer, so that's all I have to contribute.

Though at least I was aware of what you were talking about.

Coincidence... o_O
I was gonna nag my mother for a PS3 and Grand Theft Auto IV... THX-!!!
At any case, I heard that there is a glitch in the game... You buy a limo and the girls will come chasing after you? =.=" IDK

‘Grand Theft Auto IV has a Metacritic score of 100. 100! A perfect aggregate score!’

I’ve always found perfect reviews of games ridiculous, how can something be 100% perfect?

There’ll always be something wrong with a game for someone. I can’t help thinking most reviews of GTA IV have been based entirely on the hype and not on what’s actually on the CD. The reaction to Bioshock was similar.

Threndil said...
This comment has been removed by the author.
6:43 AM

(Previously deleted to save myself from a horrible spelling mistake)

Luckily, I lack the money to purchase anything other than coffee and cigarettes. Sorry you had to go through that, yet great way of explaining your disdain.