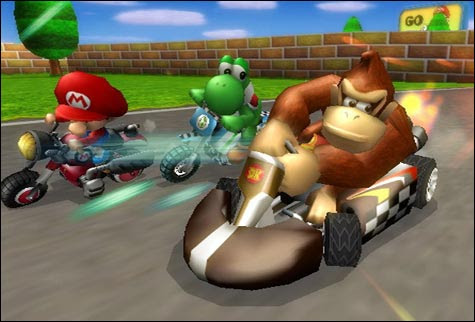 I don't want to pretend that my personal experiences prove any kind of general point about everybody else in the world. Well, okay. I do want to do that. So, anecdotally, it seems to me that everybody is underwhelmed by Mario Kart Wii.

I brought the game with me to a gathering of about a dozen people last Saturday. These are friends of mine going back over ten years, with whom I spent countless sleepless nights in high school playing Mario Kart 64 until we couldn't see straight. So after we played some single-player rounds to try to unlock all the tracks, we started in on four-player.

And stopped after two Grand Prixes.

I was a little surprised. The game sat there, idling at the character select screen, and nobody seemed interested in giving it a go. Not the hardcore gamers, not the casual players that have been such an integral part of the Wii strategy. Nobody saw the Wii Wheel and said, "I gotta try that!"

Then, our host brought out Rock Band, which we played non-stop until almost 2 AM. I don't know what conclusions to draw from this. We already knew Rock Band is awesome, and it's even moreso when you download some additional Queens of the Stone Age and Smashing Pumpkins.

Clearly, we're still into video games. But whatever allure Mario Kart once held for us seems to be gone. I'm sure we would have played it more if there hadn't been such an appealing alternative. I like the Wii version, almost unreservedly. I imagine I'll play it again. Still, whatever secret sauce used to bind its parts seems to have faded a bit.
Posted by Mitch Krpata at 4:39 PM

...whatever secret sauce used to bind its parts seems to have faded a bit.

Even though I've been playing it more than you have, that's a pretty good description of how I feel too.

It seems Mario Kart Wii is flying off the shelves, but the tepid critical reaction makes me a bit worried about the future. Maybe the allure of the stalwart video game franchises is waning. What happens to the industry if people start getting sick of Mario, Zelda, Madden, and Final Fantasy -- a new golden age of creativity, or another crash?

I thought Mario Kart had had its day ages ago. It doesn't have any charm and gets boring after a little while. Tried playing again the other day and was completely bored after about half and hour. I love all the other Mario games, so I'm not sick of that, just the Kart games.
Oh well
Ciao

In response to Dan Bruno; People are starting to get sick of those franchises. Look at Twilight Princess for example, when it first came out everyone was excited about it and really loved their time with it. Fast forward a few months and you start to see people admitting that it wasn't as good as they thought it was and so on. Not sure if the same applied to Mario Galaxy as I avoided anything to do with that until I get my Wii (played TP on the Cube), but it definitely seems to be happening.

With the all the spin offs and sequels for Final Fantasy, it seems like people are 'going off' that franchise too. Obviously Crisis Core was quite popular but the reaction to Final Fantasy XII, the upcoming XIII and the franchise in general doesn't seem to be anywhere near as strong as it was back in the days of VII and VIII. It seems to be like all the old franchises only remain popular because of nostalgic reasons and while yes we still do enjoy the new installments to these franchises at the same time we seem to have moved onto other franchises instead.

With regards to Mario Kart Wii, I can't comment on it because I haven't played it and don't have a Wii. I have played the rest though and well to me, now, it seems like Mario Kart would be a franchise best suited to the handhelds. I mean both Super Circuit and MKDS were very popular (and very good I might add), yet reaction to the last two console installments of the franchise haven't been as good as one might expect. I'm not saying that any future console MK games would be bad, nor am I saying that the Wii version is either, but yeah it just seems like perhaps MK should become a handheld franchise now.

And that wouldn't necessarily be a bad thing anyway. I mean, with the popularity of the DS and to a lesser extent the PSP, it's about time we had handheld only franchises rather than ported versions of console games or new installments of console franchises. I think, anyway...

Nismor34, thanks for the comment. I wonder if people really are sick of the franchises, or if this is another situation where there's a clear divide between critics/hardcore gamers, and the casual audience that makes up much of the Wii's market share. I don't know what the sales numbers are, specifically, but I'd wager that these franchises are selling as well for the Wii as they ever have. Personally, I've been lukewarm on all of the big Nintendo properties this generation, Galaxy excepted, but they seem to be much more commercially successful than in their GameCube iterations. I don't know how to account for this.

For the record, it's meant to be NismoR34 but Blogger makes it lowercase and it confuses a lot of people. Just call me Nismo like everyone else does, I guess.

From personal experience, I'm not sick of the franchises as such but at the same time I think I can say that they aren't as appealing (perhaps in the long term) as they were a few years ago. Perhaps that's because I have grown up now and matured as a gamer, or perhaps that's because the recent installments aren't too different from previous ones or perhaps it's both. None of the above? I can't actually answer that question but it definitely seems like I'm not giving these games as much attention as I used to and that makes me question whether we are getting to the point where we are sick of these franchises. Of course I can only vouch for myself though.

As much as I hate to say it, I don't think the Wii installments of any franchise can be compared to the Gamecube ones. I mean they are within the same franchises obviously, but the overall user base for the Wii compared to the Gamecube is completely different which makes the comparisons really hard. As hardcore gamers (for lack of a better description - by the way nice work with the Taxonomy) we of course enjoyed the Gamecube installments just as much as we do the Wii ones or whatever, but it's just not the same. Since it's 4:25am here in Australia at the moment I'm not quite sure how to best describe my point, but I hope I'm making sense.

Anyway I only recently came across this blog and since this is my first time commenting, I also want to congratulate you on having a compelling blog. I'm still sort of new to reading certain blogs (couldn't ever find decent ones but I have now) so I have hesitated to comment a bit, but if you keep discussing topics I'm interested in well then I dare say you will see more comments from me in the future. So yeah, awesome work mate. (obligatory Aussie slang GET!)

This is odd because it's the first Mario Kart (besides the DS version) I've really enjoyed since the SNES one. I mean the N64 version had a great battle mode, but in addition to the item mix balancing in that it also had horrible rubber-banding AI. It also has a remarkably good online experience, given how much Nintendo's (non-DS) online efforts tend to suck.

However, it really should have included classic battle mode. That's the biggest flaw I could point to at it, that it's impossible to set up a traditional, last-man-standing balloon battle deathmatch. It's remarkably customizable for a Mario Kart battle mode (10 tracks? AI opponents? good lord) so the exclusion of this feels less like oversight and more like purposeful exclusion.