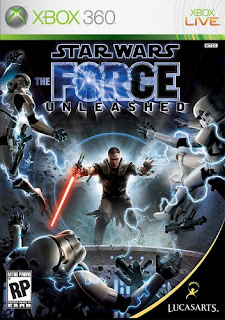 Autumn is in the air. You can feel it in the crispness of these late-summer mornings, see it in the fading sunlight. Most of all, you can hear the rumblings of the fanboys gearing up for what is sure to be the best/worst holiday shopping season EVAR!

For all the interesting and enlightening downloadable games we've been fortunate to play over these past couple of months, come September it's all about going bigger, better, and more badass. It's about pushing graphical limits. It's about increasing the player count in online shooters. It's about picking one game to buy and defending your choice on any gaming message board you can find.

Some folks have already decided: the game for them is Star Wars: The Force Unleashed. And as always, they've taken to the Gamestop.com user-submitted preview page to tell you why.

"RISK" sees hazards everywhere, including his username, but not about this game:

This game looks so cool because u can pick up stormtroopers and they'll hold on to stuff to stay in their spots i reserved it last week and i am ready for the force unleashed omg just buy it you'll love thats y im buying it and u can throw them through windows and use lightning if u played other star wars games ur like its okay but this is worth a perfect 10!!!!!!!!!!!!

Unraveling the parallel thoughts running through that comment is like listening to one of Bach's many-layered fugues. If Bach were tone deaf, that is.

"patsfan365" has a rebuttal to the obvious claims that the graphically superior PS3 and 360 versions are the one to get:

It will not just be a random flick and you slash. I have seen every video possibleabout this game, gone to the official website, saw the control scheme, heard the control scheme from a creator of the game. i've done all the research possible and the lightsaber will bemotion sensitive.

I guess "all the research possible" didn't include Googling this game, which reveals that IGN -- among others -- reports "all combat being centered around the Wii remote's left, right, up, down, and stab motions." Or, you could also say, you flick the remote and you slash.

This will be the best game for the Wii so far by a mile. Star Wars has had some good games with pretty realistic gameplay such as Star Wars Episode III for the XBox and the Playstation but now that Lucasarts has seen the Wii, they realized the full potental of a Star Wars game. The game will be played with the Wii remote as your lightsaber and using the nunchuck for force moves and movement throughout the complex and amazingly detailed world of Star Wars. The new programs that run the game will combine to create the best quality of gaming you have ever seen and I am glad to say that Star Wars is coming out with the game of the year.

It's about time someone came out with realistic Star Wars gameplay. I've yet to play any game set in this universe that accurately simulates the feel of bull's-eying whomp rats in my T-16 back home. I'm sick of them dumbing this stuff down for the game-playing audience.

The 360 version has its supporters, naturally. But they can be tough-minded critics, too. It seems many of them have similar complaints. "A Customer" cuts to the heart of the matter:

One thing i do not like about this game is that when you hit someone with your lightsaber they just fall. I mean come on, your body would be cut in half. They need to make this game rated M instead of T. It's a big turn off when you just hit someone and they just fall over.

Ok so the demo was great! ... Now the one thing I don't like was that when you slash at someone wit your lightsaber they just fell, in Star Wars Jedi academy 2 their lims fell off and that game was rated T. im not even asking for blood (which there should be plenty of) but give me something.

I'm not asking for it to be violent; I just want to see blood, guts, and dismemberment. Although I've got to agree with these guys, to some extent: Imagine if you could use the Force to pick up a disembodied arm to slap around your foes! That would be awesome.

PS3 owners seem a little more optimistic. "uchiha 73" has nothing but kind words to say:

I played this game on ps3 and it was sweet! There's barely anything that i hate. You can't hate this game. It took a while to download, but it was definitely worth it!

That's a quote I'd like to see on the Greatest Hits edition box: "There's barely anything that I hate!" How much do you think uchiha 73 usually hates?

Finally, I want to leave you with the soothing words of "J.O.E."

unlockable charactors maul(double light saber ,that can swatch to 1 saber)
ananikan(black hood) darthvader windu(purple light saber)
luke(in alll black,black glove)darth vader verus darth maul
two sabers( i'm not really good at typing) verus new ,and old jedi,and sith
if i know i can unlock maul (others) i'm consider me buying ,and indursting it.
ARE YOU???? thats gonna make alot,and sell alot . i like wii i've always loved nintendo!
my little cousin loves his wii. I've always loved ps3 . i'm gonna get and x-box elite(thinking about it ???)
i really would a good vreus mode between sith &jedi option. i'm getting the game i like vaders appretence.
he looks awesome yo man on real yo. please put the deulist mode for the ps3 ,and x-box.
yo i'm getting it .but,a good verus would be mind blowing. like revenge of the sith episode III
but better ,yo man do it . that's me joe.?!

I'm going to read this until I can recite it from memory. Truly a masterpiece of avant-garde poetry.

See, this is the power of crowdsourcing. Given such excellence, I'm sure all PR will soon be done this way. Honestly, "he looks awesome yo man on real yo" can't be beaten.

This is made of much, much win.

Semi-unrelated note: do you think people around our age that play are going to turn out like the boomers, only about video games instead of music? Because I already feeling like telling all these kids what to do, and I really shouldn't be feeling old at my age, and not due to anything having to do with gaming.

I can't even imagine what word "indursting" is supposed to be

I'm telling you, you've jumped the shark. These are plants for this blog.

Mike, I wonder about that sometimes. I wonder if younger gamers today feel the same compulsion to seek out seminal works in the same way that music fans or movie lovers do. And should we be demanding that they do so? Probably.

RJO Stewart, there is nothing I can make work in that context. Out of context, maybe "interesting" might have been what he was going for. Nah.