What are your gaming pet peeves? 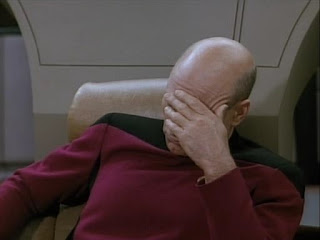 Above: Captain Picard has just lost 20 minutes of his life due to spaced-out checkpoints on the Holodeck.
Yesterday I mentioned that one of my three biggest pet peeves is a bad game camera. In comments, Quinn wondered what some others were. In a bit more detail, here are the 3 things that drive me nuts in any game.

A bad camera. This problem has largely gone away in recent years, as most games let you control what you're looking at. And some games, like God of War, implement an external camera pretty well. But nothing's worse than when you're running along and the point of view suddenly shifts, completely throwing off your sense of direction. Well, maybe one thing's worse: staring at a giant wall between your eyes and the action.

Interminable opening cinematics. When I start a game, I want to do something, anything, right away. I don't want to sit there for 20 minutes watching a movie with the controller in my lap. I would be happy enough to walk my character across the room and then watch the cutscene. Better still would be for the game to tell a story through in-game actions. (An example of a great game that still bugged me for this reason: Okami.)

Sparse save points and checkpoints. It's not so much about the difficulty factor, although it does bug me to lose 10 minutes or more of progress because I've failed to reach a checkpoint. This stuff really bugs me because I want to be able to start and stop my gameplay session according to my own whims. I don't want to traipse across a level for 20 minutes looking for a save point. I don't want to have to keep slogging ahead, waiting for the little "checkpoint" message to appear, before I can go to bed.

That's not a comprehensive list by any means, but any time I come across any of these problems it's like hearing the needle scratch off the record, even in an otherwise good game. There's just no reason for any of them.

What about you? What in a game drives you absolutely batty?
Posted by Mitch Krpata at 7:00 AM

1. Games with huge areas that beg for exploring but which offer no reward for your trouble.

2. Puzzle games that provide no hints whatsoever, even after standing in the same room for and hour.

3. Unnecessarily long and arduous platforming sections in games with engines that do not well accommodate platforming.

There's more but these are just a few of mine.

1. I'm going to second your mention of poorly-spaced checkpoints. The way I see it, if I die and then have to wade through long stretches of the game that I already completed, that's not a challenge - that's a waste of time. I still haven't finished Metroid Prime thanks to this.

2. Quicktime events. Seriously, game designers, STOP IT. Everything about these screams "lazy design." It doesn't make cutscenes more enjoyable (or even, really, more interactive) and it would unquestionably be more fun and satisfying if you could just incorporate whatever badass thing my avatar is doing into the actual game engine. If you can't, just leave it alone.

3. Unskippable cutscenes. Good speakers don't strap their audience to their chairs, do they? I'm looking at you, Assassin's Creed.

Daniel, re: your third pick -- reminds me of all those rotating pillars in the Hades level of God of War. Loved the game, but that part in particular got to be a bit much.

Quinn, your number 2 raises a great point. What's worse than watching your character do all these incredible things in a cutscene, only to be given control and a completely mundane moveset? More games are guilty of this than I can count.

I already weighed in on this yesterday, but I'm going to add another to the pile: games that do not allow you to alter the scroll-speed of the text. Most modern games are pretty good on this, but it ruined Hotel Dusk for me when I was constantly waiting for the text to catch up with me.

QTEs. The only thing that bothers me more than QTEs are the gamers who accept and even encourage that sort of rudimentary "gameplay".

I don't get it: both the media and community were merciless when it came to the FMV games of the Sega CD era for their simplistic "Dragon's Lair" type mechanics. Why is it more acceptable now? Is it because the visuals are in realtime? What the hell difference does that make?

Collecting flags in Assassin's Creed is basically the embodiment of everything I'd hate -- luckily that was optional, but in some games, it's not.

You have to think that QTEs are a way to address the complaint of cutscenes in which your character does awesome things that you, as the player, never get to make him do. But it's true: they're not good now, and they never were. That knife fight in Resident Evil 4 was the only bad part of an otherwise exceptional game.

1. Stealth sections in games that are not primarily stealth games. Splinter Cell and MGS are fine, but I hate playing an action game and suddenly have to sneak around. This is mostly due to the fact that they are always extremely hard and poorly done (XIII is the best example I can think of at the moment), but either way, I'd rather have stealth sections in games designed for stealth.

2. Rubber-band AI. I just really hate that when I'm playing a racing game or a fighting game or something, instead of playing as best as I can, I sometimes have to cripple myself to barely eke out a victory, as otherwise the AI will come back at the last minute and destroy me.

3. Cheating AIs. Now, I understand that in some games (strategy games, in particular), the AI needs a boost to be able to compete with human opponents. But when I'm playing, say, Dynasty Warriors, and an AI opponent suddenly regains all of his health for no reason, there's a problem there.

I could probably think of more, but then again, who couldn't?

Well, you hit my main one with lousy cameras, especially in timed segments. Some of the Dahaka chases in Warrior Within, as I recall, had awful, cameralepsy-inducing viewpoint inversions, which significantly detracted from the immersion. I'm also not a fan of the pointless change-up: intensive platforming in God of War, intensive combat in Prince of Persia, platforming in NiGHTS, stealth sections in RPGs, etc. If you have one perfectly good game, you won't improve it at all by adding a second, crummy game.

1) Fights that are won entirely by timing. For example Alundra 2. I stopped playing because I could never get the timing for the bossfights.
2) Too many characters to choose from. Like in Gensosuikoden.
3) Endless maps to open, but never give anything worthwhile. Like in Dungeon Siege.
4) Platform, platform, platform. It's all about when to jump, when to hit, when to stop running so the giant axe won't come crashing down from the ceiling.
5) That last unlockable I can never get unless I cheat.
6) Save points far and scarce. Bad for when I'm trying to squeeze that few minutes in before lectures.
7) One hit kill moves. Exists in games like Guilty Gear. Lousy when playing with human players. All they want to do is trigger that skill.
8) Unskippable cutscenes.
9) Games that are never produced in English.
10) Puzzles. A little is fine, but at Tomb Raider level, I don't even touch the game.

Infinite bad-guy spawning. If you've run out of ammunition after killing 200 bad guys simply because you've remained hunkered down in the wrong spot, I tend to start throwing controllers.

I have to disagree with the QTE argument, but only under the circumstance that Mitch describes: as an alternative to a long non-interactive and eventful cutscene. I think it can be done well as a mechanism to grab the players attention at a time when the onscreen character needs to react, but it should never be done in long sequences. I'm sure with a little exploration someone can think of a better way to use this mechanic. I do agree that is is absolutely awful mostly everywhere else, especially as "dramatic" conclusions to boss battles. Those make my skin crawl.

The bioshock example is arguably within the context of the game, but I still hate it. I just figure they could have designed something a little more original...

So, in line with the discussion on Quick Time Events, what is your opinion of their use in Okami? For those who have not played, there are several points in Okami at which a cutscene is interrupted (repeatedly) for the player to use a "brush power". Because the player already uses this mechanic almost everywhere in the game, I found that their usage in these scenes was not as jarring as the button presses required in RE4. Are QTEs acceptable if they rely on the usual game mechanics? Or is "quick-time event" a description that just isn't applicable to what's going on in Okami?

Good question, MWC. I remember not realizing at first that I was supposed to be using my brush techniques at some of those points. But it may answer your question to say that when you asked about QTEs in Okami, I didn't remember what you were talking about until you explained further. I think they worked pretty well there.

And again, Okami was also guilty of one of my pet peeves, the way-too-long opening intro. A great game can still overcome this stuff!

Un-pause-able cutscenes. (Or basically, any unpause-able period in the game.) What happens when the pizza gets here baby wakes up right in the middle of a cutscene (that I want to watch)? I hit a button to pause, and the game either (1) ignores me or (2) skips the cutscene, irretrievably so if I don't have a recent save/checkpoint. I should always be given the ability to pause the game.

Anonymous, definitely. It seems like a good solution to me when pressing start during a cutscene pauses it, with the option to skip or resume.