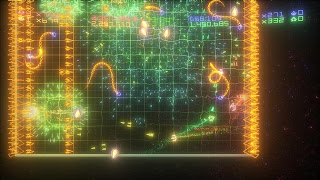 Above: Not a picture of a high score list, but what can you do?
A few people have rightly noted that not all of the Guitar Hero III scores I posted about on Tuesday can be easily and independently verified, so I thought it might be helpful to look at some Geometry Wars 2 scores and see if the pattern holds. Online leaderboards don't seem to be activated on the official website yet, so I'll just use the Xbox Live scoreboards as they appear as of this writing (that's Thursday night around 8:00 PM, Eastern time).*

We'll look at Pacifism mode, because that seems to be the one with the chance for the most ridiculously inflated scores. And indeed, the numbers bear that out.

But the score list goes much further down than that. Exactly how much further, I'm not sure, but the lowest ranking person on my friends list is in the 55,000s, and the scroll bar icon next to my score is about one-fifth of the way from the top. This tells me I'm probably an above-average player, 80th percentile or so. My score of 18,690,325 is a good baseline to set as we look at the top of the list.

By contrast, the drop from the 1st ranked player to the 10th is more than 43%!

What does this all mean? For one thing, it means that even if those Guitar Hero scores weren't fully on the level, the patterns we detected in them were still legit. The best of the best haven't just pushed the outside of the envelope, they've blown right past it and lived to tell the tale.

The scary thing is that someone is going to top Windforce Azumo's ludicrous score. You can bet on it. After all, you don't have to score that highly consistently to set a record -- you just have to do it once. You just have to play the game of your life. Each person's personal ceiling is different, but I'm sure someone out there has the right stuff to blow past 1.5 billion, and probably even 2. I can't wait to see it happen.

*Hilariously, over the course of writing this post I signed out and back into Xbox Live. In that time, I dropped from 15,236 to 15,304. So the numbers aren't exact. But they're close. Anyway, this is supposed to be fun.
Posted by Mitch Krpata at 9:05 PM

I haven't worked out all the calculations on a big chalkboard like the Professor on Gilligan's Island would, but:

Wouldn't it stand to reason that the gaps between different players' high scores would get greater and greater as you moved up the rankings, due to the multiplier effect?

It was something that occurred to me the other day when I finally got the achievement for +1,000,000 points in every mode (barely, since I suck). In the game I was playing, Waves I believe, I had a slightly better run where I survived maybe 10 or 15 seconds longer that usual. What was interesting was that modest improvement netted about 400k more points than any previous effort, about a million.

I don't think I played that much better, or picked up that many more geoms. In fact, that seemed to be the trend for all my games: you score just chugs along at the sub-million level for a good stretch, but then start to spike exponentially. Which makes sense, when you think about it: getting farther = more swarms = more geoms = more multipliers = your score increases at an, er, increased rate.

Even my lame attempts at the game usually net 200x multipliers. This lunatics who are getting scores in the billions... shit, they easily have 500x multipliers going at least, right? At that level, even surviving a few more seconds than the other guy could mean millions of points...

Well that's the thing, isn't it. He's actually *not* 76 times better than you, he may very well be a lot better, and his score reflects that but score does not directly correlate with skill.

The top two players in the world, Windforce Azumo and the next best player are probably actually very very close together in skill, but that slight difference translates into a MUCH bigger difference in score because they are playing at that level. The first commenter hits on part of why this is the case, I think.

Man, my comment was rife with typos. Braid is officially melting my brain.

Gary, it would stand to reason -- everyone who plays the game notices their score increasing much faster as they go along. Still, those gaps are enormous. I would expect players of similar skill to be placing somewhat closer than that. But who knows, maybe once you're above a billion, scoring 200 million or more really is just a matter of surviving for a couple extra seconds.

Ben, you're probably right that he's not 76 times better than me, but it's a funnier way of comparing our scores. Still, it's a point well taken: Immediately after writing this post, I beat my best Evolved score by about 3 million points, improving from 15 to 18 million. While I'm not sure how many spots I jumped on the leaderboards, surely I didn't suddenly become 20% better overnight. It's just a quick and easy way to compare.