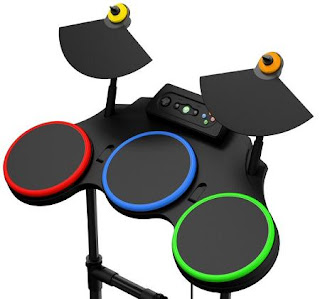 Above: That red ring means the pad is broken.
It wasn't specifically part of my quest to catch up on a few noteworthy releases before the year is up, but recently I had the chance to try out Guitar Hero: World Tour. My love for Rock Band is well documented, as is my recent antipathy for Guitar Hero, but I tried to approach World Tour with an unjaundiced eye. Believe me when I say I do not feel personally gratified for having witnessed -- and even participated in -- the demise of gaming's once most unimpeachable brands.

From what I can tell in one short session, World Tour seems all right -- if not immediately distinguishable from Rock Band. I was most interested in comparing Red Octane's drumkit to Harmonix's. The cymbal placement, surprisingly, made a big difference. I didn't love the feel of the cymbals themselves -- they're just rigid pieces of plastic. They don't swing freely after hits like real cymbals do. But their location above the pads felt just right, and having to cross my right hand over my left to ride a cymbal was perfect.

The kick pedal, though, was much worse. There felt like a centimeter's worth of difference between the up position and the down position. When I first sat down and tried it, I had to ask its owner if it was jammed. No, she assured me, it's just like that. I'm no drummer myself, but we had a set in my house when I was a kid, and one thing I remember about the bass pedal was that it was heavy and complicated, with joints and counterweights all over the place. Rock Band's springier pedal comes much closer to approximating that feeling than Guitar Hero's.

If those were the only differences between them, I'd be tempted to call it a push. Both of those were things you could get used to, no matter which kit you were using. But I've read that lots of World Tour users have had trouble with the pad sensitivity, and this was definitely the case for me. The red pad -- which, as in Rock Band, functions as the all-important snare -- only seemed to be registering hits about half the time. I couldn't tell if it was my placement or my velocity, but I found myself bashing the sticks down as hard as I could to try to get it to take. That led to less bounceback, and worse drumming. Without being able to compare anything else about the two games, Rock Band wins by TKO.

By the way, given that the Rock Band kit now supports third-party cymbal peripherals, not to mention the altogether more real Ion drum kit, the one advantage the World Tour kit has over it is wiped out, assuming you're willing to spend the money. And I am willing to do that? Good god no.
Posted by Mitch Krpata at 9:00 AM

Regarding the cymbals in Rock Band, I'm pretty sure that even though you can get them, it still only plays using four discrete sensors, unlike World Tour's five sensors. I believe Rock Band just duplicates two of the pads onto the cymbals.

@Evan -- I can't speak for the 'stock' drumset, but I own the ION Drum Rocker kit, and the cymbals definitely trigger different sounds. The brain has discreet inputs for three cymbal triggers, and when you play in "freestyle mode", those triggers definitely play different sounds than their color-matched drum pad equivalents.