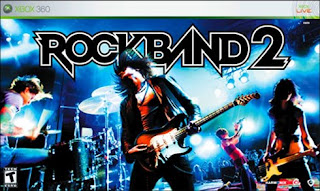 Above: This is the one.
(Note to Harmonix: "This Is the One" would make excellent DLC.)
We're wrapping up our recap of the year that was. Today: the best games of 2008.

If you want to read the blurbs, you'll have to read the feature at thephoenix.com. But for discussion, here's my list of the top 10 of 2008:

A couple things should go without saying. First, yes, I am aware these were my favorite games of the year and not objectively the best. Second, there were more than a few 2008 releases that I missed, although thanks to my cram session I think Fable 2 might be the only serious contender there. But who knows, maybe I would have loved something that got tepid reviews elsewhere, like The Force Unleashed.

I do feel that 2007 was a much better year for games overall. Not that it matters what the calendar says. You could reframe the debate and come out with a much different-looking list, as Iroquois Pliskin does in suggesting that video games completed the Tiger Slam from August 2007 through August 2008. What the heck -- we all enjoy these year-end lists, even if bitching about them is also fashionable. It's nice to take a minute and reflect on what we already have, before rushing headlong onto the next thing. Isn't that what the holidays are all about?

With that, I wish you all a merry Christmas and a happy New Year!

(Posting is likely to be light until January 5.)