The Year in Review: Best of the Blog 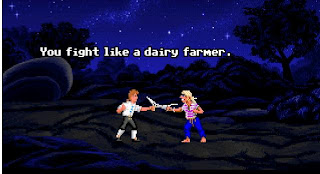 I don't mean to get all introspective and self-centered on you, but on a personal and semi-professional level, this was a great year. I started tracking this blog's subscribers and page views last December. Since then, daily page views have more than quintupled, and the number of feed subscribers has increased more than tenfold. My thanks to all of you.

Just as satisfying was finding so many great blogs that I had no idea existed a year ago (and some of which didn't even exist a year ago). We are heading in the right direction, all of us, and I'll look forward to seeing what 2009 brings.

For those of you who are newcomers to Insult Swordfighting, here are some of the highlights from the past year.

January: The New Taxonomy of Gamers launched. I'll leave it to N'Gai to tell you that it was "the year's most essential blog series." I wouldn't go that far, but I am proud of it. It's the first thing I'd tell somebody to read on this blog, if they asked.

February: Some excellent discussion arose here and elsewhere regarding No More Heroes. I had too much to say about it to confine it to a review, so I wrote a blog-only review to supplement the Phoenix piece, which also triggered an interesting chat with the Brainy Gamer about the auteur theory in games.

March: A look back at sinking ships in games was not the greatest post ever, but it remains one of the most popular pages on this site for Google searches. Plus I have to pick something for March -- which was, if I'm to be honest, a pretty lackluster month, filled mostly with updates on the status of my Wii repairs.

April: Does relying on nostalgia help or hurt games? Is using familiar settings and characters a crutch, or an opportunity to enhance our appreciation for the classics? I looked at the contrasting approaches of Super Smash Bros. and Crisis Core: Final Fantasy VII. Also in April: a big-ass think piece for the Phoenix about video games and social responsibility.

May: Oh hey, another weak month, but I think a post about when a game is finished raises some ideas that should be explored more. Not by me, of course. I have Gamestop users to make fun of.

June: Metal Gear Solid 4 broke my heart. The dialogue and the cutscenes were just too much. If you were to chart my enjoyment of the game as a function of time played, it would look like one of those waterslides that drops straight down.

July: ...right until the the conclusion, in which I stopped trying to convince myself I was enjoying MGS4 on any level.

August: I went temporarily insane, thanks to an overdose of Geometry Wars 2, poring over the leaderboards like somewhere in there was hidden the true name of God. Also in August: what I thought was a pretty good post about user experience never gained much traction.

September: Mega Man 9 has much the same impact as Metal Gear Solid 4, causing me to question my love for the franchise.

October: The year in swooning quiz brings chuckles, guffaws, and, presumably, the undying hatred of everybody mentioned.

November: In a post almost as self-indulgent as this one, I say hello to an old friend, and goodbye to his kick-ass Super Nintendo games.

December: I answered some of the questions in Shawn Elliott's reviews symposium. Man, it seems like that happened just yesterday.