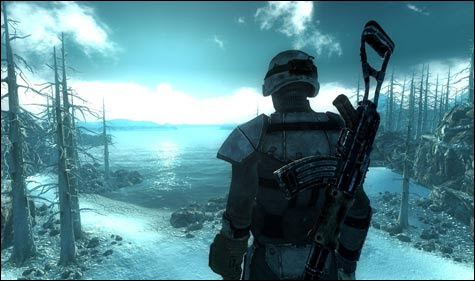 The worst part is something that was too convoluted to explain fully in the review. I think it'll only make sense if you've already beaten Fallout 3. My last manual save, with my level 20 character, was in Vault 87, or past the point of no return in the main storyline. I didn't think I could backtrack from there and take care of the Operation Anchorage quest. Instead, I loaded up my last save before that one, which was about 10 hours earlier. No real problem there, except that playing the expansion also overwrote my lone auto-save, which had been at the end of the game. If I ever want to experiment with the different choices the ending sequences offers, I'll have to re-play a bunch of stuff that won't be any different.

Not that I ever planned to do that. But still. It's the principle of the thing.

Like I said, if you're still on your first playthrough, or even starting a second or third playthrough, this expansion probably would be worth it, if just for the Winterized T-51b Power Armor. But since I'd already wrung everything I could out of the retail version, Operation Anchorage did not scratch my itch.
Posted by Mitch Krpata at 9:00 AM

I restarted Fallout 3 just to play Anchorage and loved it. Is it cost effective on a per-quest cost compared to the original campgain? No.

But it's very cool, with awesome visuals, great blowing snow, and some fun combat. Once that was overwith I continued the game and now I have a great Gauss rifle and Ninja camo to wear, which both work great and really add to the game.

I think it was well worth the $10 and it reinvigorated Fallout 3 for me. I had already played it about 100 hours (65 first playthrough and 40 on a second partial playthrough) and now another 45 on the current playthrough.

And I'm not done yet!

Mitch, not to belabor the point, but having read the actual review (or skimmed it -- sorry, I'm at work and haven't the time at the moment to read it all), I don't think you give Anchorage a fair shake.

I agree that most users will find little to like about the DLC. Most podcasts I've heard panned it completely. But plenty of people who put 100+ in Oblivion and are doing the same with FO3 will find it $10 well spent.

Sounds to me like we mostly agree on this. But you're right, I didn't consider people for whom multiple playthroughs are a priority. That's got to be a pretty small percentage of total players though, right?

More to the point: is there anyone who had already put 100+ hours into Fallout and hadn't yet made up their minds on Operation Anchorage before reading this review?

Mitch, I doubt it. I'll buy all the DLC and I bought all of Oblivions too.

The game it's very nice with a nice 3d graphics and sharpness which made it very real.
Thanks