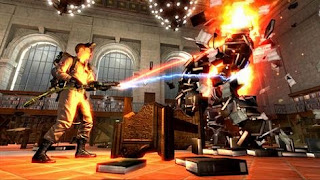 Above: You're right, Ray. No human being would stack books this way.
Ghostbusters is just about the perfect movie, and I suspect that anybody who grew up in the 1980s can't help but look forward to a video game adaptation that features the voices and likenesses of nearly all the main cast. But will Ghostbusters: The Video Game live up to the film's lofty standards, or should gamers keep their five bucks? Let's see what the commenters at Gamestop.com have to say.

I saw the first and second movie and it was great . I reserved it because of the game and the free T-shirt . I can't wait until it comes out . This wil be the best game I will ever have. I would definitely recomend this to a friend . OH YEAH !

I think he confused the Stay-Puft Marshmallow Man with the Kool-Aid Man.

MikeyJaymz lays it out for the haters:

Can't wait to get this game as soon as it is available. And for those who say it looks bad......who cares? It's Ghostbusters. I'd get it even if it was the worst game ever made.

RyanLec84, no fool, has waited to see what the reviews say before making up his mind.

...the game is getting fantastic reviews! OXM and IGN have already given it an 8/10...AKA "Impressive". NOT an easy feat!

(laughing so hard that I sprain something)

GamerGod198 puts together all the building blocks of a fantastic user-submitted preview. Let's break it down, section by section. First, enthusiasm:

I can't WAIT to play this game. I preordered it a few days ago and each day I have to wait is driving me mad.

Then, a grammatically confused description of the game's features:

You can destroy I would say everything, voiced by the actors and likeness of them is exact too !! plus it'll be fun to destroy the stay-puft and even vigo and gozer.

The shout-out to Gamestop and its business practices:

The shirt is worth it, to have a piece of history, something only preorderers get is cool.

The token point of concern:

The graphics look awesome and so does gameplay, worried about online and probably needing a headset, hope they might add DLC or something though.

And the "WTF" conclusion:

Lets just see how it is, at least if its not good, its better than the NES ghostbusters II or the last GB game of extreme GB on gameboy advance.

Whoo ho it's finally going to come out i'm so excited man. once i have the game i'm going 2 play non stop. in the preview u get to face of the state puff marshmallow. i can't wait, i wonder if u get cover in marshmallow when u defeat him.^_^ :p

I know you're excited, Geo, but that stuff you're covered in ain't marshmallow.

The only thing I could want from this game is to be asked if I'm a god, and to get to choose my answer.