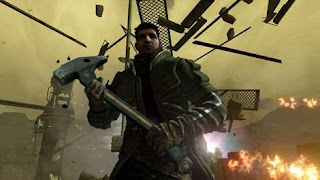 Above: Red Faction is smashing!
My review of Red Faction: Guerrilla is up now at thephoenix.com.

One thing I've said repeatedly is that I'd prefer a game to do one thing exceedingly well, rather than attempt a million things and not quite get there with any of them. All of Red Faction centers on knocking shit over. There are missions overlaid on that, and a storyline, and an economy system, and so on, but at its core this game would live or die by how much fun it is to demolish everything in sight. And it is so much fun.

The explosions are great. The feedback from the sledgehammer is great. The number of different ways you can take down buildings is great. I don't know how many times I sabotaged my own mission objectives because I couldn't resist stopping and trying to knock out a guard post, but I also don't care.

Even with that said, the design is still pretty smart. The biggest concern of the developers didn't seem to be to show off their considerable chops, but to focus on the player experience. And so you can fast travel, and sprint endlessly, and change the difficulty mid-stream. If your vehicle overturns, you can flip it back over as though it were weightless. One of my early complaints in the game was that my character couldn't climb onto ledges, but then I realized that I should be smashing through them.

Recently I discovered that this game was my go-to example for not one, but two different posts in which I critcized the culture of hype: once while ho-humming the announcements at GDC 2008, and once while bashing screenshot dumps that allege to be news.

I think this proves my point.* I had no expectations for Red Faction, and it was awesome. I learned this partly by word of mouth, and partly by taking a chance on the game. Not because I've spent a year and half street teaming for THQ. That's how it should be. Right?

*"This just proves my point" © Jonah Goldberg, idiotic political pundit.
Posted by Mitch Krpata at 9:00 AM

Your blog posts 'reviews' are always so much more thoughtful and interesting than the thephoenix.com reviews. Do your bosses there ever get mad at you for withholding the good stuff?

I actually don't think any of the editors read this blog. Whether that's good or bad, I don't know. That's an interesting comment though. Could be that I'm more self-conscious when writing for the paper. I'll try to keep it in mind going forward.

what amazes me is people buy total crap like prototype when an excellent game like this exists...

Prototype is so awesome that it broke my PlayStation!

Dude, I wasn't following the hype (though I did have the pleasure of playing the multiplayer beta preview last year) but the demo sold me on the game before release -- http://graffitigamer.com/?p=495.

The ability to destroy almost any target with any method is the best thing in the game. So many times I'll try to take out a headquarters with a stealthy approach and fail, only to get angry, steal a massive dump truck and plough completely through the side of the building. Then, jump out, lob as many mines as I can, run out of the building guns blazing, then blow that thing to high-hell.

Point in case, I was stuck on the level where you need to remove the microphones in Dust at the mining site. Then, I decided to steal a truck and drive through the building and out the other side. I got out and turned around to see the whole outpost come sliding down the hill behind me. The wreckage crushed me but damn was I satisfied!

Did you play on the Casual difficulty setting? I've seen a few articles that have said the casual setting is by far the best setting even for seasoned gamers because it allows the player to rely on the sledgehammer to take on many enemies at once rather than have to use awkward shooting controls. I'm curious how many people do this.

I tried it and it was a little better, although I still died kind of a lot. I'd almost prefer there were no enemies at all, really.