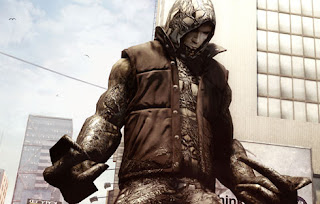 Above: Chris Benoit is really mad / Chris Benoit is really angry
My review of Prototype is up now at thephoenix.com. Maybe it should be "review," in quotes. I did sink a good deal of time into the game, but not nearly enough to feel I had a handle on it, before the PlayStation 3 melted down. Rather than try to conceal that fact, I figured I should make it clear from the start. Not an ideal situation, but honesty is the best policy and all. I can live with myself after writing this review.

It's too bad, though, because I was enjoying the hell out of the game, far more than I expected. It's impossible not to compare Prototype to inFamous, and it felt like the game I wished inFamous had been -- much faster and more ridiculous. There's just no comparison between the boring powers of Alex Cole and the ludicrous powers of Alex Mercer. And I much preferred the speedy platforming of Prototype to the static cling of inFamous, though it did have its own problems.

I hope to have a lot more to say about Prototype in the future. Far, far in the future, when I finally get my PS3 back.
Posted by Mitch Krpata at 9:00 AM

I haven't played either, but my friend Ross over at The Weekly Geek has suggested that inFamous is essentially a third-person shooter, but with the standard guns replaced with electricity, while Prototype is about actual superpowers. So while they can (and of course will) certainly be compared on the surface, they're really completely different games beyond that.

Completely true, and that was something that bugged me about inFamous as well. Prototype is more of a brawler, and in that respect it's also not that different from some in that genre (some of the powers reminded me of God of War).

Don't have a PS3 so I didn't try Infamous but I did try Prototype on the 360 and I thought it was horrid. Another one of those awful games that makes me question us as gamers and how base we are. I guess me walking around the wasteland enjoying the slaughter of zombies and other foes is no different, but there was something cheap and base about Prototype that really turned me off.