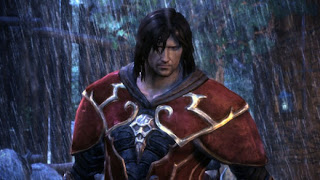 Above: Castlevania, now with 20% smaller heads.
In his farewell post for PopMatters, L.B. Jeffries said something that resonated with me: "In games, more than any other medium often the problem is just you."

Whenever I dislike a game, especially one that other people seem to like, that's how I feel -- that, far from being flawed itself, the game is illuminating inherent flaw in me. In theory, I like the idea of being the guy who goes against the grain, but when it actually happens, it's cause for a lot of sad-bastard navel-gazing on my part. I won't subject you to it here, except to say that my review of Castlevania: Lords of Shadow does have me questioning my own sanity.

I have been reading many positive tweets about this game from people I respect, and it has a healthy Metacritic score of 83. But there really wasn't one thing I liked about it. Rookie mistakes like putting checkpoints before cutscenes rankles (yes, you can skip the cutscenes, but it's a more cumbersome process than it needs to be). Constant and needless hints on the screen prove to be a distraction (how many times do I need to be told to "press RT to grip?" I got it). The platforming was bland. The combat had promise but lacked any visceral impact. Nobody else seems to be making this complaint, so maybe I'm just crazy, but I swear that half the time it didn't even look like my weapon was making contact when I did damage.

Sort of like with Metroid: Other M, a large part of how you approach this game depends on what your mental picture is of a Castlevania game. As a Symphony of the Night fan, I certainly would have preferred a new Castlevania that took more of that game's approach. If anything, a back-and-forth platformer that borrowed more from Prince of Persia than from Devil May Cry would have hit the spot for me. I enjoyed how overpowered Alucard was, and the fun of Symphony is in exploring. The castle is your enemy more so than its inhabitants. But that's not the game Konami wanted to make in 2010.

And that's okay. In a lot of ways, Lords of Shadow is more of a throwback to the original Castlevania, and to Super Castlevania IV, which I also loved. An action game is not a radical departure for this series. But, I don't know, Castlevania or not, this isn't one of the best action games around. This is a case where I feel like the scores actually do tell the story: I scored Lords of Shadow two points lower than God of War III and Devil May Cry 4, and scored both of those games two points lower than Bayonetta. That sounds right to me.

I am clinging to Ben Kuchera's review of LoS like a life raft. He makes many of the same points that I do, and many more that I didn't, but which are entirely correct. His article has hundreds of comments, most of the "no offense but you're an idiot" variety. The comments also open up the question, once again, of what a game review is supposed to be. That's another discussion, but the real takeaway, for me, is that some readers don't want writers to be honest with them. They want a pat on the head.
Posted by Mitch Krpata at 9:00 AM

I'm pretty offended people want pats on heads in the first place. I've had heated arguments over the merits or demerits of things, be they book, game film or TV, and what I hate hearing is "If you have nothing good to say, don't say anything since it might insult other people". This is as if my opinion about something they like insults them personally!

I don't mind disagreements, and absolutely want to know why someone else thinks X is the best thing since sliced bread (sometimes admittedly only to question it; or question why I didn't think that way), but saying "You can't say anything bad since it is your opinion la la la la la la" is rubbish, especially if it is an actual review published explicitly as a obvious opinion.

I absolutely want the raw deal, the niggling features, the bugs and crashes, the "It might only be me but" parts. These are what make a game go from playable to unplayable in a matter of minutes; or in fact might be the charm or if are not that bad, not detract from the gameplay but are still worth noting.

Admittedly, I'm afraid since I don't own many consoles many of your own reviews don't get enough use from me, but if you simply sing the songs of praise about something you're doing a great injustice to the word "review"; and I'm glad you're sticking up for yourself :)

"The comments also open up the question, once again, of what a game review is supposed to be."

A game review is supposed to be your impressions of a title, wrapped in the context of your gaming history.

Too often reviewers get obsessed with scores, but frankly scores on reviews are beside the point, and are a negative influence on the industry rather than anything helpful.

Tell me what a game made me think, how it made you feel, what you liked, and what you disliked and that's all the review I'll ever need.

Oddly enough, all of my early complaints with this game melted away by the 8 hour mark or so. Personally, I'd say the combat is second only to Bayonetta and DMC4, but miles ahead of GoW where you couldn't even break a combo to dodge. The light and dark magic did wonders too. I loved how the focus meter discouraged mashing.

It had some hiccups, sure, but overall the action, aesthetic and puzzles gradually evolved into what I wanted from a Castlevania game. Even if it takes its sweet time to get there...

Are you reviewing it, Jeffrey? Would love to read it.

That's another question: if it takes eight hours to get to where you no longer have any complaints, what does that really mean? A lot of people complained that FFXIII took way to long to pick up, but I enjoyed it the whole time. And I think of a game like Far Cry 2, where I did have to put a good 4-5 hours into before I really started to get it, but it kept my interest long enough for it to happen. Here, I dunno, I felt constantly put off.

Sadly, I'm not reviewing it anywhere. I just played this one for fun (and yes, I'll admit my bias that I spent $60 on it and thus really wanted to like it).

I may have overemphasized the slow burn. I actually did enjoy the first 8 hours, even if they weren't as good as I was expecting. It just felt like a GoW clone with a Castlevania aesthetic, which isn't bad per se, just not what I was looking for.

I'd argue that LoS follows the Liz Lemon school of dating by getting all the weird stuff out of the way first. Your head's too small, the camera isn't the best for exploration, and I too had the problem Ben had where I'd accidentally go the right way before I could collect my reward (though a "restart at checkpoint" option helps with that). None of these things get better, but I stopped wishing for the game it was, accepted these flaws, then noticed all the interesting things it does right.

I think pacing is one of its strong suits (after the slog that is chapter 2). I felt like I never had any idea where the game was going to take me. Bosses, puzzles and titans are not evenly paced, which I respected since it left a genuine sense of surprise when I got to them.

On that note, I even grew to like the segmented levels separated by a loading screen since it too left a sense of surprise when I'd boot up the next level to see what it was like. Both that and the prerendered camera grew on me and reminded me more of a 2D game in many ways where you're only able to explore what the designers intended.

If you hated the beginning as much as you and Ben seemed to then I'm not confident the rest would change your mind. You'd probably agree if gets better, but "better" might not be enough for you. Though if you found it at least somewhat enjoyable but simply uninspired, I think it's worth sticking with as it gradually builds its own identity.

Does anyone have the energy for a debate about what a videogame "review" is supposed to be about, anymore? The Sean Elliott symposium was meant to settle the issue once and for all but it kind of fizzled out mid-stride...