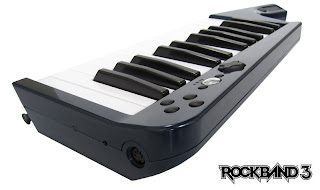 My review of Rock Band 3 is up at thephoenix.com. This is one where I gave the game a high score, and then spent all my column inches talking about my reservations. And I didn't even get to all of them!

For instance: Did you know that lots of songs that have keyboard parts only have a few seconds of keyboard parts? Terribly deflating for the solo pianist. You bust out a couple arpeggios for the introduction, and then wait, fingers primed, for your chance to knock 'em dead with a solo. And you wait... And you wait a little more...

Or this: Some of the tracks that come on the Rock Band 3 disc don't even include a keyboard part. If you needed further proof that the keyboard player is the most uncool person in the band, there you have it. The improved drop-in and drop-out capabilities help, but it's still disappointing when you want to play the new instrument only to find that your singer wants to play something that doesn't support it.

Or this: Even though all the DLC you've previously downloaded will work in Rock Band 3 (a definite improvement over Beatles), it does not include keyboard support, even for songs that are crying out for it. Really? You're telling me the Killers have "no part" for keys? I understand why it has to be this way, but that doesn't mean I have to like it. This Joystiq story seems to indicate that it will never be possible to upgrade most of these past tracks, and if it is, you'll have to pay for it.

In fact, as a huge Rock Band fan, I'm starting to feel gouged. By the game's count, I've already downloaded 88 songs, which at about two bucks a pop is almost $180. The keyboard bundle was $129 (and no, I didn't get a free copy). If I want the pro guitar, that'll be $150. The Squier that comes out next year is $280, and you need the $30 adaptor for it to work. The notion of Rock-Band-as-platform was one I supported, but I didn't realize it was meant literally. Rock Band now costs more than Kinect.

But here I am, seriously considering buying one or more of these extra things. The reason is simple: this game is awesome. I have played so many lousy games this year, especially those which were supposed to be great, that I've started to wonder if I even like games anymore. Rock Band 3 puts my fears to rest. It's fun by yourself, keyboard lulls notwithstanding, and it's fun with others. And it has the genre's single biggest advance since Guitar Hero invented it.*

Pro mode changes everything. While I still pump my fist at the end of a song when I'm on guitar, and while I still prefer drumming to anything else, the idea that I am playing real music on the keyboard tickles a completely different region of my brain. Within an hour of starting the pro keys tutorial, I was successfully playing scales without looking at my hands. How long would that have taken without the aid of the game?

Playing pro mode is an order of magnitude more difficult than playing regular keys, and at this point I am still muddling through on easy or medium difficulty. I'm reminded of my difficulty learning to drum, but playing the keyboard is much more complex. The biggest obstacle isn't following the note chart onscreen, it's finding the correct key. If you're one of those people who think games aren't challenging enough anymore, here's the one for you.

*Let's not get pedantic here, people. You know what I mean.
Posted by Mitch Krpata at 9:00 AM

"I have played so many lousy games this year, especially those which were supposed to be great, that I've started to wonder if I even like games anymore. Rock Band 3 puts my fears to rest."

Loved that quote. This year I've been feeling the same exact way. After playing Super Meat Boy and some moments playing some of the Borderlands DLC I still get that good gaming feeling.

I am deeply ambivalent about the RB3 keyboard. On the one hand, regular Keys is great fun in the classic Rock Band mold, and the controller is great. On the other hand, Pro Keys is actively painful to play for those of us with prior experience, and the song support is anemic at best, and pressing a Star Power button with your left hand is the opposite of immersive.

Now, if they gave me sideways sheet music, we'd really be talking - both as an educational tool and as a better game.

For me Rock Band 3 builds on the game franchise i already love. For me though not picking up the pro guitar just sticking it out with my classic rock band 1 guitar where the overdrive tilting does not work anymore. The song list is amazing for this game though and that is way harmonix has been able to stay so far ahead of guitar hero.

I love the post, keep up the good work hope to hear more from you in the coming future!