How hard can it be to make a board game? 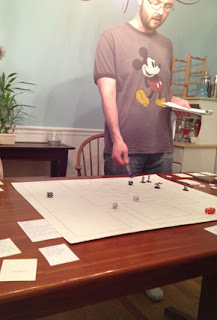 Above: Pilot testing Honor Among Thieves.

Like Quintin Smith, recently I've found myself increasingly drawn to board games. It all started about a year ago, at PAX East, actually, when a friend of mine bought a copy of Arkham Horror. He'd heard great things! We barely knew of its reputation as the most complicated board game in existence.

Shortly thereafter, we found a time to get several people together and give it a go. Our first game took eight hours. We won, somehow. In the year since, we've played a few more times, understanding a little more each time. We still don't fully grasp it, I don't think. We joke that we'll know we get Arkham Horror when we finally lose a game.

Despite how cumbersome and complex Arkham is, I get something from it that I don't get from video games. I'm not even sure what that thing is. There's the communal aspect, for sure. And how purely the game focuses on mechanics, giving us a framework to fill in our own stories, free of cutscenes and tropes that I've long since grown tired of. But there's something else, something almost indefinable, what Robert Florence calls "the way the game lifts off the table and fills the room."

In an eight-hour session of Arkham (more recently whittled down to about four hours, as we've gotten more comfortable with it), I have a sense of total focus and involvement. My brain juggles dozens of pieces of information, plucking each bit out of the air as its needed. Since the game is cooperative, even during the long stretches where your character isn't doing anything directly, you're still involved. It is a wonderful experience.

Arkham Horror was my gateway drug. Since then, I've played and enjoyed Mansions of Madness, with its innovative approach to storytelling and cooperative mechanics; The Resistance, a card game about distrust and deceit; Dominion, the game where the most useless items you acquire are the most important ones for victory; Battleship Galaxies, a welcome update to the classic that brings honest-to-god strategy to the table; and much more. And I've read as much as I've played, about Battlestar Galactica's Cylon traitors, King of Tokyo's dice-rolling hijinks, and Space Alert's time-sensitive zaniness. Board game designers seemed to be doing so many fascinating things.

After all this, it wasn't surprising when a little voice in my head piped up and said: "I want to do that, too."

The idea came to me, as most of my ideas do, when I was at the gym, where my only hope for sanity is to concentrate on something besides my workout or pray for a power outage. Pedaling furiously on the elliptical, I was thinking about everything I had responded so well to in the games I'd played. I loved the cooperation of Arkham Horror. The exploration and the traps of Mansions of Madness. The duplicity of The Resistance. And I started to think... what could I do to combine all of these things?

What if I could make a game that required you to cooperate with the other players to have any prayer of winning, but with the ever-present danger that they could stab you in the back? What if the setting weren't your standard sci-fi or horror world, but something closer to reality? What if I could pull all of these disparate elements together with humor and a true sense of narrative progression?

I don't know if I can do any of these things, but I can certainly try. And so I have been working on a board game I'm calling Honor Among Thieves, the game of cooperative backstabbing.

So far, the answer to the question that sits atop this post is: making a board game is hard, but not as hard as I thought. I've been making progress. Tomorrow, I'll share some of the details.
Posted by Mitch Krpata at 9:00 AM

It's kind of funny how your board game progression almost completely mirrors mine, and nearly at the time, too. Only real difference is i started with King of Tokyo and have never played Arkham Horror. I've been working at trying to get my wife interested in board games, as well, so that has affected the choices i've made.

Looking forward to hearing about your game.