Two sides to every review 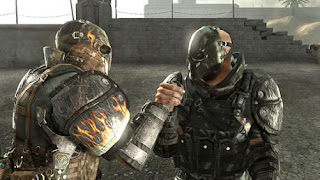 Via GameSetWatch, I read an interesting thread on NeoGAF about Gamespot's Army of Two review. (Is that enough links in one sentence for you?) The complaint is that the reviewer, Joe Dodson, centered his critique on the game's storyline and themes, and therefore failed to do his job. Worse, the original poster seems to feel that such considerations have no place in game reviews. As somebody who tries to base most of his reviews on issues of story and theme, I frankly found this troubling.

So I was heartened to read both the review in question, and many of the dissenting replies in the thread. I have a couple of possibly unfair prejudices in mind about Gamespot and NeoGAF. The former has often seemed dry and snooty to me, and the latter has seemed like the Internet's petri dish. Gamespot's review says, basically, that Army of Two is a fun game with some troubling overtones. (In fact, the bulk of the review deals with gameplay issues, and not the storyline.) I haven't played the game too much yet, but from my experience so far, Gamespot's take seems about right.

This is the first game I'm aware of that explicitly name-checks 9/11, to the point where an early cinematic shows a character waking up to see an image of the Twin Towers burning on his television. How do you see that and still say this is just a game? How do you play the rest of the game -- which is about Blackwater-esque mercenaries fighting in such fantastic locales as Afghanistan and Iraq -- without constantly drawing parallels to the real world? I'd suggest that if you can play this game without once considering the issues it raises, maybe you really are desensitized.

To be clear: I'm not saying any of this is out-of-bounds for a game. In fact, I think it took some serious stones for Army of Two's developers to go this route, and for EA to publish it. This is the world we live in, and I'm glad to see a game embrace that. The only problem I'm having so far is that, even in the short time I've played it, the undertones keep shifting under my feet. It seems thematically confused. On one hand, it's goofball satire, with braindead and vaguely homoerotic interplay between the two leads, and hyperbolic portrayals of suicide bombers who run toward you shrieking and waving their hands above their heads. On the other, it trends toward distressing realism when talking about the uneasy balance between the military and unaccountable private contractors. It's possible this all gets tied together in a cohesive way before it's all said and done, so I don't want to go too far with it just yet. I only want to emphasize that the angle Gamespot took in reviewing Army of Two is a legitimate one.

And I'm glad that so many of the commenters on NeoGAF seem to agree. A significant number of them don't, and think that reviews should stick to the basic issues of graphics, play control, and so on. That, too, is defensible. But it's less interesting to me than more critical game reviews, and most people seem to agree that critical game reviews are what we currently lack. This comment summed up the dischord in the thread:

The videogame media are a bunch of parochial idiots for just mechanically praising games on graphics, sound, sex, and violence in reviews, instead of being more mature and evaluating games as an entertainment medium with storytelling, characterization, and a cultural context.

The videogame media are also idiots for evaluating games as an entertainment medium with storytelling, characterization, and a cultural context instead of just telling me how the graphics are and whether the game is worth playing.

Well put, but let's not forget that there's room for both kinds of reviews. It may be fair to criticize Gamespot for publishing this particular Army of Two review when they've made their bones by catering to hardcore gamers with a more straight-ahead editorial style. I happen to think someone could write an interesting and enlightening review of the game without spending more than a token passage or two talking about the gameplay. A game that explicitly raises topical issues absolutely deserves to be dealt with on that level, if not by every reviewer.

What is Army of Two trying to say? Does it succeed in saying it? These are the kinds of questions we ask without hesitation of books, movies, and music. I've said it before, and I'll say it again now: If we want the broader public to treat games with the respect we think they deserve, then it's our responsibility to set the example. That means answering these kinds of questions first, before people like Jack Thompson try to answer them for us.

If a game has a storyline that's worth anything, it's going to produce some kind of response. That's a good thing! Why would you review a game and not talk about it? I think the conflict around it is reasonable though. After all, just like cinema, if the movie/game is making a political statement, it's going to elicit different responses about the political subject matter. If you're one of the people who disagrees with the statement it's making, is it possible for you to still enjoy it? Does that kind of define the whole issue here?

I think that pretty much gets at it, although there's probably no clear resolution when you frame the question that way. Some people can engage with a political subtext they disagree with, and some can't. I don't think either side is right or wrong.

I notice, too, that people only complain about political content in reviews when they disagree with the politics.