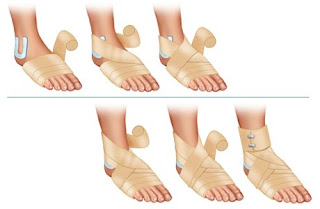 If you've been keeping abreast of my Twitter (that sounds filthy!), you'll know I had a slight incident over the weekend involving my ankle, a game of ultimate frisbee, and a strategically placed hole in a field. I was leaping to cover somebody on the opposing team and landed in a ditch. My right ankle made two distinct popping noises that were audible at least twenty feet away, and promptly swelled up like a balloon. I spent the rest of the day with my foot propped up, applying ice periodically. The swelling's gone down a bit, although the bruising would likely make you gag.

But it's not all bad. I took the day off, and as a result finally had time to polish off Crisis Core. As usual with these games, the final boss battle was a little disappointing. I don't like my games too difficult, but it seems like if you spend even the slightest bit of time leveling up, the last boss comes off as a chump. Still, the actual fight wasn't the true conclusion of the game -- it was followed in short order by a heartbreaking playable sequence that I was hoping would never come. Made me want to play Final Fantasy VII again right away.

But for real now, Squeenix, what's the score on FFXIII? Kick-ass portable games are all well and good, but my hopes have been fully re-energized for a full-blown PlayStation 3 version. Maybe my ankle will even have healed by the time it's out.
Posted by Mitch Krpata at 2:13 PM

That sucks. I had a similar injury about a year ago. I was playing basketball, and while grabbing a rebound, I came down on the back of a guys calf. Tore three tendons in my foot. I couldn't really do anything beyond hobbling for weeks. I got clear through Xenogears because of that injury.

If you've got at least a grade II sprain, the bruising you've got right now is nothing. wait a few weeks, it won't hurt, but they'll turn all the colors of the rainbow. I swear, parts of my foot turned orange.

I hurt my ankle one time. It was bad.

Now that's done for, injuries that inhibit movement are the worst, especially when it comes time to take a leak.

I ended up lying on my back for two weeks in hospital jacked to the most painful antibiotic IV after I dropped a 5 kilogram weight on my little toe, crushing it, and ending up with a severe infection up to my knee.

The gear they hooked me on was corrosive to the veins, which meant not only did my leg pound but I also finished with massive internal scaring through both my arms.

Although, my PSP paid for itself in that time. I ended up playing WipEout Pure for more than 60 hours in that period, which might explain why I ain't so bad at it!

Good luck with your recovery! If I can find photos of my leg from back when, we can compare!

great work with the blog, easy to see why you made the blogs of note..keep up the good work

Isn't FFXIII supposed to be a lot like an action/adventure game but mixed in with the RPG elements of previous FF titles? The main character is called Lightning (or Storm, I forget) and the main place is a floating city in the sky apparently. More flashy and gun-based as well supposedly. Apart from this I know little. Hope your ankle recovers.
Ciao