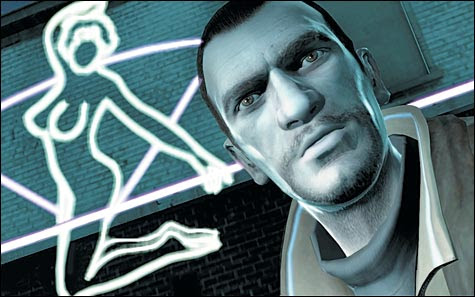 The story I've been alluding to for over a week now has been posted at thephoenix.com: "Sex, violence and video games." In it, I look at the merits of a few recent controversies, including the ever-present Grand Theft Auto criticism, the Mass Effect "SeXbox" flap, and, of course, the Resident Evil 5 trailer. I also take the community to task for often acting as their own worst enemies. The crux of the argument is that gamers need to be repping themselves better in the discourse, making a real effort at empathy:

The less-helpful commenters accused [critics themselves] of racism, of creating a racial divide where previously there was none. They decried an assault on Capcom’s right to free speech. But the question wasn’t whether the game’s Japanese developers had intended any racism (cultural ignorance is a commonly invoked defense among gamers), or why nobody had complained before when Resident Evil zombies had been predominantly white. It was whether those claiming free speech in defense of divisive games were willing to extend the same rights to those whom the games offended.

I also made one more attempt at demolishing the "just a game" defense.

To spend the bulk of your time and money on a hobby that can be dismissed with a wave of the hand would require an act of cognitive dissonance. Some games do have the potential to be transformative experiences. Talk to Final Fantasy VII fans about the grief they felt when Sephiroth killed Aeris. Ask a few BioShock players whether they saved or harvested the Little Sisters, and why. Such indelible moments may be rare, but they give game developers something to strive for. And they give gamers hope that the next game we play will also engage us intellectually, emotionally, and morally. I can think of no more belittling way to discuss this medium than to ever call something "just" a game. So let’s scrap that argument.

Think it'll take? Me neither.

When I began this piece, I had intended to lay the hammer down. This was to be the last word on the subject, and the spark that ignited countless fanboy epiphanies around the world. But that's not how it ended up. It is, perhaps, a good place to start, presuming that angry mobs don't do their best to prove my point. I would love to know what people think.

P.S. It's the cover story in this week's print issue, which is exciting. Pick up a copy, if you're local.

P.P.S. Also check out the brief sidebar, "Not-so-great moments in video game controversy." Nothing new or particularly illuminating, but that stuff's always good for a laugh.

I'll be interested to see if there's any kind of response from the more general-interest audience that tends to read the Phoenix. Hard to say.

I'm glad this will be on the cover, I think this is exactly the kind of article that non-gamers need to read.

Does the Phoenix have any kind of feedback mechanism for the print version? Letters to the editor and whatnot?

Huh. I didn't even know there was a Resident Evil 5 trailer until I read this blog.

I just wanted to chime in also and say that this is a great, intelligent, well-written article. Particularly nice work on the RE5 trailer, covering both sides of the issue while not ignoring the rather large number of willfully ignorant gamers. Good job.

The article is good...you present your argument well, the writing is good, and I think it will stimulate a lot of response. I think you make some very valid points that should have been brought forth earlier…good job.

well presented. I think there is one thing breezed over though... If the events in these games etc were on display on billboards etc, where the public has no choice in viewing them, then some of the ethics and content would most certainly be unsuitable, but since no-one is being forced to watch/play these games, infact choose to fork out sometimes up to £50 for them, one coulld argue that it is their decision to play/watch. There are ratings and warnings on the packaging, every single game produced has reviews on multiple websites, all easily viewed and understood, and if you are offended by the content, you can put the controller down and walk away.

Some games are more explicit, more outragous and often more questionable than others, but if you don't like that, then dont buy it, and don't play it.

And don't try to make the same decision for others. let them make their own minds up.

That was a good summary of the most recent controversies surrounding the gaming community but, as someone whose read nearly every ounce of debate and witnessed the forum outcries for all of the issues covered, I kind of wished it WAS the be all and end all, hammer down, final say.

However, the more well-written discussion of these issues exposed to the non-gaming audience, the better.

There was a shocking "fluff-piece" written for our local newspaper that appeared yesterday touting that in GTA IV you can "buy crack cocaine", amongst other falacies, and included only a one-sided hate-statement from a local families group. Three columns dedicated to hating GTA IV before release (a game in which you do not buy cocaine and where the main character, while surrounding by drugs and friends with dealers, always refuses to sample), seemed a little biased to me ... or maybe they were just trying to balance the double spread, as the other side of the paper had a full page advertisement for GTA IV.

Hey, this is the first time I've seen this blog, and it's amazing. You're addressing really important issues, in almost every post, and often they're issues that don't get talked about enough. Good job, I'll definitely be checking back in here regularly.

That was a great article. Its probably not worth pointing out, but N'Gai isn't "African American". His family is from Haiti, and I'm pretty sure he was born in Canadia. I think we know what you mean though ;)

Great article, Mitch, and congrats on the cover. I'm very happy you chose to write a reasoned, thoughtful essay when the "bring the hammer down" demon was surely sitting on your shoulder whispering in your ear.

A bit Pollyanna maybe, but I believe if we continue to model intelligent discourse and articulate analysis of video games, eventually our culture will embrace the medium without smirking. Articles like yours take us a step closer to that eventuality. I hope.

Jerane, I thought that might be the case! It occurred to me only too late to double-check. Would have been worth getting it right, certainly. My apologies to N'Gai.

Daniel, that's disappointing to hear. There are so many legitimate things people could complain about, they could at least bother to take a look at what they're criticizing first. They get paid for this!

Michael, I think you're right. Leading by example is probably the best way to go.

Great article.
The other day, I was in the car with my friends younger brother, he was about 8. He just played GTA and was screaming homies and n-word[I just feel ickyy typing it, even] and was all BAMBAM IM GUNNA SHOOT YOU. I took the liberty to accidentally break his game. He cried, and his grandma paid me five dolalrs for it.
But i dont think theres anything wrong with games and them saying things, games are just little alternate realities. A source of entertainment. You just have to try and keep it away from certain audiences.