Invitation to a beheading 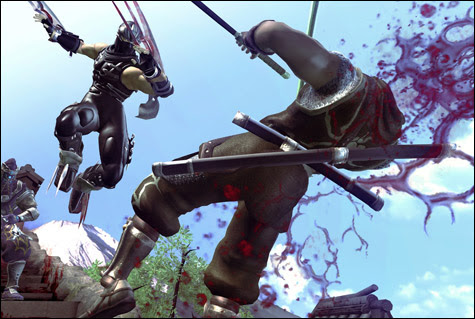 Well, my Ninja Gaiden II review is up now at thephoenix.com. I hold the original in high regard, but that might be because I was able to simply stop playing once it got too difficult. That wasn't the case here. But I also didn't notice quite so many glaring problems with the game camera in the original, possibly because I never got past the second boss. In the sequel, the capricious camera had me tearing my hair out at points.

What's either the best or worst part about Ninja Gaiden II, depending on your point of view, is how much of a throwback it seems like. If not for the fancypants visuals, you might think you'd stepped through a wormhole and were playing a 16-bit sidescroller. It's just hordes of enemies strewn along a linear path, culminating at the end of each level with a brutal boss battle. There's no more sophistication than that, and I think for a lot of people that's the game's biggest selling point. I might have appreciated it more, too, if I hadn't been so busy trying to avoid another control pad stress test.
Posted by Mitch Krpata at 4:10 PM

I'm reviewing NGII as well and hate the game with utmost passion.

At the moment, I'm unable to pass the train boss that slithers through the underground tunnels. It's rather frustrating because it's just frustrating.

I don't know if it's because I lack the skill (though I can complete regular fights without getting hit) or because it's such a poorly designed boss.

Worse, I don't know why I'm fighting it. Rah! Boss Battle! Rah! And worse yet, the camera does completely suck, as you've already mentioned.

I'm so, so very tempted to simply write a highly negative and opinionated review of the game up to the third level but I don't think that reflects highly of my integrity. Haha. Though I noticed you didn't complete it either. How far did you get through? If I may ask.

Needless to say, I'm heading back to DMC4 where the battles, to me, make more sense and the boss characters play at least a bit part in the progression of the story.

God, I don't think I made it any further than you did. It was about as sub-optimal a reviewing experience as you can get. Not only did I get the game with a two-day turnaround time before the review was due, but my 360 kept freezing (which Jeff Gerstmann leads me to believe might have been the game's fault), and then my fiancee's grandmother died. Plus there was the whole "sucking at it" thing.

So, no, didn't make it too far. Don't tell anyone.

Sounds like you've had a rough time. Sorry to hear it and please, pass my condolences onto your fiance.

Regarding NGII, I'm going to force on through, if I can, to at least pick up the Scythe. I hear it's ridiculously overpowered, and therefore perfect for a n00b such as myself. However, I'm not likely to enjoy the experience of getting there.

Hope you find yourself under better circumstances for your next review.

I don't know if you guys passed the big metal worm in the train tunnel yet, but here are some tips.

Stock up on ki, and make sure you use them A)when the creature sends those little screaming things at you and B)when he's hovering right over you.

For the most part, you just have to keep shooting him in the head with the arrows. Make sure you're within reach when his power gets low, because he'll then fall to the ground, at which point you can melee him to death.

I also think this game sucks. Not only did I get tired of the monotonous button mashing quickly, but the difficulty in some parts is just stupid. Not to mention that the camera is terrible. I'm going back to "Mass Effect".

Thanks for the tips Clandestine!

Still haven't passed that bloody tunnel monster yet but I'll give it another crack tonight with a stock of Ki.

I knew the arrows bit but I was wondering how in the hell you're supposed to dodge the flying head things. You can't seem to dodge them at all, so the Ki trick should help.

Will report back when victorious!

I actually finished Mass Effect quite some time ago on 360. It was good, though flawed. If I had a decent PC, I'd probably go back to it, actually but I can't see a point returning to the 360 version.

Well, after using the advice regarding when to use the Ki, that boss battle took less than a single round.

Now I see how simple it was, it makes me detest it even more.