Why does everybody in Metal Gear Solid talk like that? 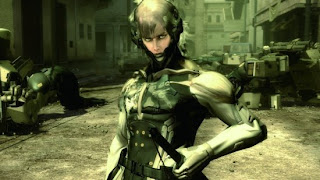 Above: "Funny you should mention the war economy; I was just drafting a ten-minute speech about it."
Tycho from Penny Arcade has an unorthodox opinion about the cutscenes in Metal Gear Solid 4:

I actually like the story of Metal Gear, but it's not told well. I don't care if a cutscene is long provided that it's well paced, but these cutscenes aren't simply long, they're eternal - and they feel even longer than they are because they're pure overreach. The script is insipid, didactic, and its insights are trite. The humor doesn't work, period, and it works even less against the backdrop of perpetual war.

Usually, when people talk about the cutscenes in the Metal Gear Solid series, it's only to argue for or against their length, and the quality of their integration with the gameplay. Most people seem to agree that the cutscenes, taken at face value, are done well.

And in Metal Gear Solid 4, from a production standpoint, they're better than they've ever been. Graphically, there seems to be little separating cinematic cutscenes and in-game, player-controlled actions. With no loading time between them, Kojima's team has achieved a seamlessness that has eluded past MGS games. (I should mention here that I've only just finished Act 1, so these are just my impressions so far.)

It's not just the technical side. Artistically, maybe only SquareSoft can compete with Kojima on the cinematic level. I agree with Michael Abbott: "...[Kojima] is a fine and gifted filmmaker. One can easily track his maturation from the original MGS. Unlike other so-called cinematic games like Mass Effect, the filmmaking in MGS4 is visually creative, high-caliber stuff." Kojima uses depth of field and simulated handheld cameras, among other tools, to showcase an aesthetic sensibility that outstrips that of many Hollywood directors.

As a writer, Kojima is less successful. The MGS series has drawn praise for its story, not least because after four games, it's clear that we're dealing with a science-fiction saga as epic in scope as anything comparable in literature or film. These games have real ideas about human conflict, about free will and fate, and now about the intersection of warfare and commerce. That they are not terribly penetrating insights almost seems not to matter -- we're just glad to see a game that takes a point of view at all (compare MGS4's take to the rigidly moralistic viewpoint of Call of Duty 4).

No one ever lived in Kojima's universe who wasn't waiting for an opportunity to wax rhapsodic about the deepest philosophical questions to anybody willing to listen -- or even to those, like Tycho, who aren't. Characters make their points, and then they keep talking. No one is reluctant to bare his soul. Everyone speaks in paragraph form. People in Metal Gear Solid don't have conversations; they trade soliloquies. The cutscenes are so long because nobody ever shuts up.

This post probably gives the impression that I'm not a fan of the game, and so far nothing could be further from the truth. I'm all the way in, to the point where I've been spending my non-playing time counting the minutes until I could get back to it. But Tycho's comment rang me like a bell, because I do think he's right, and I think in some ways Metal Gear Solid 4, like Grand Theft Auto IV before it, has provided another excuse for the community to anoint a savior. MGS4 ain't it.

In fact, I'd be willing to bet this game would be one of the worst things you could show to a Roger Ebert type in a bid to gain respectability. It focuses so much on the virtual performances that someone with no prior investment in the characters would be unable to look past the clunkiness of the storytelling. For us as players, it's easy to see why we're absorbed: We have a stake in Solid Snake's fate, which makes the game's long sequences of passivity acceptable.

Would the same be true of someone who wasn't playing? I doubt it.

I haven't played Metal Gear Soild 4 yet, I don't own a PS3 and I don't know anyone personally who does (although I considered getting one myself). I am familiar with the long cut scenes that you speak of though.

I don't know, I've always enjoyed the Metal Gear Solid stories. They've gotten a bit confusing sometimes, but the cutscenes entertain me regardless. I also know what you mean, with the characters just baring their souls to whoever they come across. I always just thought that was the world they lived in, moralizing and stating the points of war they took pride in prior to killing. It has gotten ridiculous, like the woman from MGS 1 who fell "in love" with her victims before killing them (oh please), but it's still entertained me.

I didn't play MGS 3 out, because that game was ridiculous difficult for me to get into. Gameplay wise, but I hope to one day get my hands on 4.

Now, let me search for your review on Mass Effect, about which I'm not understanding what you have problems with.

I know exactly where you're coming from. I haven't played MGS 4 yet, but I have played the other games in the MGS series at least twice each.

"Characters make their points, and then they keep talking."

That's how I've always felt. That kind of over-exposition is looked down upon in literature and is unheard of in movies, so yes, a Roger Ebert type would despise Metal Gear Solid.

Of course, it goes without saying that the MGS series isn't for everyone. If you're the type of person who savors cutscenes as a sort of reward for progressing further in a game, then chances are you'll dig the series. I'm that type of person, and even for me MGS 2 was overkill, but 1 and 3 were fine.