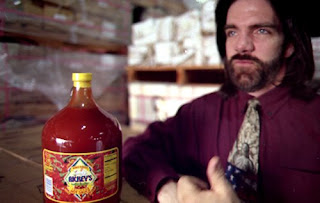 Above: Windforce Izumo unmasked?
Finally! This makes my armchair analysis of the Geometry Wars high scores much easier.

A week ago, I looked at the top scores in Pacifism to try to get an idea of how they were distributed. Today, using the current Pacifism high scores, I'm interested in how much they might have changed in a week. Surprisingly, they haven't changed much.

Our number 2 guy, Leaping, has the same score he did before. But in the interim, he's dropped to 4th place.

The 5th-ranked player last week, Evil Mask, hasn't topped his best score yet either. The difference is that he's now 10th. And the guy who was 10th last week, Tyrak Stinger? Now he's 25th.

What's happening here? It's similar in principle to the inequity we saw with the total distribution of scores. There seems to be more churn in the rankings the closer you get to the middle, but your relative ranking matters less. Dropping from 5th to 10th seems like a catastrophic decline, particularly as Evil Mask is now staring up at Windforce Izumo from a distance of over 660 million points. On the other hand, jumping hundreds or even thousands of spots in the line may be a matter of a few thousand points.

For myself, last week I was ranked 15,236th. I blew away my high score, and as of this writing I'm ranked 2,591st, with a high score of 124,994,600. That's a big jump. But since I reached that personal high water mark, I've been steadily sliding back down the rankings. At first, my score was good for around 1,800th place. I've dropped over 700 spots without doing anything. There is this entire mushy middle ground on the leaderboards where success is even more relative than usual.

I wonder if anyone else is having the same problem I am: I've stopped improving. For the first week or so, every session brought higher and higher scores. At some point, I hit a wall. The game no longer seems as fun when I feel like I should be posting better results with the same frequency I was before. Which is a shame, but it's the nature of the beast. Somebody needs to provide a platform for Windforce Izumo to stand on.

*Last week, I referred to this user as "Windforce Azumo." I could have sworn that was what it said when I checked through Xbox Live, but at the time I was switching inputs on my monitor between the Xbox 360 and my PC in order to write the post. My apologies to him!
Posted by Mitch Krpata at 7:00 AM

I remember reading an article, somewhere back when the original Geometry Wars was released, written by a guy who was trying desperately to break 1,000,000 points. He just couldn't do it. With friends at his side, they tried many different tactics to see which could be used in the long term. Nothing worked.

When they had given up trying themselves, they found a video of one of the top scorers and followed his tactics closely. They blew away their previous record.

So, that's what I'd suggest if you'd like to improve. Track down some YouTube vids for Geometry Wars 2 as they go live and compare your tactics to those of the top players. Study and you shall learn!

To answer the above comment, chances are the videos watched were from K4rn4ge who is very well known in the Geometry Wars community. He was on top of the original Retro Evolved leaderboards for quite some time and currently stands 4th now and yes, he is also quite high in the various Geo Wars 2 leaderboards as well although I don't think he has reached his potential scoring range just yet.

That said, as a Geometry Wars fan it is great to see that there are a whole bunch of different people setting scores across the various modes. Sure there are some known names up there as I mentioned before, but there are also a lot more new(er) ones and that's a good thing for the overall community.

On a more personal level and to answer your post Mitch, I too can't seem to improve at the moment. In the original Retro Evolved, I was/am on top of my friends leaderboard with a score over 2 million. One look at the leaderboards for the modes in Geo Wars 2 and quite a lot of my friends are higher than me. When I first saw this, I kind of laughed it off and thought to myself that I would pass them (significantly...) once I played it some more but a week or so on and this still hasn't happened. This in turn is making me question as to whether they are better than me this time around, or indeed I am just at a point (like you claim to be) where I am just not improving for whatever reason. I still expect to best them eventually, especially given the rather large gap between me and the rest of my friends in the original game, but at the moment it just isn't happening.

Anyway I haven't been online all that much in the past fortnight so a belated congratulations on the milestone and also thanks for posting not only about Geometry Wars, but showing the interest in the leaderboards and also comparing it to Guitar Hero.

I think anybody hits a plateau with these things. There's the initial learning phase when you just keep improving, and then it flattens out for awhile -- that's when you need to really grind it out until you start getting better again. Sadly, I did not have the patience to do that.

Agreed, but as I played the hell out of Retro Evolved I sort of feel as if that was practise enough. I mean sure they are different games and there are subtle differences, but I still felt like I should be on top, or thereabouts going into the sequel.

I seem to be back on track with my scores though as I managed to get the highest score on my friends list for both the Evolved and Sequence modes today. Now to work on the other modes.

Hello everyone! Who knows where to upload the film Avatar?
I even bought the film Avatar for a SMS to http://rsskino.ru/kinofilm/avatar.html , the link was, but download fails, the system will boot quite strange cocoa something.
Men, advise where to normal as quickly download film avatar?