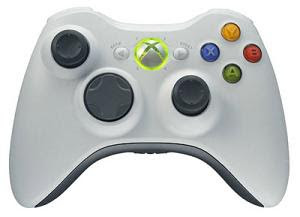 Ryan downloaded Bionic Commando Rearmed and seemed to enjoy it, although he had a complaint about the button mapping. On the Xbox 360 control pad, you press the B button to grapple and the A button to fire your weapon. Something about that seems off. For the sake of ergonomics and usefulness, you'd think playing with the A and X buttons would make more sense. Look at the picture of the control pad atop this post and tell me that wouldn't fit the human thumb better.**

A similar phenomenon has afflicted an awful lot of 8-bit remakes, for reasons I don't understand. They can't -- or won't -- properly replicate the NES experience. A few years ago, I was playing the Mega Man Anniversary Collection for the GameCube, where the developers had swapped the functions of the two buttons. They mapped firing to the A button, and jumping to the B button. This is exactly backwards.

When I remember about playing those simpler NES platformers is that all of them worked the same way. You hammered your knuckle on the rightmost button to jump, and fired your weapon with the tip of your thumb. This was an ideal arrangement. The leverage of your thumb allowed rapid-fire button presses for the main action without sacrificing the more deliberate pace of most jumping mechanics.

Why do so many remakes reverse the button positions? Partly, I think it's a rudimentary mistake: on the original NES pad, the B button was on the left and the A button was on the right. On the Xbox 360 pad, the A button is on the bottom, and the B button is on the right. Keeping the same button assignments results in a reversal of their positions.

This is a bigger deal than it might seem like, and not just because it made such an awkward experience out of Mega Man 2, which I was playing for an audience. It comes down to user experience and expectation. There is a temptation among tech people sometimes to blame their users when the users have trouble with a product. Although this is sometimes true, most of the time it's because the designers didn't do their homework with regards to usability.

The Web usability expert Jakob Nielsen likes to say that website designers ought to do the same thing as 90% of their competitors, because that's what users have come to expect. They have learned to navigate web pages in a certain way. It's the same with games. An Xbox 360 user playing a platformer will expect the A button to make his character jump. If you're going to deviate from the norm, you'd better have a damn good reason.

This isn't to suggest that progress isn't desirable. When a change in control is worthwhile, then it's going to happen. Ten years ago, any racing game you played assigned the gas pedal to one button and the brake pedal to another (mapped to a modern day 360 pad, you'd probably go with A and stop with X). Today, these functions are assigned to the analog triggers in nearly every game, because that's a better way to do it.* User expectation has kept pace. Nobody picked up Burnout Paradise and pressed the A button to accelerate.

Too Human shows some of the pitfalls of going your own way. Users expect to be able to manipulate the game camera in a 3D platformer by using the right analog stick. But Silicon Knights had a different approach in mind for their dungeon crawler, and instead assigned the right stick to melee attacks. It's an interesting choice. I don't want to knock it simply because I wasn't used to it. In fact, it wasn't even that hard to get used to, and works pretty well in some ways.

The question is: Is what the developers gave up with this new approach equal to what they gained? I'd have to say no, and not just because poor game cameras are one of my top 3 videogame pet peeves. While the melee action does what it's supposed to, using firearms is practically impossible. Cycling between enemies doesn't work too well, especially when the boss you're trying to shoot at is standing behind grunts. That's a pretty big part of the combat.

Standards become standards for a reason. Nothing is beyond revisiting, of course, but it's not helpful for 90% designers to eschew decades of user expectation because they think they've found a marginal improvement. Maybe Too Human wouldn't have been the same game if it copied the control scheme from God of War, say, and had you press the X button to attack and use the right analog stick to dodge. But one of those games relied much more on the user's built-in expectations -- maybe it's only coincidental that it was the much better game.

*Another excellent example is EA's Skate. They took a completely different approach to videogame skateboarding than did the Tony Hawk series, and it was a stroke of genius.

**John Barleycorn points out in comments that you can remap Bionic Commando's buttons, if you want to. This is always the best solution. Even so, the default configuration ought to be the most familiar one.
Posted by Mitch Krpata at 10:42 AM

So aside from bad game cameras, what are your other two top pet peeves?

Overlong cinematic intros, and checkpoints/save points that are too far apart.

After playing Too Human, I think I have a fourth: Unskippable, 15-second-long death sequences.

Can I add "unnecessarily cumbersome menu systems" to the pile? You have all these action/RPGs now where you need to take a break from the blistering action every 3 minutes to fiddle with the menus.

I've only been playing Too Human for about 2 hours now but despite these problems it's kind of fun. Right?

Yes, by all means. Too Human reminds me of Mass Effect in a lot of ways, mostly because of the unwieldiness of the menus. But also because it's a big mess that probably sounded neat on paper.

I think I was having the same reaction as you are 2 hours in, Iroquois, but starting around hour 3 or 4 it began an unstoppable downward slide. It goes from being a game that's fun in spite of its flaws to a game whose flaws overwhelm its virtues.

Good post, but you forget to mention that, in Bionic Commando at least, you can change the button scheme.

Thanks, John. I didn't mention it because I didn't know. But that is, of course, the best possible solution. I'll amend the post.

I suppose it's not surprising that I missed that...

Actually, you can remap the controls in Bionic Commando, which is the first thing I did (why they didn't do it like that to begin with, I have no idea).

For whatever reason, other user-centric tech industries seem to be better at non-QA usability testing than gaming is. Putting a dozen people (familiar with brawlers) in front of Too Human would have almost certainly revealed these issues.

I really don't understand why any cutscene/cinematic/whatever in a game is unskippable, especially if can appear more than once. Sure, it's fine the first time, but the 100th? Who wins in this situation?

If someone wants to watch it in full every time, there's nothing stopping them. But why put barriers in the way of those folks that just want to play your game? Sure, some people may skip over the artists' and programmers' hard work, but ye gods, that's much better than forcing an aggravating experience upon the player.

Nelsormensch, absolutely. The weird thing is that it can feel like nitpicking, say, when you complain about how obnoxious the Valkyrie death sequence is in Too Human. Dyack kind of brushes it off in this Joystiq interview, and always wants to talk about the BIG HUGE INNOVATIONS AND IDEAS in his game. But the thing is, they've made it impossible for most users to appreciate the good things they've done, because we're too busy watching that freaking Valkyrie over and over! You wonder how this never came up during QA.

I had the same experience with Mega Man Anniversary Collection on the GameCube. I was super excited about it, dropped my $40 on it or whatever, brought it home, saw I can remap the controls and they had totally screwed them up, never touched the game again.

Game players experience a lot of games on the same controller but it doesn't mean that piece of hardware forces analogous mappings in different games. Our desire to press certain buttons is not only a matter of convention and ergonomics, but what I like to call "latent control muscle memory". Actually, I don't like to call it that, but it does a decent job of describing it.

Say you've been playing Grand Theft Auto IV for the past month and you beat it and switched to Mass Effect. Whenever you want to get in the Mako, you instinctively press "Y". Not because the convention of gaming is to press Y to get into a vehicle, but because that's just what you're muscle memory has associated with that action. I still have trouble with Xbox 360 games because my muscle memory has not been wiped out since my SNES days. I press what I think is 'X' but is actually 'Y' on occasion because I spent so many years with that being the case on a Super Nintendo controller.

I'll even find myself playing a game pressing a certain button hoping an action will happen without even understanding why I'm pressing it. "What game was I playing recently where 'Y' is jump?" I think it's this subconscious behavior that is most interesting and one of the things game designers need to keep in mind.

Well, I've already said my bit about Too Human, however I've got something to say regarding the control schemes.

Games that require repetitive use of two buttons, like Bionic Commando, for instance, need to understand that just because two buttons are labelled A and B doesn't mean they're the primary buttons.

As standard, in Bionic Commando, why couldn't A and X have been used? They are, in fact, in better position for repetitive use of A and B and better reflect that original game experience, as you've hinted at. Of course, you have to deal with the fact you're no longer playing with "A" and "B".

What I find strange, Mitch, is the difference between the Xbox 360 and the PS3 controllers. While fundamentally the same, with equal numbers of buttons and roughly the same placement, excepting the left analog-stick and d-pad reversal, the shoulder and trigger buttons serve different purposes.

On the Xbox 360, the triggers are shoot/throw grenade in shooters, whereas on the PS3, the R1 and L1 front shoulder buttons bear this burden, arguably because they're more responsive and easier to use frequently. Yet, with a game such as Burnout Paradise, the triggers on both controls still function as accelerate and brake.*

I'm fascinated by the control schemes that developers choose to use, having written about my issues with the 360 DMC4 controls in depth.

In DMC4's case, the developer kept the control scheme identical between the 360 and PS3 game, which resulted in the 360 controls assigning the primary and secondary attack buttons to Y, the most difficult button to reach, and X, which in hindsigt is probably appropriate for the frequently used "shoot".

* I assumed that X on PlayStation 3 would be accelerate and was stuck wondering why the car wouldn't go anywhere but would occasionally boost after I'd been hit by other vehicles for a while.