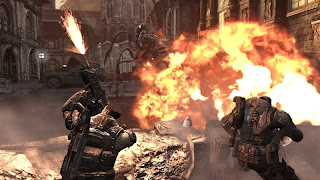 Above: Look, it's my blog and I can re-use images if I want to.
Now that nobody cares, my Gears of War 2 review is up at thephoenix.com. If you're a regular reader, you probably know the gist: campaign is good but not great, Horde is awesome.

With a little distance from its release, though, I have a couple more thoughts, neither of which necessarily has to do with the game itself. First, I understand that game publishers want to capitalize on holiday buying, and that's why they tend to release their biggest games in October and November. But as a gamer, it continues to frustrate me that I'm forced to choose between good games during this short period of time. If something like Gears had come out in wintertime or summertime, I probably would have happily devoted weeks to playing Horde. Instead, I pretty much had to drop it in order to move onto Left 4 Dead, which I like better. Granted, in different circumstances I might have bought Gears 2 and only Gears 2, and been quite satisfied with it. I still don't understand why publishers don't make more of an effort to release games when the spotlight will be all theirs.

Second, am I crazy, or is Gears 2 not making nearly the impact that the original did? When the first one came out, I feel like it's all people were talking about, and if I recall correctly it was the most popular Xbox Live game for a time. That doesn't seem to be happening this time.* It's not as though Epic did a faceplant or anything, and there's still not that much multiplayer competition this season. Far Cry 2's multiplayer doesn't seem to have caught on. Dead Space, Mirror's Edge, Fable 2, and Fallout 3 don't even have multiplayer. Is everybody playing the new Call of Duty? (Is everybody playing the old Call of Duty?) Or is everybody playing Gears 2 and I just don't realize it because I dumped it as soon as a good-looking newer game came along?

*Note: I am too lazy to look this up and confirm.
Posted by Mitch Krpata at 9:00 AM

I agree on Gears 2 not having much of an impact on the gaming community, think its just a case of 'been there done that' but who knows.

Gears of War 2 is really the Pepsi to Halo's Coke, a jock game like sports games; it does nothing new, it just does what it does well.

So there's nothing to say! It comes out, people buy it, and that's that.

Everyone at my work is playing it, and only it. I don't think they've even heard of Left 4 Dead. Far Cry 2 and Fallout 3 are the only others that have been mentioned (and by a former gamestore worker, who mainly talked about the former with regret).

This might shed some light on your question. Check out the Xbox Live activity post over at Major Nelson's.

Yep, that explains it. That Halo 3 is still number one blows my mind, but it's another reminder that the subset of gamers who read and write blogs is a small one indeed.

Wow, I'm absolutely shocked GTA IV is still up there.

I was going to suggest that we're all playing L4D, but obviously not on XBL. Now, if one were to check Steam stats, I think the picture would be a bit rosier.

I'd rather play CoD4 than WaW. I haven't actually touched Gears 2 yet and don't have any ambition to -- though I'll probably get round to it come the holidays.

At the moment I'm knee deep in Midnight Club LA and absolutely LOVING it. Disappointed, however, that there isn't more of a community atmosphere to the game.

Apart from the fact that it somehow manged to fail to capture the zeitgeist in the face of games like GoW2 and Fallout 3, the multiplayer is somewhat illogically turned into a stat-grind to unlock those weapons that can actually kill people. I guess they did it because in the single player game 'progress' is reasonably steady, and is all about unlocking the newest and shiniest weapons, however the need to unlock all the good weapons puts newcomers on a slippery slope that leads to little reward and much death.

I mean, I frigggin' LOVE the game and I couldn't stomach more than a few hours of multiplayer. A few ultra-dominant strategies had already turned up only a few days post release - like using the secondary weapon grenade launcher, which is pretty much an instant kill if you can get it anywhere near a person...

I gave up, even despite the fact it has that admittedly awesome map creator/editor.

You're not crazy - GOW2 hasn't really done anything to wow me. Horde is great - in fact, it's the only mode worth playing to me. Campaign was more of the same and the multiplayer continues to be unsatisfying and clumsy.

I'm much happier with COD:WAW and Fallout 3 - I think I'll trade in GOW2 for Left 4 Dead

I actually liked the campaign better than most people. I blame it on the Tom Bissell article in the New Yorker.

As for the other stuff, I liked the Horde made when I could play it. But the thing that gets me about Gears multiplayer is the control.

I never liked how stiff the movemment was.

To listen to my hallmates, the only two games released this year were Pro Evolution Soccer 2009 and World at War.

Ours is truly a lonely existence.

I'm content to wait until the new year to play Gears 2, and I probably won't buy it. I bought the first one and loved the co-op, dabbled a little bit in multi-player, and then sold it back, realizing I'd probably be able to rent a new Gears of War game every year or two and get my fix of the same gameplay.

Also, CliffyB doesn't like renters, so I'm doing it to piss him off :)