Kind of funny, kind of sad 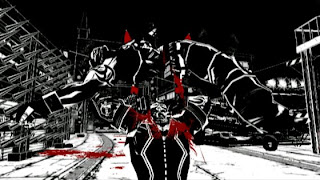 Above: The dreams in which I'm killin' are the best I've ever had.
My review of MadWorld is up now at thephoenix.com. I predict this one will not attract as many literate comments as the Resident Evil 5 review did. (By the way, defcon, wherever you are, I appreciate your efforts.)

I don't know if anybody else feels this way, but over the past five years I've played so many video games that they've all started to blend together. Any time something comes along that seems new or different, I'm interested. Even if, in the case of MadWorld, the gameplay really isn't that new or different -- just the packaging is.

As a beat-em-up, it's not much to write home about: it's fairly easy, the enemies mostly stand around waiting to be slaughtered, and the lock-on targeting system is awful. As for the promised buffet of sumptuous murder options, well, it's there, but mostly you just slam people into spikes over and over again.

MadWorld was developed by Platinum Games, the reconstituted Clover Studio. They're the same people who made Okami, my 2006 game of the year, and God Hand, the campy brawler that was either way beneath me or way above me. (I didn't play any of the Viewtiful Joe games.) MadWorld shares some traits of both games. It's more immediately playable than God Hand, and shares the same attitude and sense of humor. And it's got the striking aesthetic of Okami, without, let's say, any of that game's considerable virtues.

Still, there's a lot to like here. I'm a little surprised I haven't yet read raves of it. This seems destined to gain a cult following. Maybe the swift dismissal would be to say that we already played a satirical, lowbrow adventure game on the Wii, when it was called No More Heroes. Which wouldn't be totally unfair. But it could be taken as a compliment.

Related: The Sega strategy
Posted by Mitch Krpata at 9:00 AM