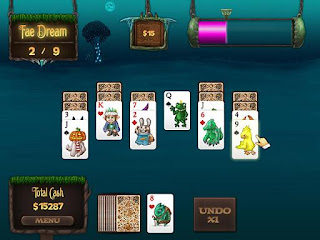 Above: Faerie Solitaire
One of the best games I've played in the past couple of years is Fairway Solitaire. It was a version of golf solitaire, which I hadn't realized was a thing, with some incredibly smart design decisions and a fantastic presentation. The replay value is great -- I downloaded it a year and a half ago, and I still play it often, trying to beat every high score. If you haven't played it yet, you really should. You can buy Fairway Solitaire (affiliate link) at Big Fish Games for hell of cheap. Well worth it.

So I didn't need much convincing to play Faerie Solitaire. It's essentially a re-skinned Fairway Solitaire, trading gentle humor for high fantasy. The gameplay basics are identical -- draw a foundation card, then remove any card from the board that's one higher or lower. Try to go on big runs to earn score multipliers. Clear the board for a perfect score. Every game consists of 9 different card layouts to be cleared.

It's pretty straightforward, but Faerie Solitaire, like Fairway, adds several tools to the player's arsenal. By earning money after each hand, you can buy upgrades: the ability to see the next draw card, extra mulligans, or a ring that will allow you to blast one card off the board. Some cards on the board are blocked, either by ice or by a thicket of thorns, and can only be cleared by removing a designated card from the board. There's just enough variation to keep things interesting across all of the levels.

And they are "levels" in this game, because Faerie Solitaire follows a storyline. I'll admit to not being terribly enchanted by it -- a kid wakes up from a dream and follows some faeries all around the goddamn place before defeating a sorceror of some kind -- but the narrative makes for an excuse to visit lots of different settings. The boards include fiery volcanoes, deep woods, and wind-whipped ice levels. The presentation is really good, from the panoramic drawings that makeup the cutscenes, to the ambient sound effects and ethereal background music, which I believe is an original composition.

The replay value isn't quite there. Despite some challenge rooms, which I haven't finished yet, it's easy to whip through the campaign. The bigger problem is that completing a 9-hole level is a matter of meeting a few criteria, usually some combination of filling the combo meter within a time limit, earning a specified amount of money, and getting a designated number of perfects. If you accomplish all your goals by the third hole, then there's no reason not to haphazardly click your way through the next six. In Fairway Solitaire, by contrast, the overarching golf conceit meant that every hole had to be your best. And that's also why I keep playing Fairway.

Still, Faerie Solitaire is quite good on its own merits. It even kept me up until 1 AM one night, something inFamous, Prototype, and Red Faction have all failed to do. I'd certainly recommend checking it out (affiliate link), but only after you download Fairway.
Posted by Mitch Krpata at 9:00 AM

Need to send you a new link... we've added Master and Impossible difficulties among other things.

We're also working on a desktop pets addon, which will be free to everyone, and will allow more interaction with the pets. :)

I could definitely use those. I'm about to head back into the challenge rooms, actually.

I enjoyed reading your post. Keep posting more about the new versions of Solitaire games. I'm looking forward on reading more of card games on your blog. :)