Games of the decade: An introduction 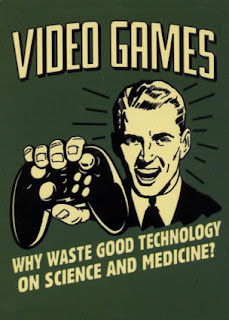 Above: The first GIS result for "video games."
You might have heard that the end of the decade is approaching. If you read, well, anything, you might also know that everybody with an opinion has to rank their favorite everything of the decade. It's the law. Who am I to flout convention? Over the next few weeks, I'll be sharing with you my favorite games of the aughts.

This isn't intended to be a definitive or an objective list. It's not the "best" of the decade, nor a list of the most important or influential games. Although they'll be published in somewhat ascending order, they're not even ranked. I'm framing it this way for a couple reasons. One is simply that there are huge gaps in my gaming knowledge, especially from the first few years of the decade. At that time, I was dirt poor and nobody was sending me anything for free, so I missed out on some likely favorites by circumstance. Plus, the last thing I want to do is get into a futile debate about which games are ranked too low or too high, as though there were a mathematical formula involved.

Instead, I want to do two things. First, whatever your thoughts are on these types of lists, I think it's nice, every once in awhile, to stop and appreciate what we already have. Ten years is a lifetime in the video game industry. In the year 2000, publishers were still releasing games for the N64. The PS2 was about to come out. Xbox Live was a gleam in J Allard's eye. PC gamers were buzzing about something called Deus Ex. That was all this decade! It's astonishing. I'd like to celebrate that.

Second, these writeups will be wholly subjective. I haven't written them all yet, so I can't say to what extent this will be the case, but they're not intended to be penetrating critical essays, or even garden-variety reviews. Playing games can be an intensely personal experience, and wherever possible I'd like to talk about the circumstances in which I played a game that turned out to be a favorite, or in which certain games have guided and shaped my approach to writing about all games.

That's the game plan. I'll be posting one game every day beginning on Monday, and continuing throughout the month of December. I hope you enjoy it! If not, it was nice having a thousand subscribers for a while there.
Posted by Mitch Krpata at 9:00 AM

Labels: Games of the Decade