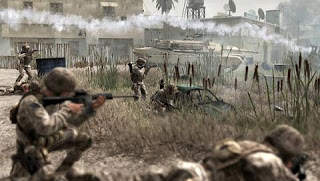 Above: Capitalism, a love story.
Designing a multiplayer game has got to be tricky. With a single-player game, a player who finds the game too easy or too hard can usually make an in-game adjustment to suit his tastes. In multiplayer, that's not possible, especially in a game like Modern Warfare 2, in which new players are constantly rotating in. The risk is that players who are much better than average will tend to dominate, while players who are much worse than average will have a hard time competing. And that's not fun for anybody.

Developers generally choose from at least one of three approaches to level the playing field:
Matching up players based on their ability or rank always seems like a good idea, but it never seems to pan out in practice. Besides which, how are bad players ever going to improve if they aren't operating outside their comfort zone? The ideal situation, from a training standpoint, would be to constantly be playing against players one tier above you, if such a thing could be calculated. But you won't ever get to win in that case, either, even as you're improving.

Giving help to bad players is a good idea, but it has to be done delicately. Nobody thinks it's fair when the best player loses thanks to heavyhanded intervention by the game gods. How many times have you been cruising to a victory in Mario Kart, only to be undone by a succession of lightning bolts and purple shells? Often in games like that, it seems like being skillful is a detriment. What you want to be is second best, so you can zip past the leader right after Zeus strikes him down.

Incentivizing good play tends to work the best. In Modern Warfare 2, you earn XP for killing an opponent, but you earn more XP for killing him with a headshot. That's a nice touch. You're rewarded for being good, without being punished for not being quite as good. On the other hand, the killstreak rewards can seem like a case of the rich getting richer. It's not easy to get a killstreak long enough to call in the heavy artillery, and when you're still hanging out at the bottom of the learning curve, little is more terrifying than hearing the whine of your opponent's jump jet hovering over the battlefield. 25 kills in a row gives you the ability to deploy a tactical nuke -- if you can kill 25 people in a row without dying, you basically are a tactical nuke.

But the killstreaks are balanced nicely. They don't get out of hand. For one thing, I initially thought that you could only use one reward per killstreak -- i.e., call in your UAV after three kills, and your counter resets to zero -- but it turns out that you can use each killstreak ability as it comes. And the UAV is even persistent, after a brief cooldown. A big killstreak may be hard to come by, but even a mediocre player can occasionally luck into smaller ones, and it's nice to know they will be immediately rewarded.

Infinity Ward's other good idea is the deathstreak, lower-level help given to players who are getting killed over and over with nothing to show for it. Die a few times in a row and you're given the option to steal another player's class. It's a good way to switch it up when things aren't working for you. Die a little more and you might get the "last stand" perk, which lets you keep firing for a moment after dying. It's a smart way to keep bad players in the game without giving them an inordinate amount of help. If Modern Warfare followed the Mario Kart model, then the tactical nuke would come from a deathstreak.

Overall, the multiplayer is very well balanced. The best reap the biggest rewards, but the worst have a strong safety net. And for the rest of us in the middle, we are at least competitive, and who knows? Maybe the next care package will have that nuke in it.
Posted by Mitch Krpata at 9:00 AM

Your list of 3 things that developers do to level the playing field applies to MW2, but there are a lot of other ways to have players with disparate levels of experience have fun together. The original PC Battlefield games had command structures where 64 players could organize themselves in a way where there would be actual leadership and coordination, even in public matches. Also, going back even into the late 90's, PC FPS games incorporated real class systems where you didn't necessarily have to be the headshot demon to contribute to your team - you could be very good at support roles. That's been carried forward pretty elaborately into games on the PC side like Red Orchestra (where your class may not even have a weapon, but is the class that can fly a plane), but it's stagnated horribly over the past few years.

Hence, the uproar from the PC community over MW2. The core MP FPS PC crowd has zero use for matchmaking systems and IWNet, and removing dedicated servers and modding killed whole communities that plays these games in a completely different way.