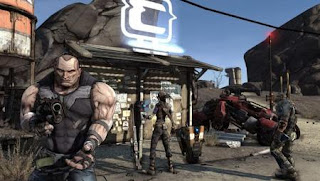 Above: Friends forever / Always we'll be friends
It's amazing what a powerful motivator leveling up can be. In any game with roleplaying elements, the promise of dinging the next level is what keeps you grinding through repetitive and, let's be honest, often un-fun gameplay. You know your hard work now will pay off later. (Sometimes much later.)

Borderlands does a better job than most of keeping you focused on this goal. Your XP progress bar is always shown on your HUD, right in the center of the screen. When it's nearly full, you'll do almost anything to push it over the top. When it's nearly empty, it's so shameful that you need to redeem yourself by taking on as many missions as you can.

But Borderlands also discourages grinding in the traditional sense. The difference in XP awarded is enormous, depending on whether you're killing garden-variety enemies or completing missions. My soldier character is at level 34 now, and I'd guess that I've only leveled up in the ordinary run of play once or twice. Every other time, it's either been upon killing a boss, or turning in missions.

The way the missions are stacked is pretty clever. They're not clever quests on their own -- almost all of the "go here and get this" variety. You can accept several missions at a time, though, and you don't earn your XP at the moment you've completed the objective. You have to turn in, which usually means returning to the place where you picked up the assignment. This is often very far away. As a result, it's easier to complete multiple mission objectives at the same time, and have several quests in your mission log marked as ready to turn in. Then you'll turn them all in at once for 40 or 50 thousand XP.

Missions are categorized by difficulty, according to level. If you're at level 25, a level 25 mission will be designated as "normal" difficulty, while a level 27 mission will be "difficult" and level 23 will be "trivial." These are often correct, and it's astounding what a difference a level makes. When the League of Extraordinarily Gentle Men first broached Old Haven, one of the best designed "dungeons" in Borderlands, we were ripped to shreds. Our first encounter ended with several deaths, a couple of revivals, and a hasty retreat. Two levels later, a couple of us went back in, and although it was still challenging, we accomplished our objective without ever risking failure.

Gearbox dangles one more carrot in front of you during the course of play. It's not uncommon to find weapons that can't be used until you've reached a certain level. Your inventory is pretty small in this game, even as it can be expanded over the course of play, yet it's impossible not to allocate one crucial spot to the bitchin-est sniper rifle you've ever seen, which sets dudes on fire and never needs to be reloaded, knowing that it will all have been worth it in eight hours or so when you've finally leveled up enough to use it.

With each level boost, your character grows appreciably stronger. Your bullets do more damage. Enemy attacks hurt less. The action points that you assign become exponentially more useful. My ammo-regenerating turret still isn't very useful for supplying my teammates, but no longer is it a wimpy sidekick. It fires in five-shot bursts, with my choice of elemental power. And with a much reduced cooldown, I can toss it onto the field numerous times per battle. I finally agree with Roland when he exclaims, "I love this damn thing!"

A few times before, I've mentioned that games are often more like work than they are like play, and Borderlands is a great example. Much of it is about putting your head down and taking care of business. Gearbox did such a good job of spacing out the rewards, and making sure that one is always visible around the corner, that it rarely falls into the trap of feeling like a simple grind. Sure, it's like work, but payday is every day.
Posted by Mitch Krpata at 9:00 AM

I don't think grinding is completely discouraged in Borderlands, but the game does nicely do away with random combat against low level enemies since you can either drive by them or simply run them over.

And grinding is actually somewhat necessary, but is encouraged through the addition of side missions. As someone who has died multiple times at the hand of a main quest boss, I have found side quests as a great way to grind my way through the levels.

In the end Borderlands is a great action game with a mild sense of humor, gorgeous graphics and animation, and spot on controls. I made it to level 20 before stopping, wishing it was a bit shorter and a tad more focused.

I do hope to finish it one day...but Dragon Age Origins comes out tomorrow. It will be several months before I resurface.

Good read, you really captured the fine line between grinding and pleasurably advancing in these games. It always reminds me of being a line cook and the difference between the line blowing up on me and skillfully resolving a mountain of tickets rapidly. It's the same work, y'know? You're still making the same plates, but because you know what's going on you can make it so that you advance much more rapidly than if you were just screwing around. It's the system itself that you're engaging with, not really the combat or monsters.

I also can't help but notice that if you replace every instance of the word "Borderlands" with "World Of Warcraft" the post would still be completely accurate.

I'm not a huge WoW player, but I do have an account and play, and it's impossible to deny the similarities.

You get enormously more XP for missions than for random enemies. Missions are best done in tandem so you don't waste time traveling to and fro. The HUD is in the exact same place, it's even divided into similar smaller sections. The difficulty rating for missions and boost in XP you get for completing the harder ones is similar right down to the color coding. The difference between each level affects your performance in appreciable ways, and you get loot you can't quite use, but when you finally can it's a good day...

It would appear Gearbox spent a lot of time studying what makes WoW great, and figuring out an awesome way to make that fun for a group-based-shooter.

Smart move. I'm having a blast.

Chris H., I think your points are valid though I've never played WOW.

But Borderlands is definitely derivitive and has taken lessons from many games to make it fun.

That's not bad, though, as I rarely if ever see an original game (that I like anyway).

Borderlands sounds like a marriage of RPG and Shooter - as far as I'm concerned, the happy-ending version of Mass Effect tried to do but failed on both counts.