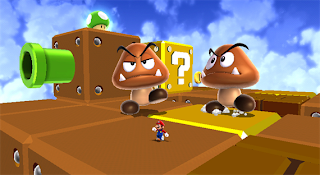 Above: Feeling dwarfed.
Every time a new Super Mario game comes out, I approach it breathlessly, and spend the first few hours in a reverie, jumping and climbing and squashing mushrooms with abandon. In 25 years and countless iterations, something core to the Super Mario experience hasn't changed. Playing Super Mario Galaxy 2, which I reviewed for this week's Phoenix, isn't a nostalgia trip as much as it seems to unify a lifetime of gaming into a single moment. It's like playing games was when I was a kid; it's like playing games will be when I am old. It almost exists outside the normal progression of games.

That sounds like high praise, doesn't it? And it is, in a sense, and probably the sort of sentiment that has earned Super Mario Galaxy 2 a Metacritic score of 98, one of the highest ever. I can't say the reviews are wrong, as though I feel like we'd played a different game. Galaxy 2 is a playground through which a few basic gameplay principles are applied rigorously and with increasing ingenuity. This is virtual play in its purest form. I get that.

I just don't want to play any more. After the first few hours, the sugar rush wears off. I find myself trying over and over to acquire new stars, failing over and over again until the fun is gone and it's become a grim sort of attrition. Galaxy 2 hands out extra lives like breath mints at a chain restaurant, so it's rare that a single challenge results in a game over screen. But, in a way, it's almost worse to have 20 tries or more to get something right, when it stopped being enjoyable after the fifth try. I can't give up now! I've got 15 more tries to get this star!

Why am I trying to get more stars? So I can get more stars, of course. Lots of games use feedback loops like this, successfully, but here it's unadorned. I have a hard time imagining the player who truly desires to save the princess. Finding her is secondary, maybe even tertiary, to the ultimate goal of mastering a hostile game world.

Galaxy 2 does have lots of sights and sounds that I want to experience, but I don't want to have to earn it in blood. Ultimately, I don't play games to be good at them. These days I can't imagine why else I would play a Super Mario game. It's not that Galaxy 2 is the hardest game I've ever played, it's that there's no other factor compelling me forward -- no story, no moments of serendipitous delight, nothing but the next looming challenge.

I have the same problem, I think I'm just getting old. My 14 year old self could have done it.

Now, not so much. I pretty much suck at most games.

Than I would recommend Joe Danger (PSN): retro-style fun with an incredible enjoyable learning curve. You will love it!

Yea man. SMG2 is def the best platformer I've ever ever played. And you're so right about it's timelessness. It's the past present and future all rolled up and put on a disk for our enjoyment. And I see what you're saying about the novelty of the game wearing off, but for me, the next bigger challenge is what keeps me coming back for more. That's what I love most about the game. And there's nothing grim for me about multiple attempts to solve a puzzle or beat a boss...In fact, when I finally do accomplish a goal, it feels even better after such initial failure!

It's an interesting spread, and I certainly have mixed feelings about the issue.

"But, in a way, it's almost worse to have 20 tries or more to get something right, when it stopped being enjoyable after the fifth try. I can't give up now! I've got 15 more tries to get this star!"

This sucks. Feeling compelled, and maybe even addicted, to getting stars for stars' sake is not so fun. I actually stopped playing Sunshine as a completionist when I realised how much grinding those blue coins were going to take, but I don't feel like I missed the spirit of the game, even if I didn't 100% it. In fact, I had a much better experience by not letting my compulsion ruin it for me.

"it's that there's no other factor compelling me forward -- no story, no moments of serendipitous delight, nothing but the next looming challenge."

I'm compelled to see what amazing, crazy thing Miyamoto et al is going to pull out of their hat next. Experiencing the stages are the first reward for me; mastering the challenges is secondary. And as much as some of the prankster comets make me want to pull my hair out, seeing something like Beat Block Galaxy in double time gets me to completely forgive them as I stand awed in the experience of their creation, wondering if I can do this thing.

Then again, I love exploration and experimentation with a dollop of fiero.

Amen, it is hard playing those games, I still can't get very far in the original Super Mario Galaxy!

Might get the second but I really should finish more of the first, even if the attrition kicks in as usual (as it did with New Super Mario Bros, Super Mario 64, etc. etc.). Is it worth 98% on average if it just gets very boring pretty quickly eh?

Ps3 controller said...
This comment has been removed by a blog administrator.
2:01 PM

one of the best iphone Applications Store offering you best and coolest iphone applications for 2010. Simply visit the site to find the great deals.