Over a long weekend, I had the chance to sink nearly 48 hours into a superb new game called Backpacking: The Official Game. Part strategy and part survival simulator, Backpacking also prominently features a Wii Fit-style exercise component (with the peripherals to match). I've enjoyed the developer's previous efforts in the past (among other things, the creators of Backpacking: The Official Game brought us Non-Virtual Snowboarding and Actual Paintball), so I was excited to dig in and review this one. 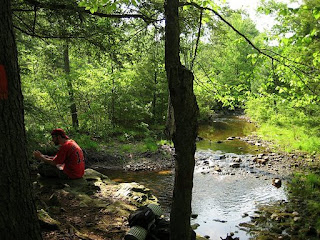 Let's get it out of the way first: this game is gorgeous. My computer couldn't meet the minimum specs to run Crysis, but somehow, without any computer at all, I was treated to visuals that blew even Crytek's best away. The broad strokes of the game's forest setting are impressive enough. The draw distance can seem infinite at times, and there are some cleverly implemented twists and turns that seem maze-like. But the details are where Backpacking really shines. Individual leaves sway in the breeze, rippling streams cascade over rocks, and bugs scurry over gnarled tree roots. One might expect the all-green palette to get monotonous, but somehow it never does. (Still, it's a treat when the level design opens up to reveal an electric blue sky!)

I usually associate a thumping, orchestral score with games of this genre. Somewhat surprisingly, Backpacking eschews a musical soundtrack altogether in order to focus on an authentic ambient experience. Sometimes, the environmental noises are so subtle that you have to stop and listen to pick them up. With several channels of audio playing simultaneously, it's stunning that most sounds are crisp and distinct. Birds chirp in full surround. Twigs snap underfoot. A late-night thunderstorm sequence is the closest Backpacking gets to grandstanding, but it's executed so well that you forgive the developers for showing off a bit. You can really feel the rumbling of the bass!

To be honest, it's a bit tricky to get the hang of Backpacking. The somewhat onerous peripherals necessitate a slower pace in navigating the maps than in most games. The emphasis isn't so much on ease of use as on realistic player feedback. For example, when the terrain in the game world slopes upward, you'll need to push your buttons harder, in order to adjust. Taking a page from classic sidescrollers, Backpacking also has plenty of obstacles that require the player to jump from one platform to another. But unlike Super Mario Bros., Backpacking has advanced logarithms to calculate momentum, and requires constant fine-tuning. Still, folks who've spent some time with the balance games on Wii Fit ought to find it easy to adapt. Although the learning curve seems a bit steep at first, it's well worth the effort. In no time, you'll be hopping from rock to rock and charging up hills. Above: The author's realistically modeled avatar (right), alongside three others imported from his friends list.
Gameplay

Backpacking is a little strange because there aren't very many developer-defined goals. You can stick to the trails they've mapped out for you -- although you don't have to -- but as a player you can pretty much choose where to start and where to end. (Imagine a land-based Endless Ocean). Backpacking has a robust multiplayer component. You can invite anyone on your friends list to join in. There's no cap on the number of players, but it may get complicated to handle with more than about ten or so. As a group, you can decide where on the map to head next, what difficulty level to play on, and even share resources easily. I didn't try the single player mode. I imagine it has its charms, but probably is less rewarding.

Backpacking isn't without its challenges, however. You have two power meters that run down as you progress through the game, and if either one of them hits zero, your character will die. (Bizarrely, there's no "continue" option. What is this, 1982?) The first, a hunger meter, runs down a bit slowly. You can boost it sporadically throughout the day by pre-selecting rations, as in The Oregon Trail, and deploying them intelligently. The thirst meter runs down faster, and can be filled back up when you find water sources hidden throughout the game map (there's even a water-pumping mini-game in which you strain out impurities through a tiny sieve). Although the developers went so far as to include an optional pooping side quest, only the most rigid completionists among us attempted it. 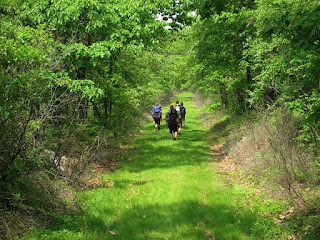 Above: The climactic escape from the forest.
Conclusion

Open-world games haven't always been my cup of tea, but Backpacking puts it all together in a brilliant package. Like with the similarly superb Grand Theft Auto IV, the experience is really what the player makes of it. Variable difficulty settings and customizable game parameters make for a robust, user-defined experience. All told, Backpacking: The Official Game is one of the best games I've played in awhile, and I'm eagerly awaiting the follow-up.

However, in the sequel, I'd really like to see a boss battle against a T. Rex.

Mitch, you really need to get a handle on your priorities. 48 hours of straight gaming is excessive, but on one title - that's just sick. You need to get outside, man, enjoy the outdoors a little, get some sun.

I bet your fiancee didn't like this game either.
-Molly

Hmm. Seems like we played a similar game over the weekend, except I was playing "Camping: The Cabin Story" wherein I went for a walk and nearly read 'The Diamond Age' front to back as the rest of my contingent widdled awae the hours playing PS3 on a 24" hi-def monitor the group had organised to bring.

All in all, I found that this would have been one game better played two-player with my girlfriend. It would have amounted to more exploration, I'm sure.

Love the write up. So, still hit by bloggers-block?

Mitch. GameSetWatch posted a link to this. You, my friend, are my hero.

That would explain the several dozen pageviews I've gotten today.

I knew I was in trouble when, one morning while biking along the Charles, I thought to myself -- "This is spectacular water FX"