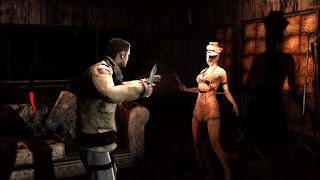 Above: Hellooooo, nurse!
Reviewing games can be harder than I think people realize, but it's still not that hard most of the time. Although it takes work to play through a game and then write a decent story about it, at least it's usually easy to figure out exactly how you feel about a game. Once in awhile, though, along comes one of those split-personality games, one that has much to recommend it, and much to recommend against it. The biggest difficulty in reviewing a game like that is figuring out what kind of reader you should be targeting.

I say this because I'm currently playing through Silent Hill: Homecoming, a game with a tepid Metacritic score, but also at least one passionate defender whom I respect. I can't help but compare it to the last game I played, Dead Space, which I liked but did not love (review to be posted soonish.) Both are nominally survival horror games, but in many ways they couldn't be more different.

Dead Space is a polished gem of an action game, made at the highest level of competence. But it's also, in the final analysis, "just" a shooter. Its scares are exclusively of the loud, icky variety. Silent Hill has that, too, but it has a more subtle and insidious approach to horror. For all that critics have rightly lauded Dead Space's sound design, it's Silent Hill's audio that has gotten under my skin: the crackle of my radio when monsters approach, the snuffling of hungry beasts somewhere in the fog. The fundamental difference between the game is one of subtext: Dead Space is all surface, and Silent Hill is all about the primal fears that lurk underneath.

And yet -- Silent Hill is also, in some ways, not a very well made game. It hews to the rules of the genre: save points are few and far between, resources are scarce, and the controls are almost useless in key moments. Excusing the combat because it's supposed to be bad sounds like a lame argument even before you've finished making it -- but one of the reasons I didn't find Dead Space as scary as I hoped was because the combat was too good! Silent Hill's problems are even more mundane than that: I lost about 20 minutes of progress when my character got stuck between a bookshelf and a filing cabinet, and I had to reset.

The other day, I was reading through some of my old reviews, and was a little chagrined to realize how inconsistent my criticisms have been across games. Sometimes sloppy details cut the legs out from under a game with a gripping story, or sometimes they seem irrelevant because I've gotten so involved in the narrative. Sometimes all the polish in the world can't make a game interesting. There doesn't seem to be a consistent metric, except that I like what I like.

This may not be as bad as it sounds. One of the only truths about video games I've ever come up with is this: A good game succeeds in spite of its flaws, while a bad game fails in spite of its virtues. You may choose to judge a game by how well it plays to its strengths, or how egregiously it showcases its weaknesses. Sometimes that's an easy call. Sometimes it isn't. The hard part is knowing that, whichever you choose, half of your readers will probably disagree with your priorities.

I think I know which way I'm going to go here.
Posted by Mitch Krpata at 9:11 AM

"Sometimes sloppy details cut the legs out from under a game with a gripping story, or sometimes they seem irrelevant because I've gotten so involved in the narrative. Sometimes all the polish in the world can't make a game interesting. There doesn't seem to be a consistent metric, except that I like what I like."

Me too. It kind of sucks that there are actually people out there who think they have a reasonable platform to stand on in demanding some kind of machinelike consistency on these subjective things.

But even still it's made me second-guess myself too -- ergo, this is an awesome thing to keep in mind: "A good game succeeds in spite of its flaws, while a bad game fails in spite of its virtues."

I think I'll etch that into my gray matter a little bit.

I find that most games, when made by passionate people who care about their work, will find a way to communicate their value to me. There is just some sort of sixth sense that triggers when you realize the person put something that communicated a genuine idea or artistic statement.

L.B., that's right. It's impossible to define, but you know it when you see it. 9 times out of 10, I'll take that over the competent but soulless, assembly-line game.