Space is the place 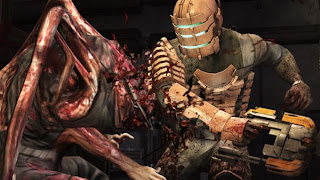 Above: A commonly seen Dead Space screenshot.
My review of Dead Space is up now at thephoenix.com. As usual, space restraints kept me from mentioning a couple of things I would have liked to. Briefly:

-The audio really is spectacular, but upon reading some other reviews, it seems that I missed out by not having surround sound, or any kind of home theater setup at all. It's a real shame. If you haven't played it yet, I'd recommend headphones. Or maybe you have a sweet 5.1 surround setup -- in which case, go to hell.

-Another terrific aspect of the interface is the ability to locate the direction of your current objective. All you do is click the right trigger and Isaac will generate a blue, laser-like line along the ground toward his destination. Simple, intuitive, and useful -- and occasionally dizzying in the zero-G rooms.

-Dead Space gives you the ability to upgrade your suit, weapons, and abilities by exchanging power nodes at sporadically placed workbenches. Every time I cashed in a power node, I immediately felt sharp pangs of buyer's remorse. On the first playthrough, there only seem to be enough nodes to power up a couple of things all the way. I maxed out my suit's stats -- which increased my hit points and my air supply -- but otherwise I only minimally upgraded each weapon. Maybe not the wrong choice, since I made it through without much trouble, but now I wonder what it would have been like to have some awesome firearms. (You do get 10 free power nodes and the option to start a plus game upon completion, though, and I have to admit it's a little tempting.)

-Can we talk about the ending yet? What's the statute of limitations on that? Felt like a real kick in the balls to me, but I don't want to say anything in case people are still working their way through it.

(By the way, is "Dismembers only" the most clever headline of the year? I say yes.)
Posted by Mitch Krpata at 8:00 AM

Pretty harsh review for a game that you seem to have enjoyed a lot, but slightly more informative than some others out there.

And "Dismembers Only" is good, but I'm a much bigger fan of "Nobody's Perfect"

It is sort of lame to spend most of your time criticizing something and then swooping in with the "but it's really good!" cop-out, but on the other hand, you can go anywhere for really laudatory Dead Space reviews. I thought it was important to be the counterweight.

Mine is going up later this week, and without having read yours yet (about to now) I'm pretty much going to say "I didn't like it, but that doesn't mean you won't."

I feel this is one of those few "divider" games like Oblivion where the psychology of the person will compel people in strong, opposite directions.

When people ask if they should play it, I have a hard time saying anything but yes. The reaction seems largely positive across the board, with just a few of us killjoys around.

But I liked it, really! I really did. I played all the way through and never lost interest. That's more than I can say for a lot of games.

You liked it more than I did, then.

You can appreciate it either as survival horror or as shooter, and it's a optimal combination of both that doesn't do anything that hasn't been done on either.

Quake 4 and Doom 3 were scarier, jumpier, and had better combat.

Other survival horror favorites were actually not brawls; they have puzzles and unpredictable elements and low ammo where you can't just buy a crapload of your favorite ammo.

Er, done with the mini-review...I think I'm going to blog about it after the review is up.

I'm throwing my review up in the next week or so, too, so I also won't be reading yours Mitch, however from my brief time with the game (up to Chapter 4), I'm not as happy with it as I thought I'd be.

In fact, I have no real urge to continue on. This might sound stupid, but I'm at a stage where I'm simply marvelling at the environments and lighting rather than enjoying the game.

Feels like a balls-to-wall action game with some elements of horror tacked on. At present, I think this is because it lacks "atmosphere". It's dank, blood-soaked hallways, with amazing design, but it doesn't FEEL like horror -- more like a slaughterhouse, or that blood-soaked, corpse-filled corridor in MGS1 & 2.

And, that of course doesn't mean it's bad but it's not so much scary as it is simply grotesque.

Daniel, sounds like you don't really need to read this review. What you said is the main thrust of it, with the caveat that it is a darn good action game.

Mitch, good review, and very similar to one I wrote for Creative Loafing. I agree that such heavily tempered praise is kind of lame, but then so are the positively gushing reviews popping up most everywhere else.

@Daniel: Yeah, I wasn't remotely scared by Dead Space, either. But then I thought about is, and I don't think any video game has legitimately scared me. Eternal Darkness came close, what with the disorienting madness effects. Like movies, horror games usually try way too hard to be shocking or frightening, and thus only highlight their artifice. I don't know, what are some genuinely scary games?

I'm not an expert on the horror genre by any means, but most of the classics have struck me as truly scary: the Resident Evil games, most Silent Hill games (didn't really care for The Room), System Shock 2.

Resident Evil 4, despite its action focus, scared the pants off me. Dead Space was obviously going for that same overwhelming sense of imminent demise, but it didn't really work.

I was also disappointed by the lack of real psychological terror in Dead Space. Fatal Frame II was the last game that went beyond cheap scares and truly frightened me. I agree with all your criticisms of Dead Space but I gave it higher score in my blog review probably just because I am a survival horror enthusiast and excited to get my hands on anything the genre has to offer.

ps- Dismembers only is a great title

I wonder if playing on a tougher difficulty might have made a difference. I died a few times, but for the most part normal difficulty was not challenging. Maybe that made it less scary when the monsters showed up.

Just finished a non-review about why I'm skipping Dead Space, and referenced your Taxonomy article in the process.

Thought your review was a lot more honest/fair than the overly glowing ones I've seen elsewhere; I think EA timed this perfectly to release just before bigger, better games and give people a nice, middle-of-the-road filler game to play for two weeks and move on.

Brian, it bugs me, too, when reviewers clearly don't like a game but throw in that lazy "fans of the genre" sop at the end. "If you like this game, you'll like this game" is not the kind of critical insight I'm looking for. The ironic thing is that "fans of the genre" are, in all likelihood, the biggest sticklers for the details that the reviewers are criticizing! If you'd never played a horror game before in your life, you'd probably think Dead Space was incredible.