The sounds of silence 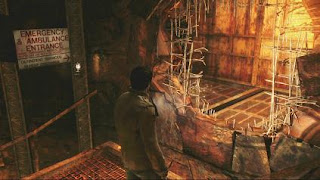 Above: Nothin' unusual happenin' here
My review of Silent Hill: Homecoming is up now at thephoenix.com.

The comparison to Dead Space is unavoidable. As horror games, they couldn't be more different. Dead Space is all surface: it's loud, flashy, and precision engineered. Silent Hill is a bit more sloppy as a game, but it's also the more subtle and disquieting experience. Both are good, but I think the overlap between them is probably as small as it could be while still falling under the general heading of horror. I liked Silent Hill a bit more, although since both games essentially did what they set out to do, I imagine that opinions differ.

I mentioned in the first paragraph of the review some of the glaring gameplay problems. I left one out: You can't invert the Y-axis for your camera controls. You can invert them for aiming a gun, which is something you don't do often in this game. Probably 80% of the combat is with a melee weapon. I'm a Y-axis-inverter since old times, and it took me a good five hours to get used to this. In a weird way, that ended up making the game scarier, since I always seemed to be looking just slightly away from where I wanted to. Given the choice, I'd still have wanted the option to change it.
Posted by Mitch Krpata at 8:47 AM

I'm not really with you on this one. Although I agree that the combat controls can be somewhat unpredictable, it's actually fairly easy to gain sufficient mastery of them that you're rarely in danger of losing much of your health in a fight. Early on, things are definitely difficult, especially in the enormously hard stretch from the end of the first boss fight to the end of the sewers. If you learn the lessons of that segment, however, you're never really threatened again.

I'm curious to hear your opinion of the plot twists. Did you buy them, or were they difficult to swallow? Did you feel motivated to complete the final boss fight after having seen the big twist?

I actually never thought the game was so difficult as when the members of the Order showed up. I died over and over once that happened, mostly because I'd gotten in the habit of spamming monsters with the dodge button. Didn't work on them.

Difficult to talk about the plot in terms vague enough not to spoil anything, but concrete enough to make a point. I actually thought the first plot twist wasn't much of one at all. Although it was interesting, it was hardly unexpected. The second one, well, that was a bit more surprising. A little too much? Maybe, but it was original.

Whoops, it was Shepherd's Glen. Damn.

The Order members can be tough, but only if they're in pairs. One on one you can just spam light-light-heavy combos with the pipe or crowbar and beat them into submission, no dodging required. They do tend to show up in twos, but most of the time you can spot them before they see you, allowing you valuable time to take one out with a gun before switching to melee for the second.

For me, the difficulty of the Police Station-Sewer segment was a result of using a lot of healing items in the first boss fight. There are no health items in the sewers (tons of bullets, though), and only two or three in the police station, and you must either kill or avoid a number of Schisms to even get those. I also personally had the hardest time fighting Needlers, so battling that many of them in the sewers, without any health items, was very hard.

I didn't really mind the difficulty, but that segment taught me to be such a skinflint with healing items that I had too many left at the end to feel any fear. The density of healing items probably should have been a bit higher early on, and a bit lower late. It didn't feel like their distribution was balanced to account for the player's increasing proficiency with the combo and targeting systems.

I thought the twists didn't work very well at all... if you're interested I just wrote a very spoilery post explaining why. If tl;dr, the summary is that I thought the gameplay was at odds with both of them.

Haven't played part 5, but in 2 the bonkers camera and controls were just something you had to fundamentally accept. It's basically the same argument as, "You don't appreciate Halo 3 unless you play it on tougher settings". The experience the designers are trying to deliver involves the player accepting difficulties.

I dunno, anytime I play a survival horror game I have to psych myself up and get into the mood for it.