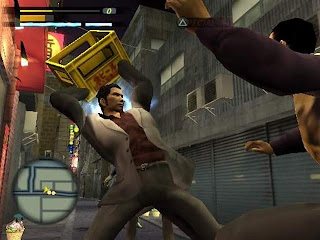 Above: A smashing good time
No, probably not the most overlooked game of 2008, but you have to admit that's an attention-grabbing title. Besides, I'm trying to write a blog post here, so let's go for it. Yakuza 2 garnered only "honorable mention" status on GameSetWatch's list of 2008's most overlooked titles, taking a backseat to games with names like "Soul Bubbles" and "Roogoo." With the exception of Pure, almost everything that GSW mentioned was an indie game -- a niche product.

I haven't played or even heard of most of those games (lending credence to GSW's argument -ed.), but I want to make a devil's advocate argument: It's hard to say it's surprising for independent games to be overlooked, because that's their nature. We live in a world where enough marketing muscle can make a million-seller out of even the crappiest games, so what are the odds that an independent game with no budget will ever get any attention? I don't like it either, but that's how things are. It may be unfair in a cosmic sense that these games never gained any traction. You may as well say it's unfair that gravity only causes things to fall down.

Yakuza 2 is a little bit different because it is a big-budget game, a game that incorporates most of the features that "hardcore" gamers respond to, and a game that does those things very well. It's got a sweeping, multi-layered storyline, an immersive setting that's packed with sidequests, and brawling combat so brutal that it makes you wince. This should absolutely be a hit.

It's not a hit, of course. I'm not sure most people even realized it had been released in this country (and I only knew thanks to Steve Gaynor's tireless Twittering about it). The original Yakuza was superb -- even made my top 10 for 2006 -- and sank like a stone in the marketplace. Maybe better marketing would have helped, or maybe the inherent problems in localizing such a culturally specific game put Yakuza behind the eight-ball from the start, but by the time Sega decided to release the sequel Stateside, they hadn't even bothered recording an English-language track. They may as well have affixed stickers to the front of each copy saying, "Even we know you're not gonna buy this."

Strangely, though, the lack of Americanized speech makes the sequel seem even better and more authentic than its predecessor. The guttural cadences of the Yakuza members are hypnotic to listen to. The storyline is still easy to follow, albeit filled with more twists and turns than a daytime soap opera, all of it anchored by its stoic, pure-hearted protagonist, Kazuma Kiryu. I can't help but think that if Sega had really tried, they could have made this series a hit. Maybe that's what they have in mind for Yakuza 3, but if history is any guide, it's not likely.
Posted by Mitch Krpata at 9:00 AM

Yakuza 2 was one of my favorite games this year, despite (because of?) the fact that it did almost nothing new or original. Well, that bit with Osaka Castle was unexpected. I also liked the decision to use subtitles rather than a dub. For Americans, to whom some of the traditions and ideas will be rather alien, use of the foreign language really helps set the stage. Consider that even some of our home-grown organized crime dramas use foreign-language dialogue to emphasize that their characters are moving in a different world.

Along with the other issues mentioned, I get the feeling a lot of "hardcore" folks, the kind that would enjoy Yakuza 2, look down their nose at new games released for previous-gen consoles. Plus if you don't still have your PS2 hooked up and don't have a backwards-compatible PS3 (or a PS3 at all), just playing that game is a bit of a hurdle.

How'd Yakuza 2 do in Japan? Much better?

Michael Abbott wrote a post about Yakuza 2 back in October, maybe September, and in typical Brainy Gamer fashion it made me feel like I absolutely had to play this game as soon as possible. And then I realized I'd have to dig my PS2 out of the closet, and find the corresponding power cord and AV cables, and clear off space on my entertainment center, and at that point I just sort of forgot about it. Maybe in January I'll hook that up and take a look at Yakuza 2and that new/old Kingdom Hearts game and maybe even finally finish God Hand. So yes, that PS2 hurdle can be formidable, even if you aren't bothered by the graphical downgrade when returning to older games.

Backwards compatibility is such a double-edged sword for the PS3. They removed it for pricing issues, right? But then I know a number of folks who are reluctant to pay $400 for a PlayStation that won't run all their old games.

I'm trying to get through the first game right now in hopes of being prepared for the sequel. I got maybe halfway through the first one a couple years ago before I stopped playing for all the reasons such things happen. I'm really enjoying it, though since I have a toddler at home I can't really play until after he's asleep, and he's a night owl, so that means I'm often hitting the sack at the same time he does. Your post really give me inspiration to sally forth and MAKE time to finish Yakuza so I can dig into the second one.

I really want to play this, but afer busting out my PS2 after a year to play a little Persona 4, I rememberd why I put it away (aside from getting a 360): the eye is dying. I just don't have the urge to buy ANOTHER PS2 at this point... hmm.

I have to say that even though this is the year that I finally got around to buying a PS3, a fair bit of my favorite gaming was done on my creaky old PS2. Persona 3 FES and Yakuza 2 were easily a couple of my faves this year, and I'm just now starting Persona 4 which seems pretty darn promising so far. As far as I'm concerned, all this stuff seems better to me than Fallout 3 and GTA IV.

The game I really want to play is Yakuza Kenzan, the version of Yakuza for ps3 that's set in the samurai era. Unfortunately I think the chances of a subtitled version of that are slim at best. I'm almost tempted to drop the 35$ on it at Play Asia and try to muddle through it in Japanese.

A samurai version of Yakuza sounds like it would be incredible.

Most of the time I'm a fan of things being subbed rather than dubbed. As for the most overlooked games, I'm sad that Valkyria Chronicles didn't make the list. That's a game that needs to be mentioned somewhere. It sold 33,000 copies.

I suppose that's the video game equivalent of Zyzzyx Road