How Killzone makes you earn it 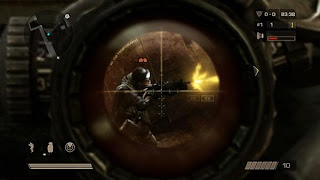 Above: An example of a weapon you cannot use for the longest damn time in Killzone 2's multiplayer.
Killzone 2's multiplayer is uncommonly deep and customizable. Players can choose from one of seven classes of combatant, like the standard rifleman, a medic, or the stealthy scout. But those classes aren't so rigidly defined, thanks to the medals system -- you can actually mix and match abilities, or "medals," to create a custom character type. You can form four-man squads on the fly, and even assemble 16-person clans made up of four squads. Plus, you can earn perks that allow you to do things like call in your own personal aerial drone to help out in combat. With massive, team-based multiplayer maps that support up to 32 players, you'll see something new every time.

At least, that's the idea. The reality is a bit different.

When you start playing Killzone 2 online, you can play only as one character, the infantryman. Your loadout consists of an assault rifle with limited ammo, a pistol, and a single grenade. You have no other abilities. By default, the game will match you with other players of equal rank or similar, so unless you decide you want to be killed instantly upon spawning, you play almost exclusively with other riflemen.

Killing opposing players and completing mission objectives earns points toward increasing your rank. You begin as a Private, and can work your way up to General (read an overview of Killzone 2's rank system). Each promotion earns you a new ability. Corporals can form squads on the fly. Sergeants can form clans, which I believe are persistent. These are not things that seem to mesh well with the chaos of a public game, although the option to respawn with your squad leader, no matter where he is on the map, is a good one.

It took me several hours of play to reach my current rank, Sergeant First Class. That's 200 points. My reward? A choice of shotgun or SMG. It'll take another 150 points before I can play as a medic. In fact, I've yet to even encounter a medic on the battlefield, thanks to the default matchmaking. Reaching the top rank, General, requires 2800 points. I can't even imagine how long that'll take.

Let's talk about those medals. You earn them by accumulating ribbons, which are rewards for certain achievements in a single match. For example, if you score at least 20 points in a match and don't kill yourself or a teammate, that's a "Good Conduct" ribbon. Eight Good Conduct ribbons will earn you the "Example Soldier" medal, which increases your starting ammo. That's pretty important, because grunts start with 64 rounds. It's easy to run out, and always, it seems, when you round a corner and come face-to-face with an enemy.

The Good Conduct ribbon is easy to earn. Some aren't so easy. One of the game modes is called "Assassination." In it, a player on one team is randomly designated the target. His teammates must protect him. The opposing team must kill him. If you are the target, and you survive, then you earn a ribbon. Five "Assassination Defend Specialist" ribbons will earn you a medal, which boosts your point total for subsequent successful attempts.

Here's the rub: On a full server, under standard settings, Assassination will be only 1 round of 6. When it starts, you have a 1 in 16 chance of being designated the target. You'll rarely have a chance to be the target, and it's not easy to survive. How long will it take to earn 5 ribbons, and the accompanying medal? Beats me. I've got 1 ribbon so far, thanks to my good friend Lady Luck. (Read an overview of Killzone 2 ribbons and medals.)

My complaint isn't the gameplay difficulty. (It shouldn't be easy to survive as the target.) The problem is the exorbitant commitment Killzone requires to play the multiplayer as advertised. You're promised deep customization and endless gameplay options, and that's not what you get. This isn't the same thing as Rock Band's lockbox. They're different types of games, with different objectives. I'm glad that Killzone's multiplayer gives you something to strive for. Still, there comes a point at which the game's attempt to provide incentives becomes a case of withholding content from the player.

Why aren't a couple of classes available at the outset? Why not a few different weapons? Why is everything that makes Killzone's multiplayer unique padlocked behind one door after another, like the entryway to CONTROL headquarters?

None of this is meant as a verdict on the quality of the multiplayer as I've encountered it so far. The network has been rock-solid, and even without the more advanced features, play has been satisfying and addictive. I can see myself sticking with it even after filing the review. But I have to wonder if people touting these features are speaking from experience or extrapolation. It's probably awesome to be a General, to customize your characters, and to participate in a coordinated clan battle. But I couldn't say for sure. I don't know who could.
Posted by Mitch Krpata at 9:00 AM

One of the keys to CoD4's successful level system is that the higher level weapons and perks weren't necessarily better, they were simply different options. The starting perks are some of the most popular perks in the game. This means that experienced players aren't given a huge in-game advantage over newbs. It can be intimidating and frustrating learning a new shooter online, and stacking the odds even further against new players is a bad idea in my opinion.

But it sounds like the pacing of unlocks is an even bigger issue for you. Ideally you want to be able to unlock something (even if it's purely cosmetic) every couple games, maybe every game if matches can take a half hour or more. You want to look at it and say "Damn, look at this cool new thing I could get if I just played one more game." One thing you do NOT want is to look at it and say "Well crap, it's going to take two hours to get the next unlock, so I'm just going to call it a night."

That's a big part of it. To use the same example again, at 200 points you get your choice of a shotgun or SMG. Well, why not a shotgun at 150 and an SMG at 200? That's only a matter of a couple of games, maybe even one game if you do well and your team wins.

But it kind of blows my mind that we're talking about a shooter where you need to earn the privilege of even using a shotgun.

Is this game good? Should I be playing it?

Is the online play at least stable enough now that people aren't losing entire matches of progress due to disconnects? I heard pretty terrible things with regards to that, I also heard it was patched.

Sounds like they went a bit overboard with the unlockables, you aren't the first I've heard complain about it. Rainbow Six Vegas did something similar, the last few ranks took damn near forever, but like Julian said about CoD4, the last few unlockables were purely cosmetic. It was just sort of an epeen boost at that point.

I've had no problems with network stability whatsoever. It's been great for me.

Daedalus said...
This comment has been removed by the author.
6:07 PM

Iroquois, I wouldn't necessarily say that you "should" be playing this game, but as Mitch has said, there's definately a lot of fun to be had.

While I don't think the single player portion of the product will blow you away, (or maybe it will O_o) it's a very solid experience.

Multiplayer, at least for me, is where this game really shines. I felt as though the ranking system was well implemented and the ribbon system (although a bit troublesome at times) was a nice addition to promote excellence during different facets of gameplay.

For these reasons, I think Killzone 2 is a game you might want to look into...you know...if you're into that sorta thing. <_<

As for online stability -- its been a little touchy at times with random disconnects and "host not available messages", but these are few and far between. On the whole, online has been very stable.