Takin' it to the street 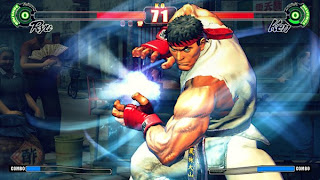 Above: Hadouken!
My review of Street Fighter IV is up now at thephoenix.com.

I had an epiphany while writing this one: I don't explain games on technical terms very well. I'm not sure whether I lack the ability, but in the case of fighting games, I certainly lack the understanding. Lots of words pop up on the side of the screen while you're playing Street Fighter IV, notifications of "counters" and such, none of which I ever conjured on purpose. The manual makes mention of arcana like "hyper armor" and "armor breaks" and "focus dashing." Again, while I might have executed some of these during play, it was never due to anything more than good fortune.

And yet, when we talk about whether this game is accessible or not, I think it's worth mentioning that you don't have to master those advanced skills in order to enjoy it. I had a blast playing this game, moreso than with any fighting game in recent memory -- maybe since Virtua Fighter 2. That's without having progressed in ability beyond the Street Fighter 2 days, when we all performed as many special moves as possible, regardless of what our opponents were doing. This method led to many more defeats than victories, for sure, but I never felt marooned as I have in so many other fighting games -- not even when that d-bag playing as Ken rattled off two perfect rounds against me in under thirty seconds.

That makes Street Fighter IV a success in my book.
Posted by Mitch Krpata at 9:00 AM

Though it's not the game's fault (is it?), the biggest thing I don't like about SFIV are the endless number of douchebag Kens online.

Next after that would be the whole Ultra Combo concept, which I talked about at Joystick Dvision.

It was weird how everybody who absolutely destroyed me played as Ken. I was wondering what was up with that.

SF4 seems to be rather inaccessible to newcomers.
Which seems odd to me because I have played SF for years.
But I have a few friends who bought it for the 360 and are having a really hard time with it. They get their asses kicked in round 3. They complain about the controls. About the difficulty of the special and super moves.
Worst of all, they insist on playing it with the analog stick, which seems incomprehensible to me.

I try and explain what makes street fighter so good, and I try to temper my enthousiasm for the game.
But they keep on ranting how tekken, which is the game they grew up with, is the superior game across the board.

Unfortunantly I'm a pc gamer so I have to wait untill I get a chance to play it.
If the game is not GFW live maybe we'll get another batch of Ken players then. But if it is, maybe we'll have a little variety in the match-ups.

Hey, thanks for the link. We meant to give you a heads up when we posted, but the week turned unexpectedly busy. Hopefully we didn't run too wild with your post's point. ;-)

I just read your review of Street Fighter IV, I liked how you handled the "stick" question.

One of the biggest suprises of Street Fighter IV is how much I actually want to play it. I initially had very little interest in the game, but upon watching a few videos, I was rocketed back to the early 90s. I'm still getting these sudden waves of nostalgia when I see a dragon punch or sonic boom.

It seems that this current Street Fighter has ventured into Smash Bros. territory: people who might not even like the genre will play the game because they have fond memories of the characters.

I liked the review - and yes, there are WAY too many Ken players with ~1000 points online. Surprisingly, once you clear that level and get into the 2000-points bracket, they all go away, replaced by Blanka and Balrog and Sagat.

And yeah, I am having difficulty convincing people that you don't need to Focus Dash Ultra Whatnot to play Street Fighter. Psyching out your opponent is way better.