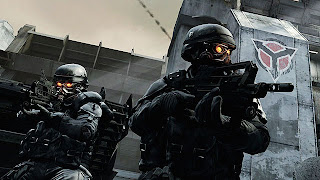 Above: PSXExtreme editors hunt for cowardly Edge dogs.
I spent several hours with Killzone 2 over the weekend. It's good. I like it. In fact, the best thing I can say for it is that when I wasn't playing it, it still occupied a lot of my brainspace. I still have more to play before I can review it properly, but, yeah, good game. Yet I couldn't get that PSXExtreme editorial out of my head. You know, the one that said:

We all know that Guerilla's title is one of the best FPSs ever made; anyone who knows this industry and has a functioning brain will admit to this. They may not like it, but they will admit to its quality. This is what good reviewers do.

And I'm wondering, what else would good reviewers do? They'd probably talk about an unstable multiplayer experience, one which is reportedly costing people significant time and progress when it crashes on them deep into a match.

They might note a lack of campaign co-op, which wouldn't be a big deal if the campaign didn't saddle you with an AI partner for nearly its entire play time. As these things go, the AI is pretty good, but strategy and flanking maneuvers are nigh impossible. Live co-op would be far preferable.

While we're on that subject, how come playing the game demands that you heal your fallen comrades over and over, but they're unable to return the favor? Not that it really matters, since the checkpoints are so close together. But it's the principle of the thing.

(And one cheap shot: Why does the healing beam resemble a 1950s ray gun? It makes me laugh every time. It looks like a prop from a black-and-white TV show, where a guy in long underwear is fighting a robot made out of cardboard boxes.)

While admitting to Killzone's quality, they might point to areas in which the quality falters, such as the massive clipping issues on the train level. First, my wounded partner fell through the floor into an unreachable area. I could not heal him, and we could not advance. Next, I walked through a wall and was trapped (though well defended!). I had to blow myself up with a grenade in order to try again.

Finally, a good reviewer might point out that Killzone 2 doesn't have an original idea in its head -- not in terms of storyline, art direction, combat dynamics, level design, and so on. It looks and feels like a mash-up of almost every good shooter that's come out in the past few years. There's an aesthetic and narrative that borrows freely from Gears of War, an approach to killbox-style firefights that hails from the Call of Duty school, and a duck-and-cover mechanism that owes a lot to Rainbow Six Vegas.

None of this is to disparage Killzone. If you're going to steal, you should steal from the best. Barring any unforeseen catastrophes, I look forward to writing a positive review. No, this is to disparage, once again, the above-mentioned editorial, which has only become more nonsensical now that I've actually played the game. What good reviewers do is call a game like they see it, warts and all.

That sounds like 7/10 talk to me you filthy hater!

Ah, but unlike Edge, I have the luxury of using half-points.

Gotta ask -- Is the title of this article a Fugazi reference? :)

Anonymous said...
This comment has been removed by a blog administrator.
6:15 AM