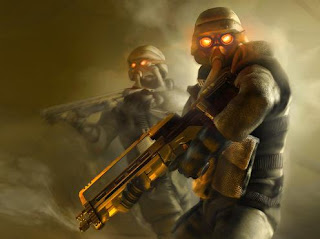 Above: You know, it almost does look this good.
Mere months after most outlets got to it, my review of Killzone 2 is up now at thephoenix.com. This is one of those positive reviews that seems to harp on the negative, mostly because I felt compelled to beat back some of the fanboy furor, as evidenced by the prominent placement of the infamous PSXExtreme editorial. But most people I know have had fully sane reactions to Killzone 2, and the consensus that it's a good shooter is one I heartily agree with.

But: Is it a system seller? That's the question that gets asked of every PS3 exclusive, from Resistance to MotorStorm to Uncharted to Resistance 2 to, uh, MotorStorm 2... So far, the answer for all of these games has been no. I think the answer is no for Killzone 2, as well. The notion of a single game as a system seller is probably a myth, bolstered by the occasional Halo. Still, when you add up all of those games, and then factor in the terrific content available on PSN, plus the rapturous reception for the past two editions of MLB The Show, you start to have a compelling case. It's a good system.

All Sony needs now is a $100 price cut, and they'll be in business. $400 is still ridiculous, even if, every six months or so, that $400 will get you a bigger hard drive and a better pack-in game. We're in a recession, people!
Posted by Mitch Krpata at 9:00 AM

As someone who briefly owned a PS3 and did play Uncharted, which was awesome, and several underwhelming games (MGS4, Formula One, Gran Turismo, etc), I'd have to say that a price cut, while in order, would have to be followed by a broader selection of games.

The Xbox 360 has shooters, of course, which are filler for me, but it has a tremendous number of great RPGs, XBLA games, and other games, all with the Western bent that I prefer.

The PS3 seems decidedly focused on shooters and quirky Japanese games and does not appeal to me. Yet.