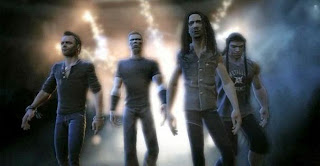 Above: Yes, believe it or not, less horrifying than Video Aerosmith.
My review of Guitar Hero: Metallica is up now at thephoenix.com. If you read last week's Guitar Hero post, then you already know the verdict. It's good. Quite good, in fact. That's why I'm now going to do what I do best: gripe about something insignificant.

Toward the end of the review, I mention one way in which Guitar Hero is still falling short. It still sometimes shows a bias toward a more primitive video game mindset, when it could stand to be more enlightened. Many of Metallica's songs have long, quiet stretches in which guitar is the only instrument to be heard. During these sequences, the programmers have given the drummer the chance to pad his score with drum fills. The fills are scored simply, by assigning one point per hit. That means that the incentive is to wail away on the pads, concerned only with hitting as many of them as quickly as possible. That's fully at odds with what the song is portraying.

My man Clint Hocking might even call it ludonarrative dissonance.

Still, damn good game.
Posted by Mitch Krpata at 9:00 AM

My biggest problem with the Guitar Hero games (I haven't tried the Metallica game -- I am not a metal fan at all) is that the music seems a little at odds with what you do on the instruments.

I have a hard time quantifying it but it seems like Rock Band does a better job of mapping music to what you see on-screen and this results in better sounding music as well as more fulfilling game play.

Haven't spent quite a bit of money buying all of the RB music for The Who, Pearl Jam, and Rush, I'm at the point now where I am just tired of the genre and wonder if it can even excite me in the future.

While Guitar Hero commits many sins against the music in the name of making a good video game (drum fills, drum Star Power, vocal fills), Rock Band is not innocent either. Their Big Rock Endings give more points for mixing up different notes hit, which is a perverse incentive for the drummer to wail on the cymbals as randomly as possible. At least Guitar Hero lets you drum roll your way through.

Gary, I fully agree. Harmonix seems to get how to construct a note chart in a way that Neversoft hasn't. But the charts in this game are pretty darn solid. It's not just that Metallica is a favorite band of mine, but also that their music lends itself while to the deconstruction of a music and rhythm game.

Robyrt, you're right about that, but usually Harmonix only puts in a big rock ending where it's appropriate (almost all of the live AC/DC songs have them, for example). It doesn't take the place of anything else in the song. The same is true of the way they tackle in-song fills -- they come during parts of the songs that would ordinarily be displaying drum notes. But there always will be compromises that have to be made. The line is different for each developer.