The Most Stereotypical Black Characters in Gaming History

Today is Martin Luther King Day, a day on which we celebrate Dr. King's life and legacy, and recommit ourselves to achieving his vision of racial equality. Race relations have come a long way since the 1960s, but there's some distance left to go. Want proof? Check out these cringe-inducing, decidedly politically incorrect portrayals of black characters in video games. 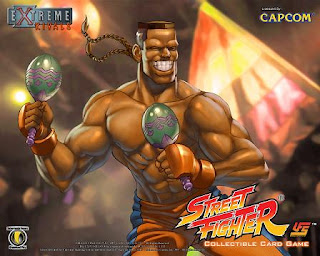 According to Wikipedia, Dee Jay was based on Tae Bo founder Billy Blanks. Billy Blanks, you may recall, also played the wide receiver who blows his brains out on the football field at the beginning of The Last Boy Scout, which is probably one of the ten best movies ever made. I guess what I'm saying here is that Dee Jay isn't really that much of a stereotype, except for his hip-hop style moves, but god damn The Last Boy Scout is awesome. 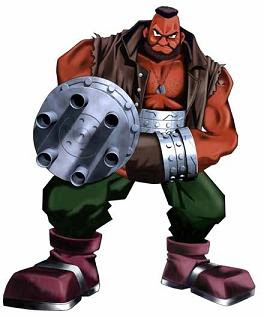 Moreso than the other characters on this list, Barret is an example of the residual racism that still hangs over global culture. He's an honorable and complex guy, quick to action but also with a nurturing instinct that informs his relationship with his adopted daughter Marlene. And yet... on the Japanese side of things, Square just couldn't help giving the guy a Mr. T haircut and a permanent scowl. The American translation is even worse, saddling Barret with uneducated, profane dialogue that makes him sound like a doofus. Why Barret, and no other character? Why, indeed.

By the way, if you're wondering why I haven't bothered to spotlight the other stereotypical Final Fantasy characters over the years, like the brooding goths Squall and Lulu, it's because moody goths have historically not been oppressed by the state and cultural institutions -- only by their parents. 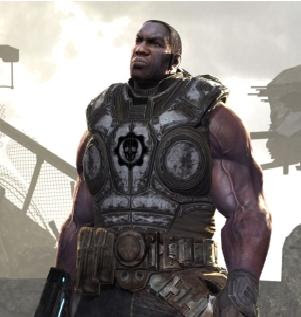 I was willing to overlook the Cole Train for most of Gears of War, even though, of all the characters in the game, he was the only one who couldn't spit out a sentence without swearing, and had been a pro athlete pre-Emergence Day. (At least Epic Games are equal-opportunity stereotypers, also giving us the tight-assed white guy, Baird. How much would it have blown your mind if Baird had been the cocky pro athlete and Cole the uptight wuss?)

Then I beat the game and was treated to the Cole Train rap song that plays over the end credits, featuring the repeatedly lyrics "Whooo!" and "This my kind of shit!" That just pushed it over the top. The only redeeming thing is that the Cole Train was portrayed by the same guy who played Terry Tate, Office Linebacker.

The Entire Cast of Def Jam Vendetta, Fight for NY, and Icon

The Def Jam games aren't games. They're a marketing nightmare. This is a case of savvy businessmen peddling an image to a large group of people who are not in on the joke. In the case of the most recent game, Icon, the horrid gameplay was really just the platter upon which endless courses of ads were served. Ads for clothes, electronics, record albums, and, most of all, the participants themselves. Product placement and celebrity endorsements are nothing new, but they should serve to accent the gameplay, not to take the place of it. Not that it matters if the game is hit. I'm sure the people who made this game are crying themselves to sleep at night, on top of a pile of money. 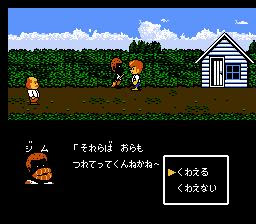 Well, geez, just look at him. That would have offended the Confederate Army. At least this game never came out in the States. Thanks to Jeremy Parish for having once posted about it.
Posted by Mitch Krpata at 3:47 PM

I have to disagree about Barrett, however. He was the first (and gosh, only?) black main character in a Final Fantasy game, and his dialogue wasn't any more profane or uneducated than Cid's. I'm not saying that there weren't some racial elements at play in his character, but I wouldn't include him as one of the "most stereotypical black characters."

Tyler Miles from the game Fahrenheir/Indigo Prophecy, however, definitely deserved a spot on the list. He was bad with money, bet on basketball, owned an extensive motown record collection and was accompanied everywhere he went by light background funk music.

I love Barret, but I figured I needed five characters to make it a real list.

I have not played the game you mention, but that sounds amazing. Another one I forgot: Superfly Johnson, from Daikatana.

This made me realize I'm still in love with Lulu.

@ Matthew Gallant: Wakka? Debatably. He's got that Tiger Woods Barack Obama everyrace-ality to him, in any case. Also is a semi-articulate pro athlete. Ahem. Thanks, Squeenix.

Gotta throw out a comment about Cole Train. Terrible rap aside, I always saw the whole thing as one big Terry Tate montage (Cole Train == Pain Train), which as a fan of the ads I rather enjoyed.

I didn't really see this as play on a racial stereotype as much as a reference to an already existing character (hey, if you've got that voice actor you might as well), who in turn is less of a racial parody and more of a professional one (even if the arrival of Courtney Cate in the series could be construed as a hamfisted way of making that point).

It's a fair point.

But the song is so bad.

...Okay list, though it could've been (A lot) better and expansive. What I mean by this is that you could've greatly expanded the list by adding such 'classic' Stereotypical Black Characters in Gaming History such as: Balrog, T.J. Combo (What is it with all the 'Mike Tyson-inspired fighting game characters, anyway? That's as low as you can get) Birdie, Jax (Bad enough he has to be 'The Strongest Man on Earth,' but did Midway REALLY have to have him be the ONLY character in the series to say some bad 70's Blaxploitation-inspired quip/sentence after he does a special move? And I won't even go into Midway's attempt to make Jax seem more 'Black' or 'Street' by giving him a Backwards Cap and that Coon-tastic 'Bling') every Black Character SNK has ever had (How many Basketball-playing fighting game characters can SNK make? Geez), damn near every black character in the GTA series (Though I give GTA a [Slight] pass, as they stereotype EVERYBODY and EVERYTHING, not just black people), Zack from the DOA series, Skate from the Streets of Rage series (I love the character in SOR2 and all, but did he really need a backwards cap and a Breakdancing Super Move?) and so many more. At least Namco, (With the exception of the 'Super-Fly' Tiger Jackson, of course) knows how to give their black characters both Brains and Personality. Not that that's impossible to do, but these Game Developers wouldn't hesitate to hav e you believe otherwise.

I do agree about Dee Jay, however--Damn near everything about him (His constant [And damn near creepy] smiling, his [Official Capcom] Profile saying he dislikes 'Silence and Maturity,' his being overly happy and musical (Relying on 'Rhythm' to somehow accentuate/hone his fighting style, and Capcom barely including him in the overall Street Fighter story) just reeks of pathetic ignorance at best, and even more pathetic racism at its worst.

These issues with Dee Jay are even more glaring when you consider the fact that Dee Jay is a pretty good character, gameplay-wise. It would be awesome to see him in Street Fighter IV, though I'll probably play Duke Nukem Forever before Capcom'll let that happen.

Barrett, you pretty much hit the Nail on the head. Also, to Matthew Gallant, there isn't much of a comparison between Barrett and Cid--If anything, Barrett's overall personality is Cid's magnified to the 10th power (Especially when you consider how quick Barrett is to anger over damn near nothing, at any given moment. C'mon, Square.)

I agree about the entire cast of the 'Def Jam' series of games, though their being Streotypical is to be expected, as the majority of Mainstream Rappers (ESPECIALLY nowadays) are walking, talking Stereotypes any way you look at it. Despite that (Glaringly obvious)fact, the first two 'Def Jam' games were awesome--I will give credit where credit is due. And hey, it's not like I'm bigging up Hip-Hop inspired gaming turds like 'Rap Jam: Volume 1,' 'Bebe's Kids,' and, of course, 'Shaq Fu.'

...As for 'Jim' from that abysmal 'Tom Sawyer' game...I'm actually at a loss for words...Well, not really, but you get the idea. That image you posted in your blog should be shown to every pathetically and so-called 'erudite' non-black gamer who is dense enough to believe that racism in video games doesn't (And never) existed. I bet if that picture would've been shown in that infamous 1UP 'Loco Roco' Editorial, then the condescending 'sarcasm' would've been reduced by at least %50 percent.

...Anyway, now I'll just sit back and wait for the next 'Super-Strong and Sooper-Stupid (Because we all know that black video game characters just HAVE to be so sooper-strong thta they're incapable of having any kind of mental acuity ['Intelligence' for the Layman's Crowd]) and/or Hip-Hop-'inspired' black character to show up in a big-budget video game.

Great blog, by the way. Sorry for the Paragraphs... lol

god guys get a life.
theres plenty of bad white characters as well out there funny though how no one mentions those!
besides in gears Augustus Cole is a great character and maybe (im not saying its any good) the actor who voices him didnt have a problem doing the cole train rap etc so why should anyone else, clearly you lot are so damn paranoid about being opressed and so on..

Actually the biggest one against GoW was the only other black guy in the game! I can get Cole acting like he did, with the Pro baller background, but what about that other guy, what's his excuse?

They've been on that planet for almost a century, everyone speaks English with mostly normal diction, yet the only guy speaking in slang "yo" this, "aye" that, just "happens" to be some random black guy(especially when everyone else at his outpost speaks normally)? Yeah, totally non-stereotypical in every way! :|

It's based on Earth, not another planet.
Locust live under the Earth's crust if not inside.

As for their language, not sure how they speak English, perhaps from the years of fighting this war?
Besides there are many games out there where some 'Alien' species just happens to speak English. E.G. Halo

What the fuck is shit, people are stereotyping them thats why I prefer to play Halo 2 and start shooting the white marines just for fun.

Oh lordy lordy lordy everything is racist in games! Just don't include any black people at all! End of racism. Just because a character is black and has a certain personality. Doesn't make it racist. Now stereotyping in video games is not bad. In fact a lot of people do act the stereotypical ways so to play on that does npt make it racist. When they announced Resident evil 5 was going to be set in Africa it annoyed me to see how many people thought it was racist. Oh so shooting the hell out of white people wasn't :/ Ifwe are going to play the race card each race can shout racism to everything in our daily lives. But its best not to. Life is too short. Can't we all just get along and perhaps have a laugh?