Inspired by the recent Kotaku series, here's a look at my personal gaming space. This is where the magic happens. 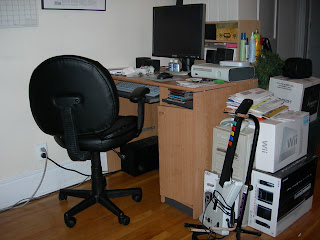 My Xbox 360 shares space with my PC. The 360 is hooked up this way because I bought it before I had an HDTV, so it seemed to make sense to buy the VGA cable and run the picture through my monitor. The Xbox's audio also runs through my PC speakers, which are pretty decent, if nine years old at this point. Yes, the Guitar Hero guitar is in an actual guitar stand. 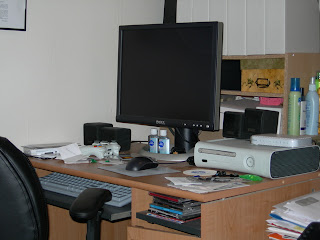 Close-up shot. That's the DS Lite over there against the wall, but it's hard to make out among some scraps of paper. Note identical bottles of hand sanitizer under monitor, from my Christmas stocking in two consecutive years. Notice also fiancee's skin care products on the dresser behind my desk.

Okay, those are actually mine. 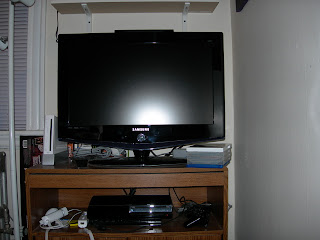 I turn 180 degrees and this is what I see. The Samsung and the PS3 are both just under a year old, which is hard to believe. You SDTV holdouts may think that going HD will not improve your life in any appreciable way. You are wrong. This thing still brings a tear to my eye. A progressive-scan tear, with 720 lines of resolution.

The problem with this setup is that I can't really jump around to play the more physically involved Wii games, but that TV stand is on a swivel so I can point it toward the middle of the room, where there is a little space. And also a ceiling fan that I've almost knocked down several times while playing Wii Tennis. 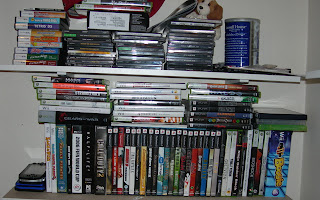 I keep most of my games on some wall shelves above the TV (the PSP is currently hanging out there, too, as you can see). Generally, the rule is that as soon as I can't fit any more games on the shelf, it's time to trade some in. I have not been following this rule too closely. The PS2 games that you see there are the ones I couldn't bear to part with, plus Karoake Revolution Vol. 3. The rest are some combination of games I really liked or games I couldn't be arsed to trade in yet. The coffee can contains my retirement fund.

If the spirit moves you, please post your own setup in the comments. I'd like to see how people are customizing their own game space.
Posted by Mitch Krpata at 3:42 PM

I really have nothing to post, though I do look forward to finishing the first floor of our house and being able to move all the electronics down there and set up all the game systems.

As it stands now, it's a 42" plasma that sits on a spare coffee table in the middle of our living room, and on the floor is a stack of (from bottom) CD player, two DVD/VCR combos, cable box, 360, and Wii.

I dream of the day I get to set it all up permanently -- it's been in this transitory floor state since we moved in last August.

I should really stop talking about this in your blog and go do some sanding down there. I'm almost caught up, though!