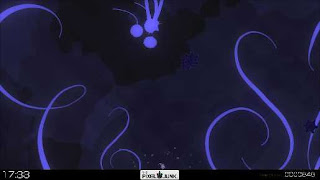 Above: PixelJunk Eden really doesn't look too good in screenshots.
We may end up remembering 2008 as the year that downloadable console games finally took hold. They've been helped to this point by a lackluster slate of disc-based games -- the year's two highest-profile releases so far have met expectations, at best, and massively underperformed them, at worst.

No, this year, if you want to play great games, you have to download them. I've nothing left to say on the subject of Geometry Wars 2. In fact, this weekend I made the difficult decision to delete it from my system in order to save both my productivity and emotional wellbeing. They say if you love something, you should set it free.

But that freed me up to try a couple of other downloadable games I've been itching to play. First was the surprisingly robust PixelJunk Eden demo. I kept expecting it to cut me off. Instead, it kept sending me back into the first garden to collect more and more bright shiny objects. Others have expounded at length about this game's curious appeal, which was more than evident in the demo. Given my brief playtime, I don't want to say anything definitive. But it struck me just how unlike major releases this game seemed to be in terms of aesthetics and gameplay, and how stale most of the disc-based games I've played this year have seemed in comparison.

And then there's Braid. What can I say about Braid? Very little, in fact, because I don't want to scoop my own review. I can say this: It's not the best game I've played this year, but without question it's the most original -- dare I say the most important? I don't know. Takes some time to sort out a question like that. In this moment, though, Braid certainly feels important. And it feels alive in a way that Grand Theft Auto IV, Metal Gear Solid IV, and any other bigger, better, and more badass sequel has yet this year.
Posted by Mitch Krpata at 9:52 AM

The well of downloaded games hasn't even dried up for 08 either. Bionic Commando was just released and there is still Ratchet and Clank, Flower and Fat Princess to look forward to! Its great to have strong downloadable games in the middle of the year when the "big" game releases all go on holiday.

Ratchet and Clank is going to be an interesting case. I loved Tools of Destruction, but part of me wonders how good a shorter version of that game would be. That is, if Quest for Booty is just like two worlds from a longer form R&C game, what's the point? I look forward to seeing if they take any kinds of chances with the format. I'll be downloading it for the weekend, for sure.

Another one I didn't play that looked good was Echochrome. Heard many good things about it.

Echochrome could have been a lot of fun if the game actually, you know, worked. Just a bit too buggy and imprecise when it was released -- maybe it's patched now, I'm not sure. Imprecise, inconsistent control kinda cripples a game of precision.

When XBLA and PSN were first announced, I really thought nothing of it -- why spend $500 to play a few $10 games? It seemed sacrilegious at the time. But my tastes in games must have changed after college; as much as I love turgid melodrama, I can't find the time to revel in it as I expected to.

Mitch, I'd strongly recommend you purchase PixelJunk Eden and play through to the end. The evolution of the garden's over the course of the game are subtle but surprising. The final few gardens are quite amazing, in fact, and with a good stereo-system, I'd rate the quality of the music up there with RezHD.

Just don't be fooled, the game is by no means "relaxing", though it certainly may appear that way, haha.

@cpe I never really got into Echochrome, even though I'm a fan of many other puzzle games that remind me of it, such as Crush and Kurushi (Intelligent Cube).

Echochrome is, as you said, buggy. While it's possible to rotate the world free and smooth, I felt that the game could have been much greater with at least some option to rotate the world with specific degree intervals. For example, push the d-pad in a direction for 15 degrees rotation. Leave the analog stick for smooth control, though.

I understand, however, that this may have destroyed the aesthetic quality of the game but I think it may have helped.

@Glenn, I'm looking forward to R&CF: Quest for Booty with high expectations. Insomniac did an excellent job with Tools of Destruction and I'd love to revisit that universe and to see whether they've managed to improve the graphical fidelity and to what degree.