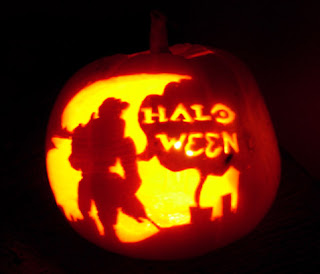 Above: I stole this from someone who stole it from Kotaku. God love ya, Google image search.
Ah, Halloween. I look forward to the day I am a suburban homeowner, so I can hide in the bushes and spray miscreants with my hose. Until then, I'll continue to spend the holiday as I always do: barricaded in my apartment. But first, some leftovers from the week that was.

-First of all, welcome to everyone who showed up here thanks to N'Gai Croal's Edge column, "The Importance of Being Easy" -- and there are a lot of you! N'Gai and I seem to be coming from the same place regarding game difficulty. It's not that games shouldn't be challenging, it's that they shouldn't be so punishing. I, too, was a big fan of the Vita-Chambers in BioShock. And it's a marked contrast from Far Cry 2's approach, which is to rob you of all progress since your last save when you die. So if you die and haven't saved after finding some diamonds, scouting guard huts, or whatever, you'd have to do all that again. Given the scope of the game world, that's difficult, and frustrating.

-As long as I'm stroking my own ego here, Iroquois Pliskin wrote a great post about survival horror, in response to the Brainy Gamer podcast from earlier this week. He makes an excellent point about Resident Evil 4. Why was it still so scary when it did away with the series' usual miserly distribution of resources, and instead emphasized high-octane action sequences? Because, "...the key element is the fact that you cannot run and shoot at the same time. This turns open ground between you and the enemy into the scarce resource; you are constantly torn between ceding and standing your ground." Insight, people.

-This must be a watershed moment: The New Yorker profiled Cliff Bleszinski. It's a good read, although there's not much that's new to the kinds of people who spend their time reading and writing video game blogs. Still, nice to see coverage of this sort in such a highbrow publication. I guess this article had a few high-profile detractors (including Matthew at Magical Wasteland), but I didn't see the problem with it. Hell, compared to Patricia Marx's shopping columns and Sasha Frere-Jones's pop music reviews, this is Pulitzer-worthy. (And despite Tom Bissell's noting Bleszinski's request not to be called "CliffyB" anymore, the editors proceeded to do just that in the subhed. Nice work, guys.)

-Speaking of all that, the magazine's profile of Will Wright a couple years ago was also good, but less unexpected, somehow. I can honestly say that the last thing I expected to see when I got this week's issue was a picture of CliffyB dressed in Marcus Fenix's armor and holding a chainsaw bayonet.

-Just in case you thought you were the only one struggling with what to play and what to skip, we're having the same problem at the Phoenix. There are just too many games for the space we have. (Partly, that's because this is the first holiday season that everything we've requested has actually shown up.) It's leading to some hard questions about what's worth covering. We'll try to get everything in if we can, even if it means running some stuff web-only, but it's disappointing.

What about you? What are you buying? What games have you decided to skip, and why?

I've let Fable and Far Cry slip past, with a fond promise that I'll find them again in the midst of next summer's doldrums. Once I finish up Yakuza 2, I'll have to decide whether to roll through Dead Space, or start Fallout instead and save the creepy shooter for the spring. I suspect I will end up passing on Last Remnant in favor of Mirror's Edge and Prince of Persia. The new Tales of Symphonia will just have to wait... my displeasure with Vesperia means Tales games must go to the back of the line until further notice.

Argh, Yakuza 2! I'll just have to admit to myself that I'll never play that.

Now that you mention it, Far Cry 2 sounds like the kind of game that would work quite nicely on a sweltering summer's day. It'd put you in the right frame of mind.

I'm traipsing through the DC Wasteland and Order of Ecclesia right now. Next up will be Dead Space. Then Left 4 Dead and Chrono Trigger for the DS. Fable 2 will be relegated to when I get around to playing the first (I'm a stickler for this, even if there isn't a direct continuation of story), Farcry 2 when I have a slower moment, and we'll have to see what else I can slip in to the time I have. Still want to replay the Quest for Glory series, but not seeing that happening any time soon.

Christ, Chrono Trigger! I guess I'll save that for February and March when I've got a bunch of conferences to attend.

I purchased Fable II but should have skipped it. I will also probably skip Far Cry 2 because I feel like I know everything about it already. It will probably go down in price more quickly than many of the others.

GoW 2 I'll probably skip too, since the only use for it is multiplayer and the only time I'll be playing Multiplayer is with a bunch of guys who all have copies.

Buying and playing: World of Goo, Far Cry 2, LBP, Fallout 3, Tomb Raider Underworld and probably Mirror's Edge. (There's a DS game here too somewhere, but I dunno what just yet). Chances are will buy Persona 4 for PS2 as well.

On the Fence(but probably getting kicked due to racked up costs and time considerations): Prince of Persia.

I'm definitely out on Fable as well. Sounds pretty good, but ultimately if I'm not reviewing it I can't make space for it. I await that mythical future day when I have time to play everything, and then I will play it.

Pretty sure I will still take the plunge on Fallout even if I don't end up reviewing.

I pre-ordered Far Cry 2, and after an initial burst of worry-that-I-made-a-mistake am very happy. I quickly got Fable 2 as well, though, which is very nice, and a necessary relief from the bleak, surreal, Conradian nightmare of FC2.

I'm skipping Dead Space. The UI looks lovely, but I don't have an HD tv yet, and horror isn't my main priority.

I don't own a PS3, so LBP is, depressingly, out. It is first on the list when I get a PS3, probably next year.

Mirror's Edge will probably end up being a day-1 purchase. I've been so excited about that game for so long.

The only thing left is Fallout 3. I'm a huge, huge Fallout devotee; I'm worried and excited in equal measure. It is a definite purchase, but only when I have the space to give it the treatment it deserves.

So for now, I'm roaming around Africa and Albion.

Oh, and I need to import Order of Ecclesia asap. Us Europeans don't get it until NEXT YEAR. Thanks, Konami

Far Cry 2 has sat unopened for a week. I've put maybe twenty minutes into Spider-Man: Web of Vengeance, which I would probably completely ignore if it didn't combine the two things I tend to write about. I've played a little bit of Fallout 3, but had to put that on hold in order to finish up Fable. And although I've put a lot of time in LBP, I've still barely touched the level editor. That is definitely something for the post-holiday slump.

Garrett, Far Cry is definitely the kind of game you need to be able to sink your teeth into in order to appreciate it. It's about the slowest-paced shooter I've ever played, but so absorbing. Definitely a good idea to wait instead of trying to cram into a quick session or two.