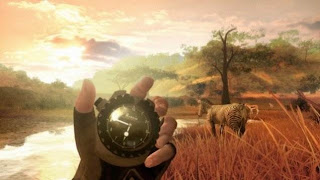 Above: Counting the seconds until a Gamestop.com user says something silly
As regular readers of this series are aware, Gamestop.com users generate enough hyperbole to power 60 million American homes for a year. Everything they talk about is a surefire game-of-the-year contender, based often on screenshots or clips at Gametrailers that feature no actual gameplay. Which is why I was a little surprised at the tepid response to Far Cry 2. Oh sure, the plaudits are numerous, but compared with what users have to say about most high-profile games, this is a drubbing.

This game is going to be good. Its gameplay looks good, the story should be good. They even have multiplayer this should be ok, still debating on whether it will be good. This is definitely a game to look at and ask for christmas so you have time to rent it.

I've never seen a Gamestop.com user hedge his bets so much. If guys like Bond Fan were running the economy, we wouldn't be in this mess. "This mortgage-backed security should be good, still debating on whether it will be good."

"TUTZO" lays down the ultimatum:

After reading the multiplayer reviews, i am a little hesitant as to the playability of multiplayer in the long term. The map editor and the main story is what is keeping this title on my pre-order list. I can't wait to create some new school versions of classic Counter Strike user created maps..... AWP Map REDO...anyone?? Although it will be competing with Fallout 3 and Fable 2....which are also pre-ordered..... it better be good or this game is getting shifted to the bottom of the pile.

He'll still buy the game regardless, but if it's not good it's going to the bottom of the pile, where presumably it will have plenty of time to sit and think about what it's done.

"gamestopper" has the bleakest outlook:

You have to reserve it to get 3 more hours of gameplay and a fold out map which is cool, but it looks kinda bad because the farcry predator was always the same as the last ones, and i hope it doesn't have that, and if i reserve it it's just a waste of money because there's no demos of it or actual good game play, so i wouldn't buy it, but rent, but to me i give a thumbs down. This is my opinion.

He almost sounds like he's being forced to play this game, and renting is the least painful way he can choose to do it.

Maybe gamestopper should be a little more stoic, like "jtk43":

I will probably buy this game soon after release.

I mean, my God, what other choice do you have?

These are always so entertaining. I tried reading these for myself over at Gamestop.com, but they never make me laugh like they do when I read them here. Please keep 'em coming. Also, can I recommend Mirror's Edge? I'm sure such a unique game concept will generate some wildly hilarious USP's.

You should do it across multiple ones, too, like Gamespy and of course IGN. The holy trinity of suck and its worshippers words, analyzed and brought to you my Mitch Krpata!

Reminds me of when I scroll down to read the comments over at GameTrailers. Gosh, they are terrible!

I love these entries. I pity you for having to sift through all these ridiculous, barely intelligible comments, but the end result is hilarious. Well done.