The ballad of the first-gen PS3 owner 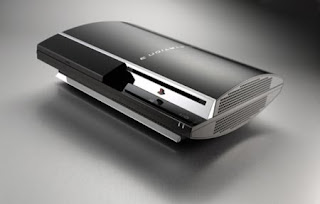 Above: The 60GB PS3. I'd have photoshopped a red Cylon eye on the disc drive if I knew how.
Not only did Sony once rule the video game world, they dominated it. The thought of the PlayStation brand ever faltering seemed laughable. But they've been blowing it with the PlayStation 3 from the start. And every time they seem to be righting the ship, another rogue wave comes along.

You've probably heard the latest news of a clock malfunction plaguing owners of the older, "fat" design. I don't have much to add about it. But I just want to take a second to list the ways in which being a first-gen PS3 owner has dicked me over. I bought a PS3 because I needed one for work, but also because it was a PlayStation, dammit, and the name meant quality. Sony had built up serious brand equity over the lifespan of two world-beating systems. Why would you bet against the PS3? Because you were smart enough to know that nothing lasts forever, I guess.

Anyway, I'm not mad or anything, and by the time I get home tonight I expect that the latest issue will be taken care of. I just can't believe these things all happened:
On the plus side, I have backwards compatibility. So I've got that going for me.
Posted by Mitch Krpata at 9:00 AM

On the plus side, at least you're not playing RROD roulette with a 360.

As I've mentioned before I've owned now one but two PS3s. I bought a 40GB model in 2008, played GTA IV, Metal Gear Solid 4, the original Uncharted, and tried several other games.

I loved Uncharted but MGS4 was a mixed bag. Then E3 2008 showed that Sony had nothing else to offer. It was a real failure and I sold it and rebought an Xbox 360. Yes, I had abandoned the Xbox for the PS3 and regretted it.

A few months ago, just after the Slim was released, I convinced my wife it was time to try it again. Uncharted 2 was brilliant, easily as good as any other shooter I'd played, and possibly better.

But with Uncharted 2 in the bag, I realized nothing else charmed me. Endless multiplayer only shooters, average Japanese RPGs, and esoteric PSN titles can't keep me interested when the Xbox 360 has the games I want.

I had four Microsoft Xbox 360s fail on me but in the end it was a win. Why can't the PS3 make me feel that way?

I bought a PS3 under the same circumstances (I didn't want one, I needed one to do my job), and I wonder if it makes me less tolerant of its bullshit. As a Blu-ray player, I have no real complaints (aside from having to switch the audio every time I want to move from 5.1 to the TV's speakers). But as a console it seems like an expensive device with a mediocre catalog and a near-constant drip of little annoyances. Just before this clock fiasco I put in Heavy Rain for the first time, and was greeted with a 45 minute non-"backgroundable" download. As someone who works and goes to school, telling me I'll have to wait 45 minutes before I can play might as well be saying "come back tomorrow".

Tell you what PS3, YOU tell ME when we can play.

Well, I have a Wii that I haven't played in months, and haven't yet finished any of the games I own for it.

Honestly, if they released a PS3 with a cylon eye and which said "by your command" when you put a Blu-ray in the drive, I would have to order one immediately.