I'll be checking out Battlefield: Bad Company 2 this weekend. It's impossible not to compare every single aspect of it to Modern Warfare 2, right? Is it even worth resisting? I'm just hoping to fly helicopters into things.

Here are some links and stuff.

-Big ups to my uncle Mike, who actually did Photoshop a Cylon eye onto the PlayStation 3: 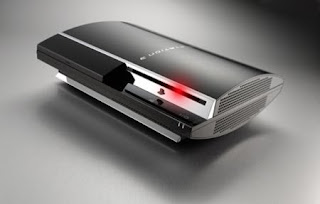 The PS3 was created by man. It rebelled.

-I'm hesitant to go too far down this path, because we shouldn't be giving a litmus test for enjoying a game, but I've been struck by the response to Heavy Rain I've seen among gamer dads. A sampling:

If you've ever been responsible for a child, either as a parent or a sibling, this game will make you feel shaky--the verisimilitude, much of the time, is stunning. There were many moments where I was more involved with my character than I've ever been in a game. I was the main character at times.
-Bill Harris, Dubious Quality

I am Julian. I am a father. I would do anything – without hesitation – to protect the 10 pounds of meconium and emerging sentience sleeping in the baby carrier in my right hand. Thankfully, I have never been tested.

Heavy Rain is, ultimately, about this: testing the resolve of parentage. That makes it a difficult game to play, as a parent.
-Julian Murdoch, Gamers with Jobs

I've spent a couple nights with Heavy Rain now and I think it's really special. If you're a parent, (especially a Dad) this game can be pretty difficult to play at times. In fact I'm curious if people who don't have kids will end up getting as much out of it. I don't know if it's an 89.85%, or a 9.7 out of 10. What I do know is that after a late night playing it, I sneak into my son's room and hug him before I go to bed.
-Gabe, Penny Arcade

When I read the varying reactions to Heavy Rain, I can't help but wonder what each player is bringing to the table. I think it's a game you have to make an effort to appreciate, but maybe that's easier for some people than others. Although I'm not a parent myself, I am at a point in my life where that's probably going to happen sooner than later. Maybe that mattered to me when I played the game. I dunno.

-The Rock Band Network store is live! This seemed like better news before I actually looked at the tracklist. I still expect great things from it.

-Great column by Jamie Madigan at GSW about the psychology of gamers called "The Glitcher's Dilemma." I love stuff like this. It's a game-theory look at playing multiplayer games in which there's a cheap path to victory, like the Zerg rush or the javelin glitch in MW2, and how it's mutually beneficial if players choose to overlook such glitches. Also interesting: the moronic first comment in response to the article.

-The funniest thing you will read this week is a re-post of a Newsweek article from 1995 about the uselessness of the internet. Among the assertions by the author, Clifford Stoll:
It seems like you'd have to have the benefit of hindsight even to get this much stuff wrong. This is why making predictions about anything is a fool's errand.
Posted by Mitch Krpata at 1:00 PM

There are many copies.

And they have a plan.

Heavy Rain was boring to me at first, but then I played a fighting scene and almost had a heart attack. Those parts are SCARRY FUN!

Not with you on "the moronic first comment" on the GSW article, which currently reads: "Not Zerg rushing in a game where Zerg rushing always wins is just plain stupid. It's not cheating. [...] Either the game developer needs to patch the game so that rushing isn't so easy and powerful, or you need to increase your skill level. Refusing to use a "cheap" strategy because it's "too good" means that you're choosing to remain in the kiddie pool and stunt your skill growth."

It's not a moronic comment because it's pointing out the problem in the prisoner's dilemma tables the article writer is using - they're two dimensional, representing only one iteration of the dilemma, with only two parties involved in the transaction ("you" and "them").

Here the alleged "win/win" conditions are not the real win/win. By parties agreeing by some code of honour (or enlightened self-interest) to not exploit a flaw in the system, they're robbing the system of the evolutionary pressure to evolve, and they're robbing themselves of the competitive environment necessary for their own skills to grow to a higher plane. In the long term, win/win involves understanding that "fair play" in a gaming context means nothing more than playing by the rules, and that where that, taken to its furthest extreme, results in undesirable play it's a fault in the rules, not in the players.

It's something that David Sirlin writes fairly famously on; here, among other places.

At a more strictly logical level, it's widely recognised that an infinitely iterated prisoner's dilemma is the only version which promotes trust; iteration is missing from the writer's models but not from the environment he's modelling. See here.

(Sorry, had to add - the reason why it's important that iteration is important is that it shows the solution to the problem, which is to say a persistent and memorable identity and repeated interactions between the same identities. The reason behaviour is, on average, more "ethical" in MMOs than shooters is (1) that your achievements are tied to a persistent identity, (2) that identity is tied to memorable persistent features (class/race/name/chat style/character build) that help other players remember you, (3) players from one session with you are able to meaningfully communicate about you to other potential players, and (4) there's the luxury of time necessary to question you about your understanding of game rules, game etiquette, and your priorities.

It means that in MMOs there's effectively no "last iteration" of the dilemma - there'll always be a way for your actions to have consequences - whereas in shooters every iteration is a "last iteration", with no reason not to "defect". The solution to ethical play in shooters is a greater persistence of identity.

Fair point! I read it as simple chest-beating. Thanks for some interesting links.