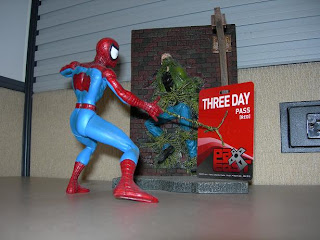 Above: Sadly, the best picture I took all weekend.
No matter how many billions of dollars I see the industry earning, no matter how many people I see on the train playing iPhone Peggle, no matter how many times I try to tell people that games are firmly in the mainstream, there's still a part of me that doubts the worth of playing games. Some small part of me is still fighting it. Some voice tells me I'm wasting my time.

Oh, I can tell you stories. Like the time in sixth or seventh grade -- you know, the age when it starts to go wrong for so many formerly happy kids -- when I found myself talking to an old friend from the neighborhood on the bus ride home. We'd spent a lot of time together when we were younger, but not so much lately. He asked how my weekend had been, and I told him that I had rented RoboCop vs. Terminator for the Genesis. He seemed interested. He asked questions. I told him all about it. As I recall, it was a pretty sweet game.

A few kids got off the bus and some seats opened up, so we moved around to sit with some other kids our age from the street. I shit you not, this is the first thing this kid said to them: "Remember how nice it was outside this weekend? Well, Mitch spent all weekend inside playing video games."

Or the time in seventh grade when I asked my parents why they'd decided not to get me any video games for Christmas, even though my list had been full of them. I wasn't mad, just curious. "We think maybe you've played enough video games," my mother said, gingerly, "and it's time for you to move on to other things."*

You get the point. Enough times during my formative years, things happened to make me question whether my hobby was normal or acceptable. It sounds laughable now. We're talking about video games! What could be more normal than that? But it's ingrained, and that little voice speaks up every so often, asking me what the hell I'm doing with these children's toys.

That's why I was a little bit wary of attending PAX. Because that voice was saying to me, "You play games, but you're not a 'gamer.' You're not like these other guys." The denial was deep.

I walked into the convention feeling jaded, and I walked out feeling energized. People were sending out enough positive vibes to power all the electronics in the building. I was swept away by the energy of the crowds, and inspired by one-on-one interactions with several writers I admire. There was laughter and there were tears. And there was, above all, an unabashed love of games, shared by so many, expressed without constraints.

Over the next couple of days I'll write a little more about the PAX East experience. I don't doubt that, before long, that little voice will start speaking up again, possibly after I've ragequit an Xbox Live game against 13-year-olds. But if I were to say nothing else about PAX, I'd say this: Now I have an even better reason to tell that voice to shut the hell up.

*This story has a happy postscript: three years later, all I got for Christmas was video game stuff. I asked why the change of heart. My mom sighed and said, "Well, you like what you like."
Posted by Mitch Krpata at 9:00 AM

Bravo, and well said. I too remember loving Robocop vs. Terminator, and I too remember that conflicting with the middle-school perception of what was cool. Though in my experience, middle school boys were totally into video games and just didn't want to admit it in front of girls. I particularly remember one of my friends telling us to shut up talking so loud about Chrono Trigger - girls were coming for God's sakes!

I have a lot of friends who aren't "gamers" in any sense of the word, and I consider that a healthy thing. It has, though, been hard to relate to them when their default opinion about one of the things I'm most passionate about is that it's child's play at best and a waste of time at worse. I just have to keep telling myself what you've alluded to here: that the real childishness is hiding your passions for the sake of others. Good words.

I feel the same way occasionally, but I think I'd feel worse if my parents had gotten me a gaming system before Xmas of my senior year of high school.....they'd often have similar reactions when I told them that what my friend and I did when we hung out was play video games.

My parents were never anti-games when I was growing up, they bought me a Genesis when I was 5 and were fine with my hobby ever since, but our culture in general tends to still exude games being nothing more than toys. Most gamers don't even consider games to be much more than fun diversions.

I have the same problem soft nonsense has so much so that I pretty much don't talk about games with 90% of my friends. They all know I love them, and we play a lot of Smash Brothers Brawl together, but they all grew out of games in high school.

It doesn't really bother me though, there is more to all of us than just our obsession with games. I'm sure all your friends have hobbies you don't discuss with them because the interest isn't mutual.

Oh, Mitch. I love this post, much as I have been been loving following everyone's chattery, hilarious tweets form PAX. I truly wish I could've been there, and look forward to reading your further posts on it.

I, too, hear that little voice. A while back, the voice and I had a chat. I explained to it some stuff about about games, and about me, and about how the two relate to each other.

When I finished, the voice nodded, smiled, and went away. I dunno if it'll stay gone forever, but I'm optimistic. :)

TBK Sells said...
This comment has been removed by a blog administrator.
9:12 PM