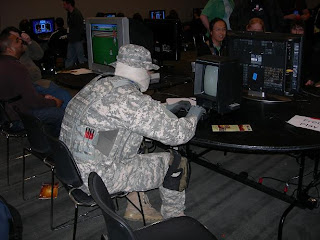 Above: I didn't photograph any of the panels, so here, have a picture of a Modern Warfare cosplayer on a Vectrex.
PAX is a feel-good event, there's no doubt about it, and I'll have more to say about the good vibes in later posts. Tucked among the warm fuzzies were some thought-provoking panels, which covered a wide range of topics and featured real talk from sharp minds. I caught as many as I could, although not as many as I would have liked, and came away impressed. I've often thought that the way to get people to take video games seriously is to take them seriously ourselves. While all of the panels left room for levity, they also consisted of earnest dialogue between people who have progressed past the point of asking whether the conversation is worth having.

I hit up as many journalism panels as I could, starting with "Journalists vs. Developers: The Ultimate Grudge Match." The panel nearly lived up to its billing, with Harmonix's John Drake deploying one M-rated word after another as he excoriated the worst excesses of game reviewers. I had to wonder what he was so mad about. It's hard to think of a developer that consistently gets better reviews than Harmonix does. (Valve, maybe.) I also appreciated Chris Kohler's candor about the limitations of game reviewers, which can be hard for any of us to admit.

The next day started with a huge line for "Kotaku vs. Croal: In Search of the Best Games Ever." Stephen Totilo and N'Gai Croal presented a game they'd created, called "Canon Fodder," which passed a list of the top 10 games of all time through the hands of one game developer after another, until they'd molded it into perfect shape. You can read about their ongoing efforts at Kotaku.

During the panel, Chris Dahlen tweeted that the audience participation made it the perfect panel, and I'd agree with the sentiment. Beloved games were removed from the list to jeers from the crowd, and new ones were added to hearty applause.

(I wish only that I'd had the guts to make the case against The Legend of Zelda: The Ocarina of Time in the top spot. I have such a vendetta against that game.)

The last journalism panel I caught was on Sunday, when I attended "Everything You Always Wanted to Know About Game Journalism..." with Kyle Orland, Susan Arendt, Lev Grossman, Gus Mastrapa, and Chris Grant. This was one for the aspiring writers at the convention, as Kyle kicked off by asking how many in the crowd wanted to write about games, how many currently did, and how many were getting paid to do so. The number of hands shrank each time.

I asked a question about whether we serve our readers by reporting press releases as news, and I think I saw actual steam shoot from Chris Grant's ears. He gave a reasonable response, which might have been better than I deserved, although I'd still maintain that I have trouble finding the original content that sites like Joystiq and Kotaku do well (like this!) amid the grinding gears of the hype machine.

Sadly, I was thwarted in my attempts to catch the "Death of Print" panel, featuring Chris Dahlen, Russ Pitts, Julian Murdoch, Jeff Green, and John Davison. It was held immediately after another panel I attended in the same room, at the end of which they cleared us all out for the massive line that had formed outside. I imagine it will be made available online somewhere. I had planned to go to others, as well, but exhaustion and poor time management took their toll.

Finally, there were the Penny Arcade panels, which I had expected would be so packed that I wasn't planning to try to go. But the main stage at Hynes has a balcony that nobody seemed to know or care about, and it turned out to be easy to stroll in and find a seat, sometimes a decent one, without much trouble. I attended all three, and they took basically the same form: Gabe and Tycho onstage, taking questions. Their rapport translates well to the live setting, which is surprising from two guys who take anti-anxiety medication. In their position, I'm sure I'd have been breathing into a paper bag instead of talking trash about Duke Nukem deathmatches.

The middle panel was the "Create a Strip," during which Tycho did most of the talking, and Gabe spent most of his time drawing Monday's strip, with his desktop displayed on two massive monitors. It was impressive. During the Winter Olympics, I found myself explaining to people that while I wasn't enamored of events like curling or cross-country skiing per se, I'm always fascinated to watch the best people in the world excel at something. Watching Gabe draw and color Monday's strip felt like that. His pen moved with grace and ease, even as the perfectionist in him would veto one attempt after another at drawing, say, a character's left eye. He even found the time to sneak in some dick jokes, which you could even argue is the lifeblood of Penny Arcade.

The PA panels were also the scenes of some of the convention's most enduring moments, but that's a subject for another post.
Posted by Mitch Krpata at 9:00 AM

Well this explains one mystery at least. It appears that I somehow managed not to attend even one single panel you were at. Looks like the closest we came was before "Death of Print", where you were going out while I was going in. Easy to understand though, given how brutal the lines were.

It was kind of amazing how easy it was not to meet people. Several times I knew I was in the same room as somebody I wanted to say hi to, but the crowds made it difficult to do, especially when the enforcers hurried us out to make room for the next panel.

The impression I've gotten from the general Internet talk is that PAX East wasn't quite as smooth or organized as last year's Seattle endeavor, where you could usually sneak in a few words with journalists and developers/PR people if one was so inclined. Or one could just make up a few bingo cards with various game journalists and play "Kohler!" (the word shouted in lieu of "Bingo!") with your friends like I did.

Mitch, good to see you again. The main thing I took away from PAX was that every panel member really really wanted to talk all day with all of us, and answer as many questions as possible. Time was the only limiting factor. That was a good feeling, to actually have someone I've never met before care about my opinion, and understand what the hell I was talking about without me having to dumb it down.

Katrina had a good time as well, she is already discussing what costume to wear next year!

I'm glad somebody else wants to see Ocarina screw off to the lower end of the list.

cpe, I've heard that said, but without any frame of reference I thought the convention was quite smooth. Biggest problem I had, in fact, had to do with the convention center's own security people, and not anything to do with the show organizers. But get that many people together and something's bound to go wrong.

Steve, same here. Nice to be in a place where everybody's got a common (sub)cultural heritage. That never happens. For next year, I'm seeing you and Katrina going as Gordon Freeman and Alyx Vance.

Simon, I'd even have taken it off the list if I'd had bodyguards to protect me. Maybe I could have pacified people by suggesting A Link to the Past in its stead.

despite said visible steam – i've been seeing an ENT guy for a while about that! – appreciated being given the opportunity to *come correct* on that question for the audience. as you can imagine from my response, it's the question we get asked the most, perhaps right behind "are video games art?".

If your concern is *navigation* then, well ... shit. I have to agree. We do a pretty terrible job for people hitting www.joystiq.com; however, the great stories will inevitably rise to the top, get linked more (this morning's Breach story is doing quite well!), and in turn get more attention.

This topic is really an entire panel on its own!

As usual, I'm not nearly as innovative as I think I am. Thanks for taking my question, though, Chris, and for participating in a great panel.

Here's a suggestion for navigation, at least for RSS subscribers. Right now I'm just subscribed to the Joystiq master feed, and I know that I could break that down into a few different feeds. But I'm not so interested in sorting my subscriptions by platform, which seems to be my current option. What about something like an "editor's choice" feed that syndicates the best original reporting?

You can use the @original tag to filter any original stories out, or stories that have some original contribution.

Thanks, I'll do that.