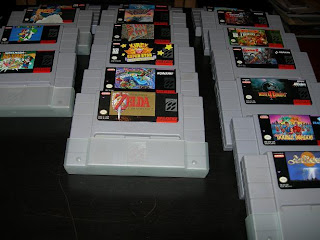 Above: It's so hard to say goodbye.
I carried them with me for years, through cramped dorm rooms and ratty apartments. Whenever I packed up to move again, along came the dog-eared New Balance shoebox, whose ragged corners I'd reinforced with electrical tape. Its contents were the best of the 16-bit era. A Link to the Past. Mega Man X. Super Castlevania IV. Donkey Kong Contry. Contra III. Super Mario World. F-Zero. And more and more.

Problem was, they weren't mine.

In my freshman year of college, I made friends with a guy whose passion for video games dwarfed that of anyone else I'd known. The man was an encyclopedia of game knowledge. No detail escaped his attention. He had a penchant for launching into impassioned monologues at the mention of almost any game. When he found out I had never played Castlevania: Symphony of the Night, he all but forced me to go buy it. (He was right about it -- it's now one of my top-10 favorite games.) He extolled the virtues of Tenchu: Stealth Assasins. I picked that one up too, and when I said it seemed merely pretty good, he said, "Don't even talk to me until you've got 100% clearance on the first board." He seemed to mean it.*

Shortly before spring break, we found ourselves reminiscing about Super Metroid, and hatched a plan to play through it in one sitting. I'd bring the game and the system to school after the break. For his part, he brought that box full of classic games, most of which I had never played before. I hadn't even bought a SNES until well into the 32-bit era, and it was exclusively to get my hands on a copy of Super Metroid.

Beating Super Metroid took only a short evening -- it's easy to remember it as this massive game, but even if you're not doing a speed run you can polish it off in about 4 hours if you know what you're doing -- but we spent the rest of the semester, along with our neighbors, polishing off the rest of what he'd brought. Nothing unified the residents of that floor like the Super Nintendo. I have a memory of leaving the common room while one kid was deep into Super Mario Bros: The Lost Levels, only return hours later to find him in the same spot. He eventually beat it, somehow.

People have a habit of simply vanishing when the school year ends, which is how I found myself with custody of the games over the summer. Suddenly, no one was left in the dorm but me and the box of games. That was a tough summer -- I'd run out of money over the course of my freshman year, and my few attempts to find a summer job came up short. Sporadic temp work doing data entry was the best I found, so I had plenty of time to plow through that SNES library. It was like compressing the first half of the 1990s into three months.

I brought the games with me the next year, figuring I'd return them whenever I saw him. But somehow I just never reconnected with my friend. He was a senior by then, and spent half the year in L.A. I was dealing with my own problems, the usual post-adolescent stuff, too focused on my own gloom to look outward. He graduated and moved on, and I scraped through the next few years, always with the SNES games in tow. Over time, I started to think of them as mine, although I never forgot that they weren't.

Which is why, when my friend emailed me out of the blue a couple weeks ago, my first thought was: "Damn, I'm going to have to give those games back." Not that I would seriously consider keeping them -- there's no grandfather clause here. And the advent of services like the Virtual Console means that playing perfectly emulated versions of those games is always an option (not to mention that I'd actually be able to save my game if I downloaded A Link to the Past). Nor was he getting in touch just to get the games back -- he didn't even remember that I had them in the first place.

I met him for dinner, with the tattered New Balance box in tow. Letting go of the games was actually easier than I thought it would be. We tend to get attached to these physical objects, but they're really only symbols. I carted them around with me for eight years, even though I stopped playing them after one year. They were a reminder of what had seemed like a short-lived friendship, and the brightest spots in an otherwise dark period. And as we sat there last week, trading meticulous tales of our exploits in BioShock, Fallout 3, Resident Evil 4, Far Cry 2, and on and on, I was happy to realize I didn't need to carry those games with me anymore.

*Not that I ever pulled it off! Tenchu is impossible.

There's something about dorm life that adds another dimension to gaming. One of my friends and I still fondly remember an afternoon we spent playing a whopping 300 rounds of Bushido Blade without a break.

Oh wow, I fondly remember my days of acing Tenchu levels (sorry Mitch) and Bushido Blade! OMG, that game was so amazing. They should release that on XBLA (or a knockoff, to be more realistic) for an experience like none other. One hit kills and a spectator mode. That would be awesome

Boy, I know I played Bushido Blade, but I can't remember when, where, or with whom. It must have been college, but... I just don't know. I just remember that of the two samurai, mine was always the one slumping on the ground at the end.

That was amazing. What great stories videogames can leave us with.