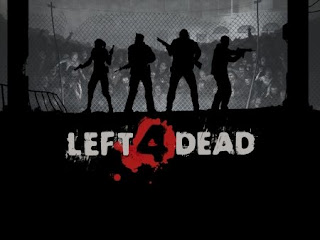 Above: Only teamwork will get us out of this accursed Web alive
Oddly, although Left 4 Dead only comes out today, Gamestop.com has already switched from their previews to reviews. You'd think that wouldn't be enough time for their users to appraise the game. You would even think that they'd want to play the full game before trumpeting their thoughts and throwing around phrases like "game of the year."

You would be wrong.

"PFCOKAT" reaches for the brass ring straight away:

By far one of the best games I've ever played. If you like house of the dead and resident evil, you'll love this game. The demo alone has a high replay value and it's only two stages and doesn't even have all the capabilities the actual game provides... there are no complaints for this game whatsoever, if you're only buying one game for christmas, this is definitely it.

I know this is the part where I usually make a joke, but... How can you judge replay value after a week? How can you know something is one of the best games you've ever played when you've only played the demo? It's just nonsense. On the other hand, nothing PFCOKAT wrote here would disqualify him from employment at most leading game review sites.

That is, if "Kaboose102" doesn't get snapped up first, thanks to this back two and a half somersault:

I think this game is a valve personal best. Heck i would even think its better than portal and half life and Team Fortress all put together. It just a simple zombie survival game and thats all. Buut dont get me wrong its not soemthing where u just fight zombies

The half twist at the end really put him into medal contention.

I for one always wanted a great zombie survival game since I first saw dawn of the dead.

It's about time someone made a zombie game influenced by Dawn of the Dead. Okay, admittedly he specified a "great" game, and surely there haven't been any great zombie games since 1978 -- wait, he's talking about the 2004 Dawn of the Dead remake, isn't he? Get off my lawn, whippersnapper!

Lots of games recently have made moral choice a key part of gameplay, and according to "L4D demo Gamer," this one is no different:

In the game you start off with just a pistol and have the very important decision, Uzi or Pump action shotgun, it mean life over death.

And you thought you agonized over whether to harvest the Little Sisters!

"Penguin" gets a jump on the official strategy guide with these useful tips:

Some zombies have some bosses like the evil witch, if you point a flash light or shoot her she will hunt you down and kill you. The tank on the other hand, will see you if you go near that big guy, he's a big giant zombie, its like a zombie on steroids. I call him "The Hulk", because he looks like the hulk but just yellow! Eventually, I heard people in my party calling them The Hulk, and my friends call him that too!

I feel awful about this today. I feel like a jerk. It made this kid's day that his nickname caught on. What kind of monster would you have to be to make fun of him for that? It's like going to his birthday party and popping the balloons. While he was giving all the balloons names.

I am dead inside.

No, kiddo. You are just opening the lid and letting perspective inside the games review box.

You are not dead inside, you just have standards.

I definately think that a player should play a whole game before posting their review. It's unfortunate that the user review sections of retailer and review aggregators have become so exploited. I used to rely on user reviews but their value has been significantly diminished.

The site owners and moderators are to blame. Better administration, moderation, and management could fix this problem. Unfortunately, I don't think that Gamestop has a vested interest in improving the dialog between it's customers.

Bad user reviews asside, the Left 4Dead demo for Xbox 360 set a new standard for what a demo should be! The demo includes one of the best in-game cut scenes that I've ever seen and the first two levels of the game. The demo can be played as a single player or with 4player online coop. The matchmaking and lobby system are seamless. The net code is solid.

Last but not least, the gameplay is awesome. I can't say this enough. The cooperative experience in expert mode is unparalleled. Your team of four must absolutely stay together. It doesn't matter how good of a shooter you are, if you run ahead of the group, you're dead. If you fall behind, you're dead. Team mates get pinned or knocked down and you'll have to save them and then revive them. If you don't help a downed commrade, they won't be the only one to die. There is positively no way an undermanned party can make it through to the end.

L4D demo gamer may not have given the game's morality it's due. There never seem to be enough health packs and emergency pain pills to go around. Players are often faced with the choice of hording that extra med kit or handing it over to their wounded partner who clearly won't make it otherwise.

Thus far, my favorite experience came Sunday afternoon. My team mates and I were fighting our way down a street filled with zombies in the game's first level, 'the Apartments.' We were 50 yards away from the safe room that marks the end of the level. Someone set off a car alarm and 50 zombies swarmed our party from every direction.

I told everyone to follow me and make a run for the safe room but they were all caught up in the shooting. I managed to break out and get to the safe room, closing the door in the face of the 10 zombies that were chasing me. No one else made it. I could have faced a 50/50 chance of getting killed and gone back and tried to save them. Why risk it? They should have listened to me.

Makes you perfect for Versus mode then, dontcha think? /rimshot

It's obviously much to Gamestop's benefit to encourage people to feed the beast when a new game comes out. What could be a better incentive to buy a game than dozens of people calling it the game of the year or even the best game ever, and scoring it a 10.0? Can't blame them at all for giving people the forum. It's just good business. It's the consumers who get burned.

Scott, you do make the game sound pretty awesome. I look forward to playing it, even if it is the tenth game or so to be anointed the game of the year by the masses so far.

Your "user-submitted reviews" posts remain one of my favorite things to read. Keep 'em coming.

I always love the user-submitted reviews writeups, and this one is the best (if only for Penguin). I do feel bad, though, that I haven't commented on any of your more serious articles of late and yet am here grinning at the silly one.

If he was a fan of the original Dawn of the Dead, he would have demanded slow zombies.

That being said, I'm enjoying the game quite a bit so far. I predict it'll have shorter "legs" than TF2 though.

It's not GOTY material, but it's a classic.

And it's okay to say it has plenty of replay value as long as you value versus mode or co-op campaigns for shooters. I could play this thing for 8 hours straight and lose track of time!

Oh and of course, the comments are really bad and I am amused by your assembly.

@Etelmik Oh, but of course.

On GamingSA, we have our own little reviewer, ACC1, who seems to miss the point of the game entirely.

"From what ive seen / played in the demo, finished single player on advanced 2x finished online advanced 4x and had a go at extreme but fail about half way threw each time. I still cant stand the fact that most the stuff in this is from HL..

I mean did anyone else notice that the guys who made HL have made a mod under a new title / name and are selling it for $50? Or did only I spot that?

Seems unfair and over priced to me.

The full game would want to have ALOT more levels, the 2 demo levels are short, you'd want 20-25x that for a full game if not more other wise youl finish it in 4-6hrs.

When modding groups out there put out FREE stuff it makes this look stupid, altho it is pretty well done its still just that a mod... I seen some of the things from this in HL like those string/rope shooting zombies, thats so old.. I never had HL2 but I see ALOT of thing similar from HL1 and CS from back in the day.

Its probably worth $10 tho for a few hrs play. I wont give it a cent more from what Ive seen so far.."

ACC1, what you played was a demo, only a sample of what the whole game will offer. *sigh*

It's hard for me to be offended by user reviews. It's not like I think they have some redeeming feature as written content. It's just that these reviews basically all come from kids. You can't really fault someone for being immature when they're young.

Glad to see you are ashamed of yourself ;)

Left for dead or Far Cry 2 for Christmas entertainment (on PC)?

Both great choices. Ultimately it comes down to whether you want a great multiplayer or a great single player experience. Far Cry is a bit more weighty and important, while Left 4 Dead is stripped to to its essentials. They both achieve what they set out to do -- just depends what you're looking for. (I played both on consoles.)

really great article.. thanks for sharing